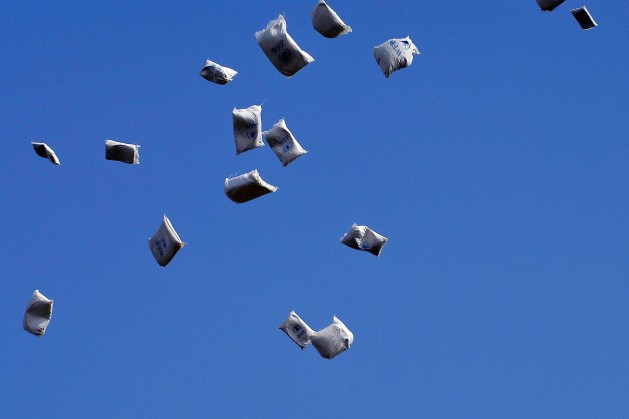 The UN prefers to deliver humanitarian assistance by land rather than air. UN Photo/Fred Noy.

UNITED NATIONS, Jun 3 2016 (IPS) - The UN has begun plans to deliver aid to besieged Syrian towns by air but says there are a number of obstacles in the way and that delivery by land remains its preferred choice.

The UN had promised to plan the air drops if there had been no progress made on access by land to besieged areas by June 1.

That deadline has now passed, with negligible improvement in access, and UN officials Thursday faced numerous questions from journalists about the promised airdrops.

The World Food Program “is implementing its plan to move forward with airdrops” but “there are a number of obstacles in the way,” Stephane Dujarric, Spokesperson for the UN Secretary-General said here Thursday.

One of the numerous obstacles for aid deliveries by both air and land is obtaining the required clearances from the Syrian government, UN Senior Adviser, Jan Egeland told journalists in Geneva.

“Of the 19 (besieged) areas, 16 are besieged by the government forces or government-aligned forces,” said Egeland.

“So lack of approval is the main reason, but also fighting on the road, negotiating new roads, and negotiating security clearances by armed opposition groups is also delaying and making it difficult in many places.”

“I think everybody agrees that to go by land with 100 tons in a few trucks is better than a few tons by helicopter,” -- UN Senior Adviser, Jan Egeland.

Delivery of aid by air is considered more costly and less efficient than delivery by land.

As 15 of the 19 besieged areas are urban or semi-urban, Dujarric also noted that deliveries would need to be made by helicopter not plane.

“I think everybody agrees that to go by land with 100 tons in a few trucks is better than a few tons by helicopter,” said Egeland.

However Egeland also noted that approvals for May had been much lower than expected meaning that much less aid had been delivered than in March and April. Egeland was optimistic that June would be better, noting that a land envoy had already reached Darayya for the first time since 2012.

However the delivery to Darayya has been criticised for being far too little, too late.

Egeland defended the delivery to Darayya, saying that there was misunderstanding about its purpose.

He said that the UN had “full hopes” that a second envoy with food for Darayya “will happen very soon”, adding that deliveries were also planned to other besieged areas including three other areas Zabadin, Arbin and Zamalka, where the UN hasn’t been yet.

There are currently 592,000 people in Syria in besieged areas including Al-Wae’r with a population of 75,000 people which the UN had only recently added to its list, said Egeland.

“(Al-Wae’r) is possibly the place with the worst nutritional situation of all the besieged areas,” he said, noting that although the UN had yet to deliver aid to Al-Wae’r, the Red Crescent had been able to “deliver something over the last 48 hours”.