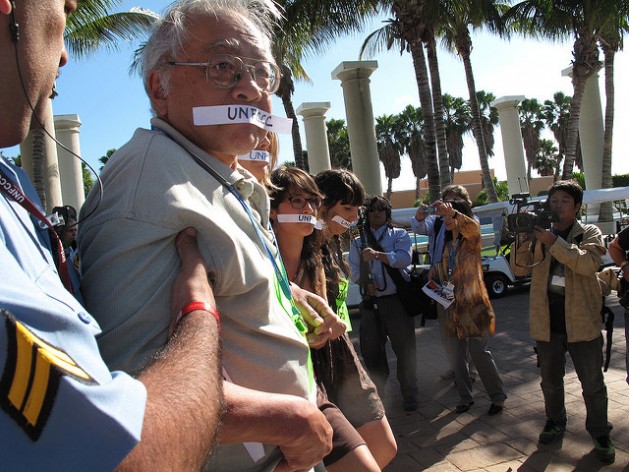 JOHANNESBURG, Aug 3 2016 (IPS) - With more and more governments narrowing space for dissent and activism, the UN has emerged as a key platform to air concerns about acute rights violations and develop protections for civil society and other vulnerable groups.

The core freedoms that enable civil society to conduct its work are under threat across the world. A report recently released by CIVICUS, the global civil society alliance, documented serious violations of the freedoms of association, expression and peaceful assembly in 109 countries. Individual activists and journalists are also increasingly being targeted to prevent them from exercising their legitimate rights and undertaking their vital work. In 2015, Global witness documented the killing of three environmental activists per week – while the Committee to Protect Journalists identified 199 journalists who were behind bars at the end of 2015.

Worryingly, restrictions on the exercise of civil society freedoms are being experienced in democracies as well as authoritarian states. In the US, Black Lives Matter demonstrators are facing serious challenges to their right to protest peacefully both from overzealous law enforcement agents as well as from divisive right wing politicians. In South Korea, security forces have violently repressed popular protests and judicially harassed civil society and union leaders advocating for greater transparency of the government’s ongoing investigation of the 2014 Sewol Ferry disaster. On July 4th, the President of the Korean Public Service and Transport Workers’ Union (KPTU), Han Sang-gyun, was sentenced to five years in prison for his role in organizing the protests.

Ethiopia’s totalitarian state apparatus has brutally suppressed grievances about access to land, adequate health services and education in the Oromia region, precipitating mass protests since November 2015. Over 400 protestors, including scores of children have been killed in one of the most egregious crackdowns on the right to protest in Sub-Saharan Africa in the 21st century. In Bahrain, the absolute monarchy continues to imprison human rights defenders, revoke the citizenship of outspoken critics and prevent activists from attending UN human rights conferences.

Due to the narrowing of political space in many countries around the world, there are fewer and fewer avenues available to individuals and groups to express their grievances at home. This makes the United Nations (UN) an important arena to highlight the importance of rights and to articulate international human rights standards.

The UN Human Rights Council, the UN’s preeminent human rights body, which recently concluded its 32nd Session in Geneva, took a number of critical steps to address restrictions on human rights and expand protections for civil society and other vulnerable groups. Notably, over the course of this three-week session, the UN decided to appoint the first-ever independent expert to monitor sexual orientation and gender identity rights, renewed the appointment of a similar expert to report on violations of the rights to freedom of assembly and association, and adopted a landmark resolution on the key principles necessary to protect and promote the work of civil society.

Last month at UN headquarters in New York, civil society, businesses and governments met to discuss the implementation and monitoring of the Sustainable Development Goals. The 17 universal goals provide an important platform for civil society to frame their government’s development and policies for the next 15 years and mitigates against many government’s reluctance to engage with civil society at the national level. The design of the goals has been lauded for its unprecedented levels of public participation and the recognition that civil society must be a co-partner in the delivery of international development agreements.

However, despite the admirable steps taken by the UN to address civic space restrictions and create a safe and enabling environment for NGOs to engage on important human rights issues, states are replicating repressive tactics to undermine the access and potency of civil society at the UN. The Committee to Protect Journalists, a civil society organisation mandated to document violations against press freedom, was recently granted consultative status with the UN’s Economic and Social Council, which allows NGOs to formally address UN bodies and processes, only after a decision to block them for the fourth year running was overturned. In another worrying attempt to suppress civil society participation at the UN, weeks earlier dozens of member states blocked over 20 LGBTI advocacy groups from attending the UN Global Aids Summit.

While the UN has emerged as an increasingly vital nexus to ensure that civic society grievances are considered, concerted efforts among the UN, States and civil society need to be made to ensure that decisions and norms the UN develops reach the most vulnerable and disadvantaged. The UN, and its allies in civil society, must work together to help demystify the work of the UN and ensure that countries across the world are domesticating and delivering on these important human rights initiatives.