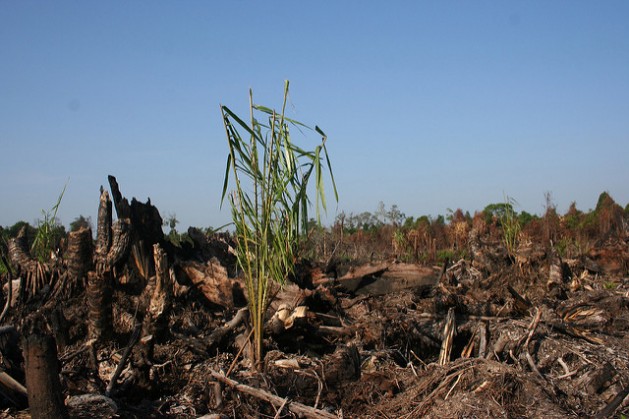 An oil palm seedling in a burned peat forest, Indonesia. Motions on the IUCN agenda include mitigating the impacts of oil palm expansion on biodiversity. Photo courtesy of Wetlands International.

HONOLULU, Hawaii, Sep 1 2016 (IPS) - U.S. President Barack Obama has stressed the urgency of tackling climate change in a speech to Pacific leaders in his home state of Hawaii.

“No nation, not even one as powerful as the U.S., is immune from a changing climate,” he told the Pacific Islands Conference of Leaders at the University of Hawaii’s East-West Center on Wednesday evening.

Debates and lobbying behind the scenes could be intense as governments and industries seek to protect their narrower interests from environmental pressure groups.

Obama said the sea was already “swallowing villages” in Alaska and glaciers were melting at an unprecedented pace.

Highlighting his administration’s efforts to combat climate change in its energy policies, the president added: “There is no conflict between a healthy economy and a healthy planet.”

The unusual threat posed to Hawaii this week by two approaching hurricanes underscored the president’s message as the island state also prepared to host the IUCN World Conservation Congress from Sep. 1 to 10. Over 8,300 delegates are expected to attend from more than 180 countries, including heads of state and government, U.N. agencies, NGOs and business leaders.

“Today, the U.S. is proud to host the IUCN Congress for the first time,” Obama said on Wednesday night.

His repeated warnings on climate change were ignored by the national media, however, with the networks firmly fixed on the race to elect his successor, focusing on statements made on immigration by Republican candidate Donald Trump in Mexico. Storm warnings just made the weather report.

The IUCN – International Union for Conservation of Nature – said Obama was not expected to attend Thursday’s opening ceremony in Honolulu.

Instead he was scheduled to visit Midway Atoll, making his first trip to the world’s largest marine sanctuary which he massively expanded by executive order last week. He then heads to China for G20 talks.

Obama more than quadrupled the size of the Papahanaumokuakea Marine National Monument to more than 582,000 square miles of land and sea in the Northwestern Hawaiian Islands.

The sanctuary was first established by former president George W. Bush, and IUCN organisers had hoped that their choice of Hawaii to host the World Conservation Congress, held every four years, would prompt Obama in his home state to seek to outdo his predecessor.

Their gamble paid off but the choice of remote Honolulu for the Congress has not been without controversy, with IUCN members expressing dismay at the message contained in the carbon footprint left by thousands of delegates jetting into the city over vast distances.

A small group of protesters also demanded that the U.S. remove its military bases from Hawaii.

The IUCN calls the Congress “the world’s largest and most inclusive environmental decision-making forum” which has the aim of defining the global path for nature conservation for years to come.

“The IUCN Congress will set the course for using nature-based solutions to help move millions out of poverty, creating a more sustainable economy and restoring a healthier relationship with our planet,” World Bank President Jim Yong Kim was quoted by IUCN as saying.

“We’re all in this together. It’s time to be bold. It’s time to take action. There’s no time to lose, so let’s make it count in Hawaii,” commented former Nigerian finance minister Ngozi Okonjo-Iweala.

Held under the theme of ‘Planet at the crossroads’, the Congress sets out to emphasise that nature conservation and human progress are not a zero-sum game. “Credible and accessible choices exist that can promote general welfare while supporting and enhancing our planet’s natural assets,” according to the IUCN, which is made up of 1,300 member organisations.

It says key issues to be discussed include wildlife trafficking, ocean conservation, nature-based solutions for climate change mitigation and adaptation, and private investment in conservation.

On Sep. 4 the Congress will also unveil the updated IUCN Red List of Threatened Species, said to be the most comprehensive information source on the global conservation status of flora and fauna. An Ocean Warming report is to be launched on Sept 5.

Two European delegates, who asked not to be named, said debates and lobbying behind the scenes could be intense as governments and industries sought to protect their narrower interests from environmental pressure groups.