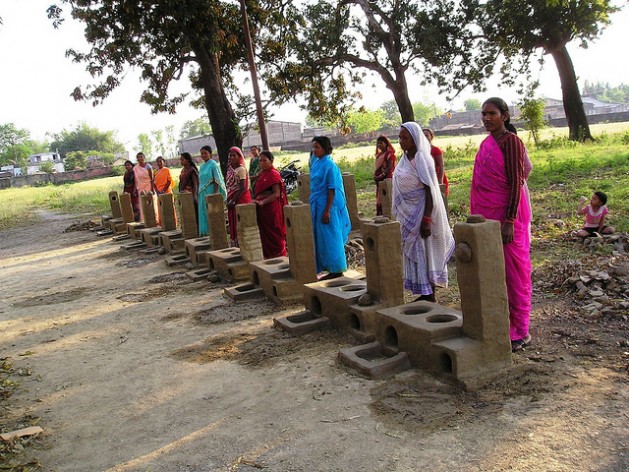 MARRAKESH, Nov 15 2016 (IPS) - The historic Paris Agreement on Climate Change last year is a breakthrough commitment to respect, promote and consider gender equality and women’s empowerment obligations while taking climate change action. It also committed to gender-responsive adaptation and capacity building. A year later, with the Agreement entered into force on 4 November, vigorous efforts are being made at COP 22 in Marrakech to make sure that gender equality is systematically integrated into all aspects of the implementation of the Agreement.

Both gender equality and climate change champions around the globe are meeting here in Marrakesh to transform the climate change agenda into one that recognizes the rights, priorities and capacities of women and girls and harnesses their talent and leadership for effective climate proofing and response.

Yesterday, on 14 November 2016, Parties adopted a decision on gender and climate change which extends the 2014 Lima Work Programme on Gender. The decision is far-reaching in that, for the first time, climate decision-makers supported the mainstreaming of a gender perspective in all areas of work of the Convention — mitigation, adaptation, finance, capacity-building, technology development and transfer, loss and damage. Now, it is incumbent upon Parties to register in their Nationally Determined Contributions (NDCs) and National Adaptation Plans (NAPs) commitments to promote gender equality and women’s empowerment.

The decision also strengthens efforts to promote the participation of women in the UNFCCC process, including in bodies established under the Convention. It enhances accountability by requesting regular reporting from constituted bodies and financial mechanisms such as the Green Climate Fund (GCF) and the Global Environment Facility (GEF) on how they are working to promote gender equality in their work.

The global agenda to reduce greenhouse gas emissions and arrest global warming is about more than just tackling climate change. Of the Sustainable Development Goals (SDGs),  SDG-13 “Take urgent action to combat climate change and its impacts” is closely linked to SDG-5 “Achieve gender equality and empower all women and girls”, recognizing gender equality both as a means and an end to effective climate action is a must. Moreover, the co-benefits of climate action and gender equality also positively and simultaneously address other SDGs – on poverty eradication, health, education, economic growth, sustainable energy, water and sanitation, full and productive employment and decent work, sustainable cities, just and peaceful societies, among others. For example, UN Women launched its Global Flagship Programme on Women’s Entrepreneurship for Sustainable Energy in partnership with the Government of India, the Department for International Development DFID of the UK and UNEP, which has a benefit multiplier effect. When linking efforts to achieve gender equality to climate action, we can effectively respond to the tragedy of climate change by helping to mitigate impacts and build resilient, inclusive societies. 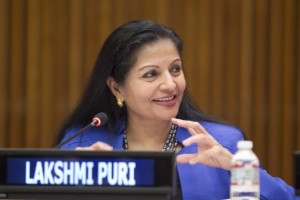 The impacts of climate change range from health threats, resources constraints, loss of livelihoods, displacement, forced migration and conflicts, energy, income and time poverty and food insecurity to reduced access to infrastructure and essential services. They all have disproportionate impacts on women and girls. Climate change impacts also exacerbate the existing inequalities, discrimination, heavy burden of care and domestic work and violence that women face in their daily lives. Following the 2010 earthquake in Haiti, for example, the inadequate sanitary facilities and lighting in the overcrowded camps contributed to the high instances of night attacks on women. The hardship and suffering for women and girls walking millions of miles for endless of hours to fetch water, fuel and food in Sub Saharan Africa and South Asia is unconscionable and has a high opportunity cost to them and to society and the economy.

Even without much support and validation, women have been on the front lines of adaptation and mitigation. They have been formidable climate change activists, working in families, communities and economies to fend off the effects of extreme weather events and build resilience. Women have pioneered inclusive and sustainable initiatives. The Solar Electric Light Fund (SELF) in Benin has been key in the fight against energy poverty while economically empowering women in their local communities.  It is an example of women led resilience building. Similarly, the leadership of CEO Ms. Wandee Khunchornyakong has allowed the Solar Power Company Group, Thailand’s largest solar power generation company, to successfully unlock private financing for photovoltaic capacity, provide clean energy jobs for women, and lead the country on a low-carbon growth path. Women are also demonstrating leadership in science, technology, and innovation, as well as developing and applying protective, resilient and adaptive technologies to deal with flooding, heat, water management and promoting local indigenous practices and traditional knowledge.

Yet, the consistent unequal participation of women and men in decision-making processes has meant rights and contributions of women are not adequately considered in disaster preparations and response plans, leading to further marginalization and greater risks. A 2015 study covering 881 environmental sector ministries from 193 countries found only 12 per cent of the ministers were women. Women account for only 20 to 25 per cent of the workforce in renewable energy. The low representation of women in positions of power and influence has been one of the factors for the slow progress in the formulation and implementation of gender-responsive climate policies and strategies. Gender-based discrimination in all its forms must be eliminated with the utmost urgency.

The successful implementation of the actions under the extended work programme will require significantly increased targeted resources. Although the GCF has promoted a gender-sensitive approach from the outset, the existing resources to finance climate actions rarely ensure access to climate finance for programmes that are led by or have women as beneficiaries. This must change and both GEF and GCF must provide transformative and significantly scaled up financing for specific programs that aim at gender and climate justice together.

UN Women has been working with Parties and other stakeholders to strengthen understanding and the systematic integration of a gender perspective in climate policies and actions. In doing so, it is crucial for Parties to set concrete goals and targets in order to ensure the full, equal and effective participation of women in climate policy making and programme implementation at national, regional and global levels.

A paradigm shift is happening. This represents an unprecedented opportunity to leverage the co-benefits between gender equality and climate action, putting gender equality considerations and the voice and agency of women and girls at the centre of all climate management efforts and investments. We will thereby leave no one behind and do justice to people, planet and the objectives of the 2030 Agenda for Sustainable Development.