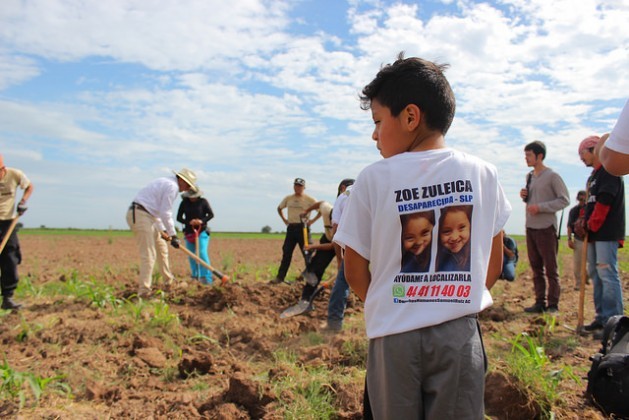 Eight-year-old Juan de Dios Torres, whose five-year-old sister Zoe Zuleica Torres went missing in December 2016 on the outskirts of the northeastern city of San Luis Potosí, participates along with his mother in the brigade searching for the remains of missing people in the northwestern state of Sinaloa. Credit: Marcos Vizcarra/IPS

NAVOLATO, Mexico, Feb 1 2017 (IPS) - Juan de Dios is eight years old and is looking for his younger sister, Zoe Zuleica Torres Gómez, who went missing in December 2015, when she was only five years old, in the northeastern state of San Luis Potosí. He is the youngest searcher for clandestine graves in Mexico.

With pick and shovel, in the last week of January he joined the Third National Brigade for the Search for Disappeared Persons, which on Monday Jan. 30 found the remains of a body in a grave hidden in a corn and sorghum field on the communal land in Potrero de Sataya, in the municipality of Navolato, in the northwestern state of Sinaloa.

It is the second body found by this brigade, made up of a handful of women and men who search in the ground for signs of their children, siblings and parents gone missing during the years of the so-called war against drug trafficking, together with human right defenders and Catholic priests.

“A problem that has not been recognised cannot be solved, nor can it heal,” said Juan Carlos Trujillo Herrera, who is behind the creation of the brigades, told IPS during the brigade’s work in Sinaloa.

“All the public prosecutor offices in the country are saturated with this issue, there is no structure in place that would allow us to think that the institutions are going to work. That is why we have had to go out to look ourselves for our family members,” insisted Trujillo, who is searching for four disappeared siblings.

On taking office in December 2006, right-wing president Felipe Calderón (2006-2012) militarised the security of the country to combat the drug mafias and threw Mexico into a spiral of violence from which it has not escaped.
One aspect reflects the seriousness of the problem: before that year, the Mexican government identified seven major drug cartels. Ten years later, there are nearly 200 organised crime groups operating in the country, according to information published this month by the Drug Policy Programme of the Centre for Economic Research and Teaching (Cide).

The data from Cide, one of the country’s most prestigious educational institutions, also registers at least 68 massacres in that period of time.

In 10 years, the so-called war on drugs launched by Calderón has left more than 177,000 murder victims, 73,500 of them during the administration of his successor, the also conservative Enrique Peña Nieto.

It has also left at least 30,000 missing people, although registers on disappearances vary greatly among the different authorities and civil society organisations.

In 2011, the Movement for Peace with Justice and Dignity headed by the poet Javier Sicilia brought to the forefront the issue of forced disappearance, reporting hundreds of cases in this country of 122 million people.

But it was in October 2014, with the forced disappearance of 43 rural student teachers in Ayotzinapa, in the southwestern state of Guerrero, and in January 2016, when five young people were detained and “disappeared” by state police in Tierra Blanca, in the state of Veracruz, that the country discovered that many of the disappearances attributed to organised crime were actually carried out by the authorities.

“That is why they did not look for them,” said Miguel Trujillo, Juan Carlos´ younger brother.

Since then, groups of family members who, desperate because of the absence of the state, started their own searches, have mushroomed around the country.

To do this, they train: they take courses in forensic anthropology, archeology, law; and they gear up: they buy caving equipment, they get trays to find small bones; they form crews and have become experts in identifying graves and bones.

The first brigades were organised in March 2016 in Veracruz, a state in eastern Mexico where several clandestine graveyards have been discovered, where the remains of160 people have been found so far.

There are now at least 13 brigades in the country. And since Jan. 24, different groups have gone out into the field in Tamaulipas, Veracruz and Sinaloa, where people belonging to brigades from five states arrived for a 12-day collective search.

The groups are supported by civil society organisations, such as the Marabunta Peace brigade, a group of young people from Mexico City who provide security for the families.

“It is very hard for young people to deal with these realities, for them to not get disillusioned with humanity, but escorting the groups gives them hope. Because when they realize that they are able to help, they find hope and they reaffirm themselves as builders of peace,” Miguel Barrera, the head of Marabunta, told IPS.

Sinaloa is the land of the cartel created by the powerful drug lord Joaquín “el Chapo” Guzmán, who was extradited to the United States on Jan. 19.

The brigade has made two findings: the one in Potrero Sataya and another in the municipality El Quelite, 10 km from port Mazatlán. The little boy from San Luis Potosí came with his mother, to help search for human remains.

“This is something we have to do because the government is not doing it and it was never going to,” said Mario Vergara, who founded the group The Other Disappeared from Iguala, the municipality where the students from Ayotzinapa disappeared, and now helps brigades all over the country.

“We are making progress in terms of organisation and we are going to continue. The people that remain in each state are going to learn how to coordinate to carry out better searches; we need to replicate the model in each state and engage the governments to help the search groups,” said Miguel Trujillo.