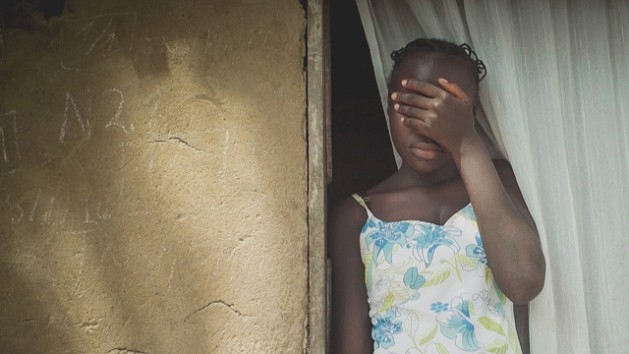 Shocking new revelations about what happened to children sexually abused in the Central African Republic by peacekeepers were revealed in a Code Blue Campaign press conference April 12. Credit: SVT

UNITED NATIONS, Apr 14 2017 (IPS) - Several survivors who were sexually abused by peacekeeping forces in the Central African Republic (CAR) continue to be neglected by the UN, an investigative team has found.

Three years after cases of sexual abuse and exploitation by peacekeeping forces in CAR became public, a Swedish film team located a number of survivors who have said that the UN’s children agency (UNICEF) promised support never arrived.

“The exposure isn’t that these atrocities were committed against the kids, but that they were then promised support and just vanished,” Co-Director of AIDS-Free World and its Code Blue Campaign Paula Donovan told IPS.

The organization first documented the cases of sexual abuse by French peacekeeping troops in 2015, causing public outrage. Children between the ages of 8 and 15, who were living in a refugee camp at the time, reported that they were forced to perform sexual acts in exchange for food and other goods. Fourteen French soldiers reportedly were suspected of being involved.

After speaking to UNICEF representative in CAR who said that the children are cared for and followed up with, investigative reporter Karin Mattisson and her team spoke to children who said otherwise. One such survivor is Martha who became pregnant and contracted HIV by a peacekeeping soldier when she was 14-years-old.

“Initially, UNICEF said that they would make sure that the soldier was imprisoned and take care of the mother and baby to help us. But then, nothing, no one came to visit. It was left to us to take care of the child,” her friend said. Martha said that all they received was a “present” of money equivalent to US$15, a bag of rice, milk and sugar. Meanwhile, the peacekeeper was sent home and it is uncertain if any punitive action was taken.

Two boys, who were also sexually abused and provided testimony to the UN’s initial investigation, similarly claimed that they did not receive any help. “We are trying to get it together on our own. We pick up water for people, we wash cars—that is how we have lived since then.”

In response to the allegations, UNICEF spokesperson Najwa Mekki told IPS that the agency has provided assistance to children whose cases they are aware of and that they have scaled up their reporting procedures, victim assistance, and staff capacity since 2015.

“We are following up on the children identified in the Swedish TV programme, providing assistance when appropriate, and will continue to give the necessary support to any victim of sexual exploitation and abuse who comes forward or is brought to our attention,” she told IPS.

Former Under-Secretary General and High Representative of the UN Ambassador Anwarul Chowdhury, who is also involved in the Code Blue Campaign, noted that UN bureaucracy often stands in the way of action by preventing clear and concise information on such cases to travel up the chain of command.

“Finally when it reaches the Secretary General, [information] is already absolutely diluted,” he told IPS. And without complete evidence, any investigation becomes a “sham inquiry,” Chowdhury added.

Despite steps taken by the UN to address the scandal in 2015, including the creation of a review panel which characterized the UN’s response to sexual exploitation and abuse as a “gross institutional failure,” little to no punitive action has been taken.

Most recently in January, a French investigation into the cases closed without anyone being charged. Senior UN officials accused of abuse of authority for suppressing information rather than reporting cases have also remained largely untouched, Donovan said, adding that the initial “gross institutional failure” has only continued.

“Justice is being delayed and it is being denied,” Chowdhury told IPS.

Donovan also pointed to the problematic use of “UN insiders” in addressing the issue due to concerns of their own legacy and reputation.

“The people who are part of the problem have been tasked with the solution…they don’t want to come forward and say ‘here’s what is so broken and so awful about the UN and I’ve decided to fix it’ because they presided over all of it,” she told IPS.

Chowdhury said that no task force will help.

“If it is with UN insiders…they will not do anything to put their own into this abuse,” he told IPS.

Both Donovan and Chowdhury called for a special courts mechanism to deal with sexual abuse by UN peacekeeping forces. Chowdhury also highlighted the need for a independent unit to conduct inquiries and report cases which may help bring about more punitive action against perpetrators whose actions are often shielded by their colleagues.

“The UN needs to save itself from itself,” Donovan told IPS.