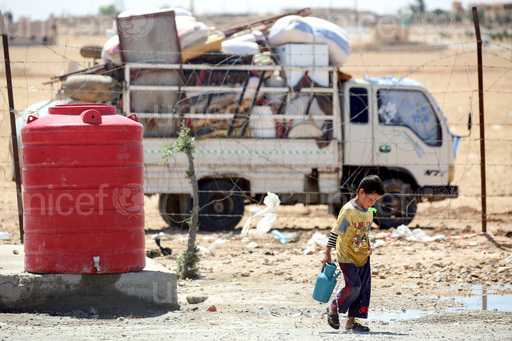 On 3 June 2017 in the makeshift camp at Ain Issa, 50 km north of the Raqqa in the Syrian Arab Republic, a boy carries a jerrycan filled with water. More than 6,000 people live in harsh conditions and the numbers continue to rise as violence escalates in the area. Credit: UNICEF/UN067440/Souleiman

UNITED NATIONS, Jun 29 2017 (IPS) - As US-backed Syrian rebels plow ahead in the fight to take back Raqqa from the Islamic State in Iraq and the Levant (ISIL) in Syria, the stake of civilian lives, who number as many as 100,000 in the city, has raised concerns among top UN officials.

According to the UN Human Rights Office, at least 173 civilians have been killed by air and ground strikes since June 1. Even though the estimated numbers provide the international community with a sense of the killings, the actual numbers are likely much higher.

“The intense bombardment of Al-Raqqa over the past three weeks has reportedly left civilians terrified and confused about where they can seek refuge as they are caught between ISIL’s monstrosities and the fierce battle to defeat it,” said Zeid Ra’ad Al Hussein, the UN High Commissioner for Human Rights on Wednesday.

Reports of civilian casualties continue to stream out of the region as escape routes are strategically choked off. Hospitals and schools have also been allegedly attacked. In fact, modern urban tactics of warfare, such as the use of humans shield in densely populated areas, has wreaked havoc in the region.

“The large number of civilian casualties indicates that much more needs to be done by the parties to ensure protection of the civilian population,” Zeid stressed.

Fleeing civilians face the risks of landmines and getting caught in the crossfire. Those who have managed to escape have had to pay hefty sums of money, sometimes to smugglers affiliated with ISIL.

There are also allegations that the US-backed Syrian Democratic Forces (SDF) have looted homes and abducted children to join the fight against ISIL in cities where they enjoy control, like Tabqa.

US Secretary of Defense Jim Mattis said Tuesday that Washington may continue to supply Syrian Kurdish fighters with weapons even after the ISIL is ousted from its de facto capital Raqqa.

Zeid has called on all parties in the war to review their tactics to minimize loss of civilian lives, and commit fully to international law.