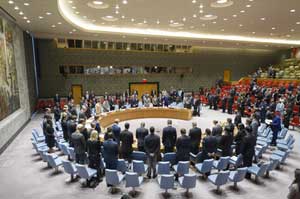 The Security Council observes a moment of silence in memory of two UN experts who were killed recently while monitoring the sanctions regime in the Kasaï Central region of the Democratic Republic of the Congo (DRC). Credit: UN Photo

Central Kasai has been mired in a conflict between government forces and local militias called Kamuina Nsapu since August 2016. The conflict, which has escalated in recent months, garnered international attention when two U.N. experts in the region were killed in March 2017.

The conflict intensified in the run up to the elections of December 2016, when government security forces clashed with demonstrators who contested the president’s bid to stay in power beyond his term ending in 2016, and killed 50 people. Hundreds were jailed, and media outlets were banned.

Ever since, the situation has only become worse.

Newer armed groups like Bana Mura have emerged to fight the Congolese army and police. They have carried out brutal attacks against targeted civilians of Luba and Lulua ethnic groups, killing hundreds and burning villages. Small children have been gravely wounded from machete attacks, and pregnant women have been cut open.

Victims have speculated that members of the Congolese army have also been part of these horrific killings.

Today, as many as 3,300 people have died, and 1.3 million people have been displaced within the country. In Angola alone, more than 30,000 people have been registered as refugees as thousands more stream into the central African country every day. Some 42 mass graves have been documented by the Joint Human Rights Office.

The atrocities committed against civilians have put pressure on the UN, which adopted the UN Human Rights Council resolution on June 22, 2017.

In the resolution, the Council expressed its grave concerns about the recurrent violence and the “recruitment and use of child soldiers, sexual and gender-based violence, destruction of houses, schools, places of worship, and State infrastructure by local militias, as well as of mass graves.”

The team includes Bacre Ndiaye, a Senegal national, Luc Côté, a Canadian who has worked on human rights violations in the DRC, and Mauritania’s Fatimata M’Baye.

A comprehensive report with the findings will be presented in June 2018, at the 38th session of the Human Rights Council.