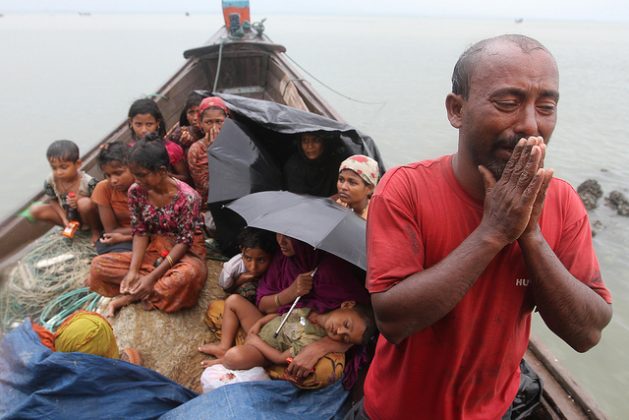 UNITED NATIONS, Sep 1 2017 (IPS) - A surge in deadly violence in Myanmar has forced over 18,000 Rohingya Muslims to flee in less than one week, a migration agency said.

Security forces have since reportedly burned villages and conducted attacks on Rohingya Muslims.

According to the International Organization for Migration (IOM), an estimated 18,500 have since crossed into Bangladesh from Myanmar’s Rakhine state and thousands more are trapped in the no-man’s land in between the two countries.

Some have reportedly fled by crossing the bordering Nauf river where Bangladeshi border guards have already pulled out the bodies of up to 20 Rohingya Muslims.

“I utterly condemn the violent attacks on security personnel, which have led to the loss of many lives and the displacement of thousands of people,” said UN High Commissioner for Human Rights Zeid Ra’ad al-Hussein, but highlighted the need for government forces to employ a proportionate response.

“Unfortunately, what we feared appears to be occurring. Decades of persistent and systematic human rights violations, including the very violent security responses to the attacks since October 2016, have almost certainly contributed to the nurturing of violent extremism, with everyone ultimately losing,” he continued.

The Office of the High Commissioner for Human Rights (OHCHR) said that attacks against Rohingya civilians during those operations may “very likely” amount to crimes against humanity.

Myanmar authorities however have repeatedly denied the allegations.

The government has long disputed the Rohingya people’s status as Burmese citizens and has restricted their movement and excluded them from social services, rendering the majority of the group stateless and impoverished.

Chairman of the Geneva Centre for Human Rights Dr. Hanif Hassan Ali Al Qassim urged the government to prevent human rights violations from being inflicted on the civilian population in the current escalation of military conflict.

“The disturbing testimonies of the Rohingyans fleeing Myanmar confirm that serious human rights violations are being carried out against the civilian population. The world society cannot turn a blind eye to the disturbing situation in Myanmar. The Geneva Centre appeals for an immediate end to the persecution of the Rohingyans,” Al Qassim added.

In response to the violence, the UN Security Council held a closed door discussion.

Though no formal statement was made, British Ambassador Matthew Rycroft called on all parties to de-escalate and to look to the long-term during a press conference.

“We look to her to set the right tone and to find the compromises and the de-escalation necessary in order to resolve the conflict for the good of all the people in Burma,” he said.

Fresh violence erupted just two days after a long-awaited report investigating the situation in Rakhine State by the Advisory Commission on Rakhine State.

“Tensions remain high and they risk becoming worse. Violence will not bring lasting solutions to the acute problems that afflict Rakhine State,” said Chair of the Commission Kofi Annan.

Among the recommendations in the 63-page report is for Myanmar’s government to revisit its citizenship law, grant freedom of movement for Rohingya Muslims, and invest in the socio-economic development of Rakhine.

Annan warned that failure to implement its recommendations will only lead to another cycle of violence and radicalization which will further deepen chronic poverty in the state.

Zeid similarly called on the Myanmar Government to follow the recommendations in order to “address rather than sacrifice human rights concerns in the interests of maintaining peace and order.”

Calling for and Criticizing International Support

The South Asian nation has already been hosting an estimated 500,000 Rohingya Muslims for over three decades.

Swing appealed to Bangladesh to either admit people fleeing violence, many of whom are women, children, and the elderly, or facilitate better access for humanitarian aid to reach them.

He also called on Myanmar authorities in Rakhine State to facilitate the work of humanitarian agencies and provide unfettered humanitarian access to help stabilize the situation and reduce the number of people trying to flee the country.

However, the office of Aung San Suu Kyi has accused international organizations of helping “terrorists,” prompting fears for the safety of aid workers and continued violence.

“I am extremely concerned that the unsupported allegations against international aid organizations place their staff in danger and may make it impossible for them to deliver essential aid,” Zeid said.

“Such statements are irresponsible and only serve to increase fears and the potential for further violence,” he continued.