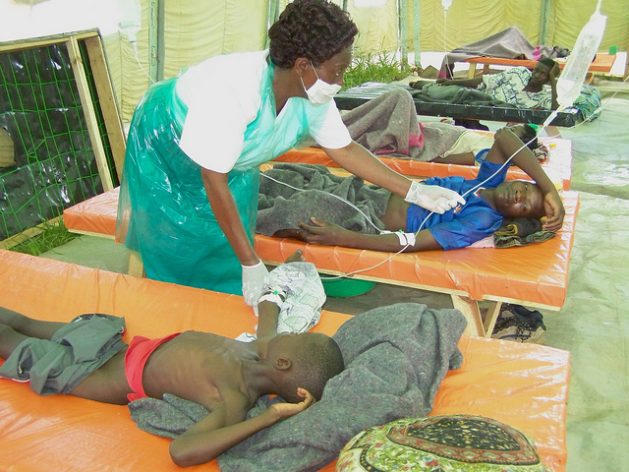 NEW YORK, Sep 6 2017 (IPS) - A recent cholera outbreak in North-Eastern Nigeria has resulted in at least 186 suspected cases and 14 deaths as of Sep. 1, according to Borno State’s Ministry of Health.

The outbreak, which coincided with this year’s annual World Water Week, occurred in Muna Garage, a camp sheltering an estimated 44,000 internally displaced persons (IDPs) on the outskirts of Maiduguri, the capital city of Borno state, according to the World Health Organization (WHO).

A rapid response to the outbreak by Borno State’s Ministry of Health, along with WHO and other humanitarian partners, is underway.

Cholera outbreaks are endemic in North-Eastern Nigeria. According to an overview in the Pan-African Medical Journal, such endemic outbreaks are prone to occur in conflict-affected areas where civil unrest has disrupted public sanitation services.

Borno State is one of Boko Haram’s strongholds.

Boko Haram terrorists have damaged or destroyed 75 percent of the water and sanitation infrastructure in North-Eastern Nigeria, leaving about 3.6 million people without the most basic water services, according to the United Nations Children’s Fund (UNICEF).

Most Northern states in Nigeria rely on hand dug wells and contaminated ponds as sources of drinking water. A cholera outbreak occurs when untreated diarrhea from cholera patients gets into the water supplies, according to the Pan-African Medical Journal overview.

“When children have no safe water to drink, and when health systems are left in ruins, malnutrition and potentially fatal diseases like cholera will inevitably follow,” said UNICEF’s Global Chief of Water, Sanitation and Hygiene, Sanjay Wijesekera, on Aug. 30.

The best preventive measures against cholera include basic hygiene and sanitation practices as well as access to clean water, according to WHO’s assessment. This ties in with the sixth United Nations Sustainable Development Goal (SDG) to “ensure water and sanitation for all” by 2030.

Steps towards achieving this goal involve ‘not just keeping up with cases’ but also implementing programs to ‘prevent further spread and early detection of cholera’, according to WHO.

Significantly, cholera outbreaks in North-Eastern Nigeria have occurred prior to the dawn of Boko Haram in 2002.