Tanja Gohlert is Member, European Secretariat of the Global Call to Action Against Poverty

To mark the anniversary, thousands of people participated in over 850 events across 110 countries to raise awareness for the goals and to hold governments accountable for their slow rollout of national implementation programs. 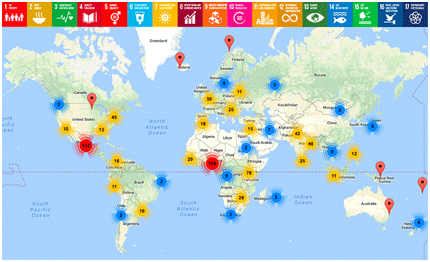 Map: Over 850 events across 110+ countries, led by Global Call for Action against Poverty, Action for Sustainable Development, the UN´s SDG Action Campaign and in conjunction with CIVICUS´SPEAK! Campaign.

“The goals will only be implemented if people demand action by their governments” said Beckie Malay from the Global Call to Action Against Poverty (GCAP), who organised an event with university students in Manila, Philippines

Community events were held all shapes and sizes, with marches, panel discussions, art performances, lesson plans and an #Act4SDGs social media conversation that reached over 80 million people. Central to these actions, was the recognition that the most marginalised groups of people require priority access to the resources and programs being mobilised by the goals.

“Today we should be celebrating, but the situation is worrying. Social injustices are increasing and people are going hungry again” commented Salina Sanou of Action for Sustainable Development in Kenya. Last week, the UN Food and Agriculture Organisation (FAO) announced that despite a steady decline in recent years, 815 million people suffered from hunger in 2016 – 38 million more than 2015. This is unacceptable in these times of over-production and over-consumption in rich countries, says Sanou. “It is time to break the cycle of inequality in all our systems.”

Standing in front of a large pink elephant in front of the EU’s headquarters in Brussels, Ingo Ritz, coordinator of the Global Day of Action, pointed out that the European Commission was very supportive when the Agenda 2030 was negotiated. “However, now the EU leadership is not seriously interested and the SDGs have become the elephant in the room. They cannot afford to ignore them – making Europe sustainable for all will be key for the legitimacy of the EU.” 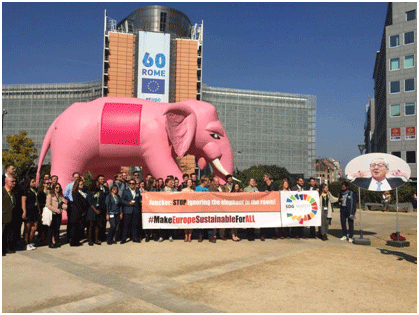 The elephant in the room for governments: The Sustainable Development Goals

46 events were organised in India alone. Young people, women, Dalits, urban poor and religious minorities, gathered at various landmarks with banners and placards highlighting which SDGs would have an impact on their lives. The goals have not reached these communities, the main concerns continue to be basic – education, housing issues, health issues, as well as water and sanitation, noted Manshi Singh of the national network Wada Na Todo Abhiyan (WNTA). 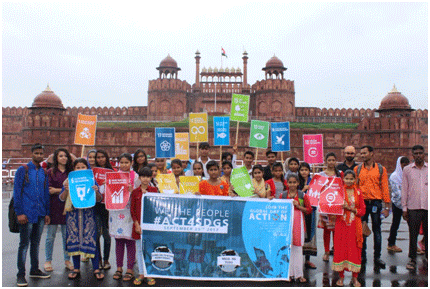 In Buenos Aires, banners highlighting the SDGs were hung on main streets in all 15 communes of the city and murga dancers and jugglers shared information on the SDGs. Agustina Carpio, from the Argentinian NGO FOCO, said the idea is to have an impact on each and every citizen. “We need everybody to be aware of what the SDGs mean and understand that we have a humanitarian commitment ahead of us and not an act of propaganda.”

Note: More information as well as photos and stories from all over the world can be found at act4sdgs.org