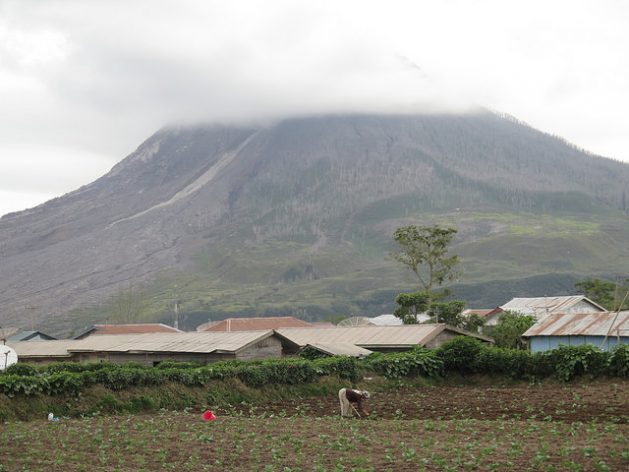 A woman works in her vegetable patch at the foot of Mount Sinabung, North Sumatra, Indonesia. Credit: Kafil Yamin/IPS

No one knows when the eruptions will cease. Some displaced people have formed new settlements; others live in temporary houses or refugee camps.

With support from BNPB, the Indonesian acronym for the National Agency for Disaster Management, the local government has resettled 347 families in three housing complexes in Siosar area, Karo regency, with each family getting a 500 square meter plot for farming. They grow vegetables, breed animals, and operate shops and services. Social, cultural and economic life have blossomed.

Since 2015, following a major eruption, Siosar farmers have sent their harvest to Kabanjahe, the capital of Karo Regency. Potatoes, carrots, cabbages, oranges and coffee beans are on the market, helping stimulate economic growth of 4.5 percent of the North Sumatra province.

But the 2016 eruption devastated the staggering economy. At least 53,000 hectares of farmland was destroyed by volcanic ash and mud. The harvest failed throughout the entire district. Of 17 sub-districts, 14 were severely affected. The head of the local Agriculture Office, Munarta Ginting, urged the farmers to shift to tubers, which were more resilient to volcanic ash.

The farmers refused to give up. They started all over again late last year. BNPB sent seeds, fertilizers and consultants to help.

“After emergency management measures come social and economic recovery measures, which look farther ahead but are no less challenging,” said Agus Wibowo, director of the Social-Economic Division of BNPB.

“We aid victims to overcome the calamity, start a better life, restore social and economic enterprises, and more importantly, restore confidence for the future,” Agus added.

In the first week of October, life in Siosar has returned to normal, with farmers harvesting potatoes, cabbages, carrots and chilies, despite lower production due to lack of rainfall.

Several farmers have enjoyed large harvests. Berdi Sembiring grew nine tons of potatoes on his 500 meter square farm, which is good for the dry season.

BNPB also encourages the refugees not to rely solely on farming and raw products. “We encourage people to develop new business opportunities, such as food industry, mechanics and manufacturing,” said Agus Wibowo, who sent a team of business consultants to train the wives of farmers.

“One of the shortcomings is the unstable rate of production. Four groups of farmer wives take turns using one processing machine. Each group has its own production capacity,” said Nurjanahah, a business consultant for the potato chip manufacturing.

“Uncompetitive quality and big diminution from raw potatoes to final potato chip is another challenge to deal with. Four kilograms of potatoes produce only 600 grams of chips,” she added.

“The potato chip has yet to be a professional product until we solve all these shortcomings,” Nurjanah told IPS.

BNPB provided four processing machines for groups of farmer wives in Siosar, beyond the Rp590 billion fund it created for the Mount Sinabung disaster, according to Sutopo Purwo Nugroho, head of BNPB’s Center of Data and Information.

Basic mechanics is another alternative to diversify from agriculture. For one thing, the sector has yet to have competitors in the new settlements. For another, the area is in urgent need of such services, considering the absence of public transportation. Personal minivans and motorcycles are the backbone of village transportation.

Basmadi Kapri Peranginangin returned to his village after living for a year in a refugee camp. He grew potatoes and other vegetables, but just as he finished planting, Mount Sinabung erupted again and his newly-replanted farm – part of the area’s most vulnerable ‘red zone’ – was ruined.

Peranginangin decided to go to Siosar and shift to the motorcycle repair business, but lacked the funds to buy tools and build a workshop. Then he heard about a training program for displaced people jointly sponsored by the International Labor Organisation (ILO), the Food and Agriculture Organization of the United Nations (FAO), the UN Development Program and BNPB.

After one month of training, he received a set of equipment to repair motorcycles. And with his new knowledge, including administration and financial management, he started a motorcycle repair business in July 2016. Now he earns Rp3,5 million a month on average.

When social and economic life blooms, so does art and culture. On October 1, the new community celebrated its one-year anniversary with an art and music show.

Biri Pelawi, a local religious leader, said in his opening remarks, “Siosar land is God’s promised land for us. Sigarang-garang, our former village, is the departing spot. One year in refugee camps is our training period. God’s plan for us is here. He kept His plan secretly.”

“Now we live safe with no fear of Mount Sinabung eruption. God has sent us to safer place to carry on,” he said.

On that very day, Mount Siabung erupted again, spewing volcanic ash as high as four kilometers, but this time, no one was affected and the celebration continued as planned.

“We don’t have to worry anymore. We live in a safe place,” said Mesti Ginting, one of the celebration organizers.