State employees in Turkey have been forced to participate in a restriction of their own freedom of thought and expression. State authorities, as employers, have demanded that their employees report their own and their whole family's passwords to all of their social media accounts. Holding back information could lead to imprisonment.

Nov 20 2017 (IPS) - ”The present government has taken measures that go beyond anything the previous military juntas did”, according to legal expert Sercan Aran of the trade union confederation KESK. The army has previously registered personal data and the private political opinions of suspected dissidents, but always under secrecy.

Now there is a form to be filled in: ”Personal details on employees”. The 22 000 employees of the State Hydraulic Works (DSI), which is the state agency responsible for national water resources,  are required to share details that include their newspaper subscribtions, which unions and associations they are or have been members of, which bank accounts they have, and which NGOs and charity trusts they contribute to.

Further questions are directed at social media use. Yet not only on their own use, but also of their family members, such as husband/wife and children. Even their passwords are demanded. 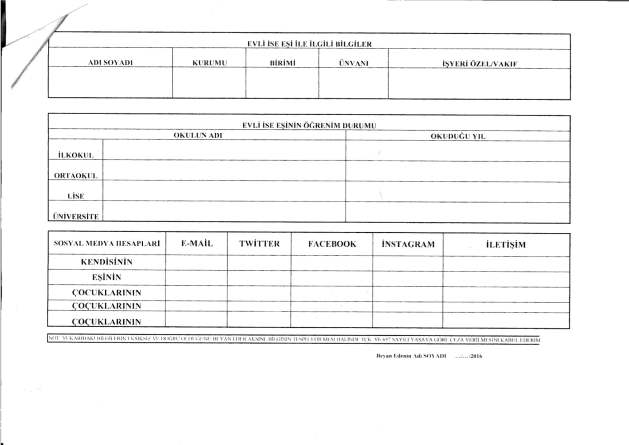 This paper shows how employees are forced to write down their passwords to their accounts in social media and to their emails. They also have to fill out their family members passwords. Foto: Private

The form ends with a threat against false testimony and the sentences: ”I hereby attest that the above information is accurate and complete. If this proves false, I accept the penalty imposed by the  law regulating public employment and in accordance with the Penal Code”.

According to Sercan Aran at the Confederation of Public Employees’ Trade Unions (KESK), state employees at a large number of workplaces have been required to fill in that form, even though their unions advise against compliance.

”If you refuse, the least that may happen is that you lose your job.”

In normal circumstances, the regime would refer legal challenges to the emergency measures and the so called ‘decrees’, which have replaced labor market regulations since the failed coup attempt last summer. But this ongoing recording of private opinions and expressions of public sector employees and their families completely falls outside lawful regulation.

”The registration of personal details, as well union membership and political allegiance is in conflict with the constitution”, Sercan Aran adds. ”This registration is also in breach of a number of international conventions Turkey has signed.”

Together with colleagues at another of the trade union confederations in Turkey, DISK, Sercan Aran is looking into the possibility of suing the government. The registration of opinions may be possible to bring to a national or international court, although a potential problem is that members who seek a hearing in court may risk losing their jobs.

Another problem is that the Constitutional Court, the highest court in Turkey, has rejected hearing any cases that involve the present state of emergency.

Mustafa Senoglu is the chairman of ESM, an industrial sector union which has 1000 members working at the DSI water agency. According to ESM, the focus on registration of views is the key reason that a large portion of the 150 000 employees in the country have lost their jobs since the attempted coup in June last year. The same is said about the 50 000 dissidents that have been jailed in this period.

”I am afraid we are on the same path towards a disaster as Germany experienced during the 1930s. Just as the Germans did, we have a government that is in power through the popular vote but one that uses democratic powers to demolish democracy and replace it with a fascist dictatorship.”

Mustafa Senoglu adds that the union has encouraged members to refuse to fill in the form as the questions are in breach of the existing laws that protect the freedoms of expression and association.

”But unfortunately our members do not listen to us, which we can understand, as it might cost them their jobs”

The DISK confederation also has advised their members only to answer the necessary questions, and to leave the remainder empty. But the DISK members too have chosen to comply with their employer’s demand.

”Through the registration of opinions the government is trying to gain complete control over the labour movement”, says Süleyman Keskin, Secretary General of the workers’ union Enerji-Sen.

President Erdogan’s vision of a ”New Turkey” is a vision without opposition, and the recording of people’s private opinions is part of it.

The recent UN/ILO regional conference, held in Istabul, was boycotted by both DISK and Enerji-Sen, as they felt the UN and EU should put more pressure on the Turkish government. If not, there will soon not be any independent trade unions in Turkey.

Turkey and the European Union have been in membership negotiations since 2005. Talks though have been slow and in recent years, they have come to a full stop due to Turkey’s horrific record in quelling freedoms of expression and association.

The European Parliament and several member countries have called for the membership negotiations to stop, but the largest human rights organisation in Turkey (IHD), say that a halt is a bad idea, as an end to negotiation will not aid opposition to the government.

”That would mean punishing the other half of Turkish citizens that didn’t vote for Recep Tayyip Erdogan and that really do want to be a part of the European Union” says vice-chairman Raci Bilici.

Arbetet Global has tried to reach Veysel Eroglu the Minister of Forestry and Water, Murat Acu the General Director of the State Hydraulic Works (DSI), and Ayhan Demiroglu who is chief of staff at DSI. None of them has been willing to answer questions about the registration of private opinions.