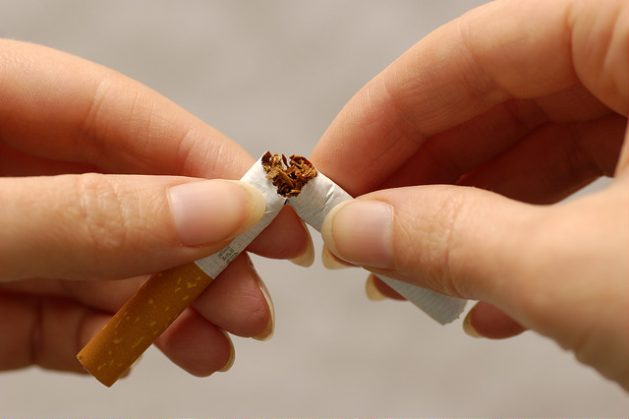 Close-up of a woman hands hold and broke a cigarette. Credit: Bigstock

UNITED NATIONS, Nov 21 2017 (IPS) - Back in November 2008, the 193-member General Assembly decided, by consensus, to ban smoking and tobacco sales at the UN headquarters in New York: a ruling observed by all affiliated agencies worldwide, including the Geneva-based World Health Organization (WHO) which has severed links with the tobacco industry.

But there still remains one holdout: the 187-member International Labour Organization (ILO) in Geneva whose Governing Body, which meets three times a year, has postponed once again its decision on whether or not to cut ILO’s ties with the tobacco industry.

The executive body’s deliberations remained deadlocked at a meeting in early November resulting in a second postponement of a decision to sever ties with an industry, whose products are responsible for killing some seven million people per year from lung cancer and heart disease.

Mark Hurley, International Director of Tobacco Industry Campaigns, told IPS it is disappointing that ILO has postponed a decision on whether to end its relationship with tobacco companies.

The Campaign for Tobacco-Free Kids, he said, strongly urges the ILO to cut ties with tobacco companies and prohibit all members of the tobacco industry from participation in the ILO when the decision is revisited in March 2018 at the 332nd Session of the Governing Body in Geneva.

He said tobacco companies that spread death and disease across the globe should have no place in a UN agency like the ILO, or any responsible organization. Tobacco products are uniquely lethal and kill up to half of lifetime users.

Around the world, he pointed out, tobacco companies remain the greatest obstacle to reducing the more than 7 million deaths their products cause each year. Tobacco companies like Philip Morris International and British American Tobacco fight efforts to reduce tobacco use, aggressively market cigarettes to young people and other vulnerable populations, and deceive the public about the health risks of tobacco use.

Hurley said tobacco companies use membership in respected organizations like the ILO to portray themselves as responsible corporate citizens and divert attention from their role in causing a global tobacco epidemic that is projected to kill one billion people worldwide this century.

“The ILO should not be part of these efforts,” he declared.

The Bangkok-based Southeast Asia Tobacco Control Alliance (SEATCA) said it was disappointed that the ILO has postponed its decision on whether to cut its ties with the tobacco industry. “This is a second postponement by the Governing Body and yet another delay in ending an unhealthy relationship,” the Alliance said in a statement released last week.

The ILO is the only remaining UN agency that continues to maintain ties with the tobacco industry. Over the past several years, the ILO has received about $15 million from Japan Tobacco International (JTI) and Eliminating Child Labor in Tobacco Growing Foundation (ECLT), an NGO also funded by the transnational tobacco industry, SEATCA said.

She pointed out that the tobacco companies’ sponsorship money goes to a few poor countries in Africa (Tanzania, Zambia, Malawi) for programme on child labour, while the companies continue to buy tobacco leaves at cheap prices that use child labour. In Indonesia and the Philippines, child labour persists in tobacco growing.

Assunta also said “the tobacco industry is giving a paltry sum to the ILO compared to the huge profits the transnational companies reap by paying low prices to tobacco growers in poor countries. This industry continues to exploit poor countries especially in Africa and Asia.”

She said tobacco farm workers are trapped in a vicious cycle of poverty, illness and labour exploitation despite the corporate social responsibility (CSR) initiatives of tobacco companies.

These CSR activities are not real solutions and serve to divert public attention from a more meaningful and long-term ways to address the problem, Assunta noted.

She pointed out that recent international decisions expose the tobacco industry for what it really is – a harmful industry responsible for 7 million deaths worldwide every year. Since 15 October 2017, the UN Global Compact has delisted companies whose business involves manufacturing or producing tobacco products.

“Given all we know about the transnational corporations who foster the tobacco epidemic and the conditions that keep farm workers in poverty, the ILO must heed the call of the nearly 200 non-governmental organizations from the labour, health and development sectors who sent a letter asking for an end to partnerships with the tobacco industry,” she declared.

Most member states of the ILO are also Parties (183) to the WHO Framework Convention on Tobacco Control (FCTC) that calls on governments to ban tobacco-related CSR activities. Indeed, many governments have banned such CSR activities and the ILO’s tobacco sponsored programmes run contrary to these efforts, she added.

Meanwhile, an October 2017 report, which went before the Governing Board said the ILO and its constituents have long engaged with tobacco-growing communities and the tobacco industry to promote the Decent Work Agenda.

Tobacco growing and processing is a legal industry yet one that is faced with persistent decent work deficits. It is a major source of employment and income worldwide, involving some 60 million people.

The report also said that more than 80 per cent of the world’s tobacco leaves are produced by some 20 countries, the majority in Asia, followed by the Americas and Africa.

For some countries, tobacco leaf exports are an important source of revenue amounting to more than US$500 million annually. For example, agriculture supports the livelihood of more than 90 per cent of the population in Malawi. The country is largely dependent on tobacco, which accounts for 52 per cent of the total export value.

Employment levels in the tobacco leaf growing sector have decreased in some countries, notably Turkey, and increased in others, or remained stable

In June 2017, Assunta said, the UN ECOSOC adopted a resolution encouraging UN agencies to develop policies that would place a firewall between the UN and the tobacco industry. Last month, the United Nations Global Compact (UNGC) permanently banned the tobacco industry’s participation.

“It is high time the ILO dissociates itself from big tobacco whose products cause disease, death and disability globally. Big Tobacco’s collaboration with the ILO to address child labour is just a whitewash by the industry to boost its public image. These programs do little to curb child labour in tobacco fields because they do not improve the tobacco industry-driven cycle of poverty for tobacco farmers that forces children into the fields,” said Assunta.