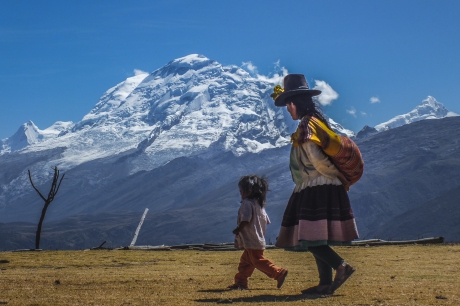 Mountains are home to 13 percent of the world’s population. Credit: FAO/Edson Vandeira

ROME, Dec 12 2017 (IPS) - International Mountain Day and the Mountain Partnership’s 15th anniversary coincided on December 11, kicking off a three-day Mountain Partnership Global Meeting at the headquarters of the Food and Agriculture Organization of the United Nations (FAO) in Rome.

An initiative of Italy, Switzerland, the UN Environment Programme and FAO, the Mountain Partnership is committed to increasing mountain conservation awareness and rebuilding development and international policies. Along with the Paris climate agreement, the 2013 Agenda for Sustainable Development emphasizes that noone should be left behind.

“Our world needs all our pieces and that includes mountains,” shared Andrew Taber passionately, Executive Director of the Mountain Institute and Chair of the Mountain Partnership Steering Committee.

“Yes, mountains are under pressure. Yes, mountains still don’t play the role they need to in their countries, but we must get out of this defensive attitude,” contributed Dominique Kohli, Assistant Director-General of the Federal Office for Agriculture of Switzerland.

This attempt to encourage positivity directed at a global audience was explained further by Thomas Hofer, Coordinator of the Mountain Partnership Secretariat, “The mountain agenda is a global agenda. Each mountain region has its specific vulnerability. There is no overall recipe to address vulnerability, so it needs to be done based on the specific situation. Vulnerability has also to do, ultimately, with political attention to mountains.”

With 1 billion people living in mountains and over half the world’s population dependent on mountains for water, food, and clean energy, the pressures mountains are facing reach across regions. Massive environmental shifts brought on by climate change, natural disasters, and land degradation threaten the abundance of fresh water and other goods cultivated in mountains.

The Himalayas are hugely affected by climate change explained Hofer, “For example, in the Himalayan area, the most prominent concern is climate change. The increase in temperature is 2-3 degrees, or even 3-4 degrees, which is much more than the global average. Glaciers in the mountains are retreating.”

Climate change reduces rainfall. In Kenya, mountain communities face water shortages and difficulties growing food. Kenya has overcome these vulnerabilities by utilizing the Partnership’s Adaptation for Food Security and Ecosystem Resilience in Africa project, which promotes collecting rainwater on roofs and building irrigation systems. Now, male and female farmers store water and can grow food for personal consumption as well as for profit.

Hunger is another major issue faced by mountain people. In Colombia, FAO helped combat hunger by implementing the framework for the Biocarebe Connections project, which along with other initiatives, increased food security through forest restoration programmes.

FAO has successfully worked with Nepal to overcome forest degradation, “Over the last twenty or twenty-five years, Nepal has become a champion in terms of community forestry and handing over the responsibility of forest management to communities has led to a strong improvement of mountain forests which is linked to institutionalization of this by the government,” said Hofer.

As the vulnerability of mountain ecosystems increases, so does migration. Many mountain men migrate to already stressed urban areas to find work leaving behind women and families.

“One and a half million young Nepali men work in the Gulf region. It has a big impact on the livelihoods and social situation of women. Women have to deal with everything; the family, the farm, elderly people,” emphasized Hofer.

To alleviate the burden on mountain women and as incentive, community investment in countries like Nepal and specifically Tajikistan, where almost 30% of the glaciers have melted, the Climate Resilience Financing Facility (CLIMADAPT) gives loans to farmers, households, and entrepreneurs who adopt measures to reduce climate change.

Even though mountain people are strong and have generations of knowledge that allows them to adapt to climate variances and survive, current hardships are exceeding normal levels.

“It is not that mountain communities now are starting to ask for help, they implement their indigenous strategies to deal with variability, but because of the lack of attention and lack of voice in terms of decision making, when the changes are really strong compared to what they are used to, they get to a certain limit,” explained Hofer.

Mountain people need a platform to speak from within their communities and countries. To relieve the immense pressure on mountain ecosystems and people, which is undoubtedly a global problem, mountain communities must be heard so governments can take united interdisciplinary actions.