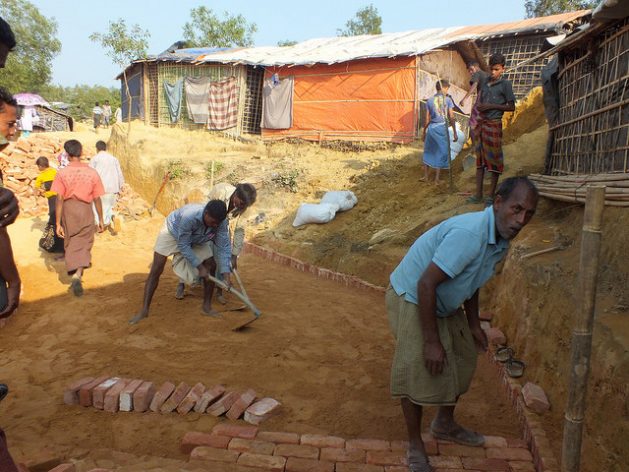 DHAKA, Feb 28 2018 (IPS) - More than half a million Rohingya refugees crammed into over 30 makeshift camps in Cox’s Bazar in southeast Bangladesh face a critical situation as the cyclone and monsoon season begins in a few weeks’ time.

The United Nations and international and local NGOs, along with the Bangladeshi government, have issued emergency calls to safeguard the population, especially those who are most vulnerable.

Already burdened with the world’s largest refugee crisis, the host country and its partners remain concerned at the slow pace of action on the ground, although preparations are already underway.

The biggest threat is the terrible conditions in the camps, most of which are frail shelters made up of bamboo sticks and plastic tarpaulins unlikely to stand up to gusting winds and heavy downpours.

In mid-January, Edouard Beigbeder, UNICEF Country Representative in Bangladesh, sent out a press statement saying, “As we get closer to the cyclone and monsoon seasons, what is already a dire humanitarian situation risks becoming a catastrophe. Hundreds of thousands of children are already living in horrific conditions, and they will face an even greater risk of disease, flooding, landslides and further displacement,”

“Unsafe water, inadequate sanitation and poor hygiene conditions can lead to cholera outbreaks and to Hepatitis E, a deadly disease for pregnant women and their babies, while standing water pools can attract malaria-carrying mosquitoes,” he added. “Keeping children safe from disease must be an absolute priority.” 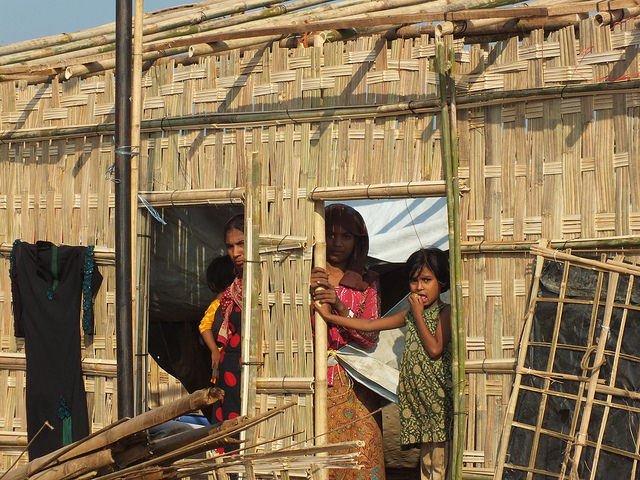 Meanwhile, massive preparations are underway in the coastal district located some 350 kilometers southeast of the capital Dhaka, where storms and cyclones are common.

At least 138,000 people along the coastal regions of Cox’s Bazar and Chittagong were killed in the April 1991 cyclone, one of the deadliest of the last century.

“As Bangladesh’s annual wet season approaches, IOM is also working to secure infrastructure and boost resilience among Rohingya refugees and the local community,” MacGregor added. “This includes the creation of disaster risk reduction safety committees to warn the refugees of what to expect and how to prepare for the wind and rain that are expected to bring deadly floods and landslides to the Cox’s Bazar camps.”

Most of the Rohingya refugees now live in crowded tarpaulin shelters on extremely slippery and muddy slopes. Unlike in the rest of the country, the terrain in Ukhiya and Teknaf, where the camps are located along the coast, is not flat but hilly. 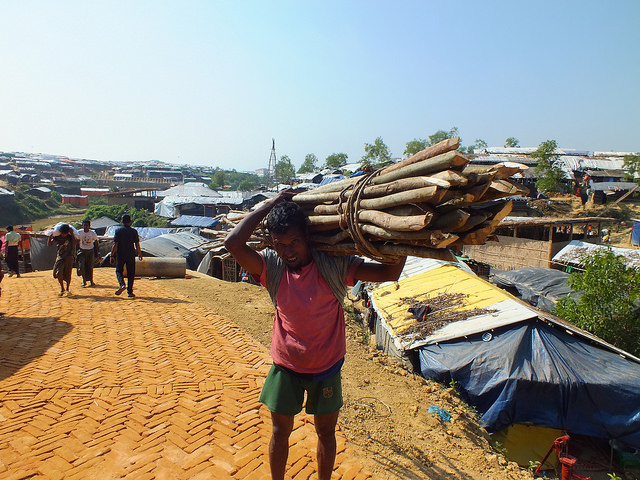 This man’s strenuous journey illustrates how difficult it can be to navigate the steep terrain of Bangladesh’s camps even in clear weather. Credit: Naimul Haq/IPS

During the heavy monsoon, rushing water along with mud and uprooted trees play havoc, as witnessed in previous years.

Rehana Begum, one of the refugees living in Kutupalong, the biggest camp told IPS, “I experienced losing my own home in 2011. I have also witnessed people being killed during heavy rainfall. Water rushes in from upstream and spares nothing on its way. Even children are known to have been killed in such situations.”

Noor-e-Khatum, a newcomer settling in at Balukhali camp, said, “I feel unsafe at night when howling wind from the sea often blows hard on my roof. It is frightening to sleep at night with children crying for help.”

Studies prepared by IOM and its partners indicate that at least 100,000 refugees and vulnerable families in the local community face life-threatening risks from landslides and floods. Thousands more refugees are also at risk from disease and may be unable to get aid if flooding cuts off access to parts of the camps.

But given the scale of the refugee population, the lack of suitable land, and the challenging environmental conditions, it will be impossible to move everyone at risk. Rapid emergency response action will be vital to reduce loss of life, IOM says.

The government is also coordinating the efforts to safeguard the Rohingya, a Muslim minority who have long faced unprecedented persecution in their ancestral homeland in Rakhine state in neighbouring Myanmar.

A complete fatality count of Rohingyas in Myanmar is unknown, but hundreds of villages have been burned to the ground and a least 6,700 Rohingya met violent deaths in Rakhine in the month after the military’s scorched-earth campaign, according to Doctors Without Borders.

According to numerous eyewitness accounts from refugee women who arrived in Bangladesh, rape and sexual violence were also used as a widespread weapon of war and to force to Rohingya from their homes.

Ali Hussain, Deputy Commissioner of Cox’s Bazar told IPS, “We have identified about 35 percent of the refugee population as vulnerable to extreme weather and plan to shift them immediately to a nearby location on 500 acres of land. We also plan to remove all obstructions on the way of the natural drainage of water and also excavate fish ponds to catch rainwater so that the areas are not flooded.”

Hussain said that the government has sufficient food stocks for the refugees to last until end of the monsoon. Soldiers deployed around the camps are also constructing new asphalt roads to facilitate movement of vehicles coming to the camps.

An anonymous army captain told IPS, “We have massive works of constructing new roads while strengthening the existing ones to facilitate smooth movement of vehicles, especially emergency vehicles like ambulances.”

Hassan Abdi, sexual and reproductive health emergency coordinator from UNFPA, The United Nations Population Fund told IPS, “We are especially concerned about the approximately 48,000 pregnant women who live in these camps and are most vulnerable, moving them to safe shelters within a short period of time can be logistically challenging.  As part of the emergency preparedness we have identified some stable facilities that can then be used to shelter pregnant women who are on their due dates (around 16,000) or expected to deliver within a week till their safe deliveries.

“At the same time,” Abdi continued, “We are also focusing on ensuring there is enough prepositioned stocks of emergency reproductive health kits like clean delivery kits for clean and safe deliveries which will be distributed to visibly pregnant mothers in the camps. Mobile medical teams will be made available to help in screening, pregnancy check-ups and facilitating safe deliveries during the monsoon.”

To enhance resilience in face of the extreme weather ahead, at least 650 people from the refugee and local communities are receiving search and rescue and first aid training from IOM, in collaboration with local Fire Service and Civil Protection Department.

Those trained will act as community focal points in emergency situations, giving early warning messages in the event of any threats of weather disasters and also assisting in first line emergency response, says the deputy commissioner’s office.

With landslides and soft slippery mud expected to cause roadblocks and obstructions of major drains and waterways, it will be crucial to be able to clear these as quickly as possible.

Light machinery will be installed and work crews established at ten strategic points across the camps as part of the Site Maintenance Engineering Project – a joint initiative between IOM, UNHCR and WFP.

Five specialist medical centres are also being established across the district to deal with outbreaks of acute diarrhoea, which are expected due to the impact of flooding on water and sanitation in the camps. This can often lead to fatalities, particularly among children.

Meanwhile, the governments of Bangladesh and Myanmar have agreed to start repatriating some 6,000 refugees, although Bangladesh’s State Minister for Foreign Affairs M Shahriar Alam clarified in remarks on Feb. 25 that no one would be forced to return against their will.

In the meantime, the influx of refugees – which less than it was – continues in the face of ongoing atrocities, now mostly in Maungdaw province, where homes have reportedly been burned, leaving villages like ghost towns.