Miroslav Lajčák is President of the UN General Assembly 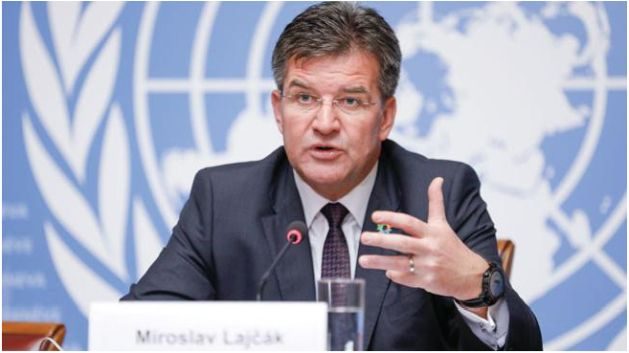 The President of the General Assembly of the United Nations, Miroslav Lajčák, briefed the press on his priorities for the Assembly's seventy-second session, on 10 October 2017 at the United Nations Office at Geneva. ©UNIS/GENEVA

UNITED NATIONS, Mar 20 2018 (IPS) - At the start of the seventy-second session of the General Assembly of the United Nations I emphasized our common goal: peace and a decent life for all people on a sustainable planet. Many leaders echoed this overarching priority at the general debate and beyond.

One very important element of this is universal access to water and sanitation. At a most basic level, human beings cannot survive without water. Equally important is sanitation, a lack of which negatively affects our quality of life and claims the lives of millions each year.

One thing is clear: we all share a common goal of achieving universal access to water and sanitation. We have come a long way towards achieving this goal but we have much further to go.

Water runs through every single United Nations priority. Lack of access to water and sanitation can undo progress made in the areas of development, human dignity, and peace and security.

The pressing question is: how can we meet the existential challenge of ensuring access to water and sanitation for everyone once and for all?

I would like to reflect on three things: many problems in accessing water and sanitation still exist; we have come a long way in combating these problems; and we have a lot more work to do. The launch in March of the International Decade for Action, “Water for Sustainable Development”, 2018-2018 will propel us to reach further.

Where we are today

For people on the ground, especially the vulnerable, these numbers translate into hardship, insecurity and loss of livelihoods. For instance, women and girls in some developing countries still embark on dangerous journeys in search of drinking water or to defecate in the open because they do not have access to toilet facilities, which exposes them to violence, including sexual abuse.

Further, children are dying from entirely preventable diseases, resulting from poor quality water and sanitation. Diarrhoea is the second leading cause of death in children under 5 years of age.

Water can also be the source of disasters and conflicts, presenting an obstacle to meeting many Sustainable Development Goals (SDGs). The frequency and severity of water-related disasters are increasing dramatically. They claim lives and disproportionately affect progress towards achieving the SDGs in developing countries, in particular the most vulnerable, such as small island developing States and the least developed countries.

Due to the constantly growing demand for water provoked by many factors, including population growth, food and energy production, and the adverse impacts of climate change, water resources will become increasingly scarce. Therefore, it is expected that tensions over access to water could intensify at both the national and international levels.

In this context, the Global High-level Panel on Water and Peace estimates that by mid-century, close to 4 billion people, which represents about 40 per cent of the world’s population, will live in water-stressed basins.

Despite these alarming projections, providing access to water and sanitation is possible and we have made some improvement. However, the progress achieved has been uneven and many people are still being left behind.

It is against this backdrop that Member States of the United Nations have put a special focus on the critical issue of access to water and sanitation during the last few decades, starting from the first United Nations Water Conference, held in 1977, in Mar del Plata, Argentina.

More and more, the United Nations General Assembly has been recognizing the centrality of water to sustainable development. From the Millennium Development Goals, which established a target of halving the proportion of people without access to safe drinking water to the General Assembly’s recognition of water and sanitation as a human right, the United Nations has laid the foundations.

This goal, as well as other related goals and targets, aims to address all issues related to the water cycle, including access to adequate water and sanitation, improving quality and efficiency of water delivery, sustainable water management as well as strengthening international cooperation. At the upcoming high-level political forum on sustainable development, we will learn of progress being made on SDG 6, including at the national level.

More recently, the General Assembly unanimously proclaimed the period from 2018 to 2028 the International Decade for Action, “Water for Sustainable Development”, to commence on World Water Day, 22 March 2018. The formal launch of this Water Decade, which is the second of its kind, will be an important opportunity for the international community to reiterate its commitment to achieving water-related goals and targets. It will also offer an opportunity to contribute to the follow-up and review of SDG 6, at the high-level political forum in July 2018.

Throughout the Decade, our focus should be on people. The true measure of the relevance of the United Nations is the meaningful change it brings to people’s lives around the world. We should emphasize the implementation of the various frameworks related to water and sanitation, with a particular focus on women and children, who are disproportionately affected by the lack of access to these services.

The Decade should also be catalytic in building new and innovative partnerships to achieve water-related goals. It should offer a platform for advocacy and networking in support of our universally agreed goals.

Let us ensure that no one is left without access to water and sanitation by the end of this decade.

Looking Ahead: We Need All Hands on Deck

We have the tools to achieve access to water and sanitation for all. In some cases, the tools need to be enhanced; in other cases, we need simply to use them.

Meeting water and sanitation goals and targets means taking action, both nationally and internationally, and adopting a holistic approach that addresses the entire water cycle. Further, we must treat water as a cross-cutting issue, the scope of which extends beyond SDG 6.

At the international level, the United Nations system must continue to play a leading role in promoting cooperation and building partnerships, and should offer a platform for continued discussion, policymaking and mainstreaming of water-related issues to relevant processes.

We must also address international governance issues related to water. Within the United Nations system, water and sanitation is addressed in a fragmented and poorly coordinated manner.

This is despite efforts by the UN-Water mechanism as well as the work undertaken by different agencies, funds and programmes. Going forward, we need a platform for regular intergovernmental deliberations to keep track of and push for progress on the implementation of water-related goals.

The alignment of the agendas of the General Assembly, the Economic and Social Council and their subsidiary bodies with the 2030 Agenda for Sustainable Development, as well as the repositioning of the United Nations development system, could offer solutions to this challenging situation.

The conclusions and recommendations of the working dialogue, convened during the seventy-first session of the General Assembly, on: “Improving the integration and coordination of the work of the United Nations on the water-related goals and targets under its sustainable development pillar, with particular emphasis on the 2030 Agenda for Sustainable Development”, could also contribute to resolving the governance challenges.

While cooperation at the international level remains important, governments bear the primary responsibility to meet water and sanitation needs of their populations. Water and sanitation need to be mainstreamed into national development planning and budgeting processes, and must include sustainable use and efficiency, address wastewater, promote education and raise awareness.

For effective cooperation nationally and internationally, involvement of all stakeholders is critical. Financial institutions, the private sector, civil society and high water-use sectors, such as energy, agriculture and industry must all be involved in developing plans and policies.

Importantly, we must mobilize financing for infrastructure and building capacities for access to water and sanitation. Traditional financial sources, including official development assistance, are not sufficient, even though critical for many developing countries. We must rely on all sources available, national and international, public and private, as well as blended and innovative financing.

This could contribute to strengthening regional peace and security in the long run. Cooperation between States to establish frameworks on the use, management and benefit-sharing of water resources, should be pursued. This concerted action will help prevent tensions from escalating into violence.

The United Nations, Governments and all stakeholders have an obligation to people to deliver on water-related goals and targets. I am committed to maintaining momentum towards this end.

This article first appeared in the UN Chronicle, published by the Department of Public Information. The link follows: https://unchronicle.un.org/article/achieving-universal-access-water-and-sanitation