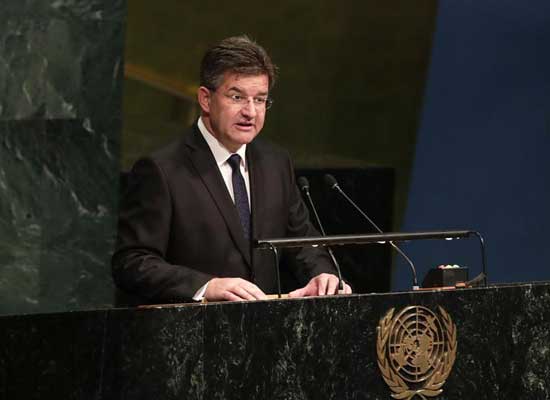 Slovak Foreign Minister Miroslav Lajcak delivers a speech after he was elected as president of the 72nd session of the United Nations General Assembly, at the UN headquarters in New York, May 31, 2017. Credit: UN Photo

STOCKHOLM, May 21 2018 (IPS) - In the paradoxical battle against military conflicts, is preventive diplomacy one of the political remedies that can help deter wars before they break out?

Miroslav Lajcak, President of the UN General Assembly, points out that prevention takes many forms, and it must tackle conflict at its roots – before it can spread.

“This means stronger institutions. It means smart and sustainable development. It means inclusive peacebuilding. It means promoting human rights, and the rule of law.”

At a recent three-day Forum on Peace and Development, sponsored by the Stockholm International Peace Research Institute (SIPRI) and the Swedish Foreign Ministry, participants came up with several responses, including international mediation, pre-conflict peacebuilding, counter-terrorism — and, perhaps most importantly, sustainable development that aims at eradicating poverty and hunger.

Lajcak cites a recent World Bank-United Nations report, titled “Pathways for Peace”, that argues in terms of dollars and cents: that for every $1 spent on prevention, up to $7 could be saved – over the long term.

Speaking on the “Politics of Peace” – the theme of the SIPRI forum which concluded May 9—he said: “Peace can be political. It can be complicated. And it can be messy. Mediators do not have an easy job.”

Jan Eliasson, chairman of the SIPRI Board of Governors and a former Swedish Foreign Minister, points out that “aside from saving and improving human lives, studies suggest that investing $2 billion in prevention can generate net savings of $33 billion per year from averted conflict”.

And according to a World Bank survey, he said, 40 percent of those who join rebel groups do so because of a lack of economic opportunities?

“It is time for us all to get serious about prevention and sustaining peace if we are to achieve the peace envisioned in the SDGs by 2030. Policy makers must focus efforts on prevention, committing additional resources and attention to the highest risk environment,” said Eliasson, a former UN Deputy Secretary-General.

In an introduction to the “Politics of Peace,” SIPRI says targeted, inclusive and sustained prevention can contribute to lasting peace by reducing the risk of violent conflict.

“Unfortunately, the political will to invest in prevention is often lacking where it is needed most,” notes SIPRI.

The UN’s peacekeeping budget for 2017-2018 is estimated at a staggering $6.8 billion. But how much does the UN really spend on preventive diplomacy?

At a high level meeting on peacebuilding last month, several delegates emphasized the concept of prevention. But complained about the failure to aggressively fund such prevention.

Asked how one could explain that “meagre resources, a little bit over $1 million” is being devoted to preventive diplomacy, UN spokesman Stephane Dujarric told reporters April 25: “I think that’s a question perhaps to those who allocate the budget. The Secretary General has repeatedly called for greater resources and greater emphasis to be put on prevention.”

The complexity of violent conflict, he argued, makes it prolonged, deadly, and economically costly to the countries which experience conflicts.

According to Collier et. al (2003), “by the end of a typical civil war, incomes are around 15 per cent lower than they would otherwise have been, implying that about 30 per cent more people are living in absolute poverty” due to conflict. And according to the same authors, conflict would also lead to a permanent loss of around 2 per cent of gross domestic product (GDP).

Chatterjee also pointed out that the main damage of conflict emanates from its adverse effects of diverting resources from the productive sector to violence and destructive activities.

“These widespread conflicts are imposing an enormous cost not only to the countries where conflicts are raging but also to their neighboring countries, which often end up hosting refugees crossing the borders to seek a safe-haven. This further results in considerable economic and environmental problems for the host countries.”

He said armed conflict and violence are increasingly complex, dynamic and protracted. Over 65 million people were forcibly displaced in 2016 alone. Many conflicts have endured for decades; others have repercussions well beyond their immediate area.

Sanam Naraghi Anderlini, Executive Director of the International Civil Society Action Network (ICAN) told IPS that after so many wars and so much destruction, “I’m stunned that governments still think that weaponry is the pathway to peace and security.”

“When individuals are able to weaponize a car, a bus or truck, hi-tech missiles aren’t going to solve the problem. We need to be looking at the root causes and drivers.”

She said this brings up issues of gross inequality, rising extremism that’s fostering un-belonging, and other issues relating to education, mental health and so forth.

She asked: “What does it cost to build schools in Northern Nigeria so kids have a chance of a future? What does it cost to develop state of the art environmental programs that can preserve water and enable farmers to grow crops, so they aren’t forced to migrate to cities and be jobless and desperate?”

Last week, UN Secretary-General Antonio Guterres and his Envoy on Global Education, Gordon Brown, received a petition signed by some 1.5 million young people calling for more investment in education. The petition was delivered by three youth activists from India, Kenya and Sierra Leone.

In the aftermath of the Cold War, said Naraghi Anderlini, “we recognized that human security was integral to state security. The 9/11 attacks threw us off course and we entered a realm of perpetual war and retaliations. Yet at the core sits issues of human security, dignity, legitimate grievances and aspirations. State failure is central to everything we see – from corruption to excessive violence and being absent in basic service provision.”

She warned that “governments can try to hide behind their bluster, weaponry and techno-wizardry but we are hurtling towards a new unknown, but this will not be the path to peace.”

The tragedy is that ordinary people, civil society actors in communities everywhere, have the answers and solutions, she argued.

“They have rolled up their sleeves and with limited resources they are doing extraordinary work. They raise uncomfortable truths for this reason, governments and even the UN system don’t bring them to the table. They provide ‘side events’ and agree to host them on the margins of major summits.”

But the citizens are not marginal, they are at the very center of any state. And civil society organizations that enable citizens to contribute to solving problems should be equal partners in the space of decision making globally, she declared.

Chatterjee told IPS the other emerging threat to the global community is violent extremism which has not only sets in motion a dramatic reversal of development gains already made, but also threatens to stunt prospects of development for decades to come, particularly in border lands and marginalized areas as well as affecting developed countries.

To support prevention of conflict and violent extremism; it is important to focus on the root causes, drivers of conflict and radicalization, which are intertwined with poverty, social, cultural, economic, political and psychological factors.

Extremism, which often evolves into terrorism, has its origin in poverty and human insecurity, which is partly linked to exclusion, marginalization and lack of access to resources and power, he noted.

A recent UNDP report – “the Road to Extremism”- which is based on extensive data collected from East and West African countries, revealed that poverty and marginalization to be the main factors that drive young people to join extremist groups. The study also found that the tipping point is how the government treats the community and the youth.

In addressing both violent conflict and extremism, Chatterjee said, it is important to invest in prevention because attempting to address the problem once it has erupted will cost more and huge amount of resources. And, it will also be complicated, as in the case of Somalia or the Central African Republic (CAR).

That is why the UN Secretary General’s reform agenda emphasizes preventing violent conflicts before they erupt into full-fledged crises. The Secretary General’s agenda also links conflict to SDGs, and the principle of leaving no one behind espoused by the SDGs is a critical condition for sustainable peace and prosperity, said Chatterjee.

He said this approach will strengthen institutions to sustain peace as the best way to avoid societies from descending into crisis, including, but not limited to, conflict, violent extremism and ensure their resilience through investments in inclusive and sustainable development.

“The bottom line is without peace, little or nothing can be achieved in terms of economic and social progress and without development it would be difficult to achieve sustainable peace,” declared Chatterjee.

Asked for his reaction, Dan Smith, SIPRI Director, summed it up as follows: “In general I think that a Norwegian politician, Erik Solheim, now head of UNEP, put it well when he said, at a public meeting many years ago, in response to a question about why prevention is not emphasised more, something along these lines: “Because, to my knowledge, no politician has ever been re-elected on the basis of preventing a war that might not have happened in a faraway country that none of her or his voters have ever heard of.”