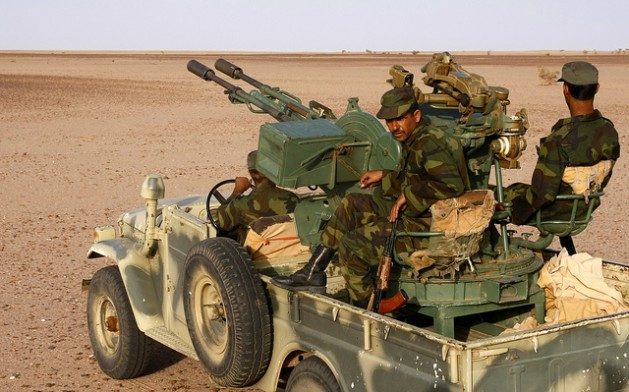 State parties to the Arms Trade Treaty (ATT) are obligated under international law to assess their exports of conventional weapons to determine whether there is a danger that they will be used to fuel conflict. Credit: Karlos Zurutuza/IPS

In 2015, a high-level United Nations panel recognized how illicit weapons traffickers embed themselves in conflicts, fueling the violence and preying on vulnerable societies. The security and humanitarian impact of small arms is particularly alarming in conflict-affected societies, where weak institutions and border controls allow for diversion of arms in large numbers.

Spoilers to peace use the free flow of small arms to derail peace processes, threaten elections, fuel terrorism, and commit gender-based violence, all while restricting deliveries of humanitarian assistance and complicating efforts to move from conflict to peace.

It is not just civilians whose daily lives are threatened by the diversion, poor regulation and illicit transfer of small arms. In December 2017, a top UN peacekeeping report argued that small arms were responsible for most of the violence behind a rise in peacekeeping fatalities since 2011. The United Nations can and must do more to address this problem.

Our peacekeeping and disarmament departments are working to save lives and build a safer, more secure world by helping prevent armed conflict and mitigating its impact.

This year, United Nations Secretary-General António Guterres launched Action for Peacekeeping (A4P), an initiative to strengthen the effectiveness and impact of UN peacekeeping. A4P mobilizes governments that support, contribute to and host peacekeeping operations and helps peacekeepers respond better to the needs of the people that they serve and protect.

On the ground, our peace operations are deepening their support to governments on small arms control. In the Central African Republic, Libya and Mali, for example, the United Nations has assisted with registering and marking weapons, as well as with establishing national small arms commissions and stockpile management programmes.

Simultaneously, as part of Disarmament, Demobilization and Reintegration processes supported by peacekeeping operations, the United Nations is also implementing effective and context-specific approaches, such as Community Violence Reduction, which is programming that counters instability and violence by helping populations address local needs. Community-based activities in Mali and the Central African Republic, for example, are tackling drivers of armed violence and building trust through grassroots activities.

Our departments are also working together to develop practical guidance and training for our personnel, maximizing their ability to address weapons and ammunition management prior to and during United Nations peace operations. They are also supporting similar initiatives for African Union-led peace operations.

As part of his new disarmament agenda, the Secretary-General has set out new and innovative ways to fund work by governments and United Nations offices to tackle the small arms threat.

This work—which will range from managing and destroying weapons to supporting law enforcement and educating the public—is aimed at enhancing what the Secretary-General calls “disarmament that saves lives”. We hope that such efforts will contribute directly to the achievement of the Sustainable Development Goals.

In addition to United Nations efforts, regional and national initiatives are critical. The African Union has committed “to own its future” by ending armed violence across the continent by 2020, and the United Nations stands behind this effort to “silence the guns”.

At the global level, governments gathered in New York last month and renewed their commitment to stemming the illicit circulation of small arms, including in conflict-affected settings. They recognized that the illicit trade in small arms continues to sustain conflict and exacerbate armed violence.

Investing in arms control is investing in conflict prevention. By working at every level to rein in uncontrolled weapons, we can curtail violence, reduce human suffering and sow the seeds for a more peaceful future.