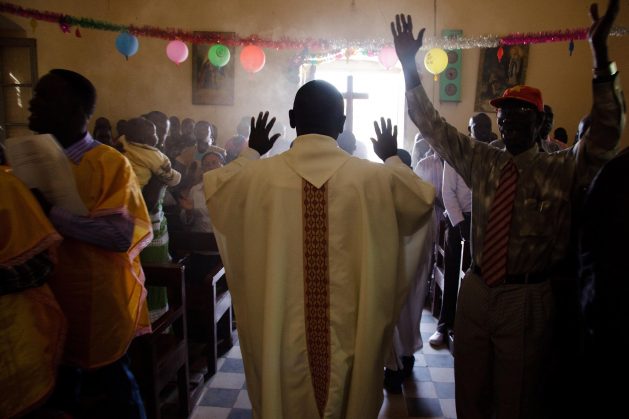 JUBA, Jul 3 2018 (IPS) - Throughout fifty years of struggles, South Sudan’s different churches have remained one of the country’s few stable institutions, and in their workings toward peace, have displayed a level of inter-religious cooperation rarely seen in the world.

Priests and pastors from numerous denominations brought humanitarian relief to civilians during South Sudan’s long wars for independence — often considered a fight for religious freedom for the mostly Christian south — from the hard-line Islamist government to the north in Khartoum, Sudan.

Amid destruction and failed politics, church leaders emerged as the only players left standing with any credibility and national recognition, enabling them to effectively lobby the international community to support the southern cause while also brokering peace between communities torn apart by war and ethnic strife.

However, they have been less able to influence politicians and generals in South Sudan’s latest civil war raging since 2013, which began just two years after gaining independence from Sudan. Last week, South Sudan’s President Salva Kiir and rebels, led by his former vice president Riek Machar, signed a peace agreement to bring about a ceasefire. But Reuters reported that fighting broke out again on Sunday, killing 18 civilians.

“The new outbreak of war caught the Church unprepared,” says John Ashworth, referring to the five-year civil war. Ashworth has worked in South Sudan, including advising its churches, for more than 30 years. “While the Church played a major role in protecting people and mobilising humanitarian support, and in mediating local peace and reconciliation processes, it took quite a while to rebuild the capacity to implement national level initiatives.”

Although Islam has dominated the region for centuries, Christian roots in Sudan and South Sudan go back to the 5th century. Missionaries were active in the 1800s, mainly from the Anglican, Presbyterian, Catholic and Coptic churches.

Though there are conflicting reports about South Sudan’s exact religious composition, Christianity is the dominant religion, with a 2012 Pew Research Centre report estimating that around 60 percent are Christian, 33 percent followers of African traditional religions, six percent Muslim and the rest unaffiliated.

In the face of shared adversity, South Sudan’s Christian churches embraced an ecumenical approach to establish the South Sudan Council of Churches (SSCC), which spearheaded the churches’ joint efforts that proved heavily influential in the 2005 peace deal that ended Africa’s longest-running civil war.

The SSCC continued its involvement in the process that led to the January 2011 referendum on independence, in which an overwhelming majority of South Sudanese voted to secede and become Africa’s first new country since Eritrea split from Ethiopia in 1993. South Sudan formally gained independence from Sudan on Jul. 9, 2011.

But all those achievements began to unravel in 2013 when government troops began massacring ethnic Nuer in the capital, Juba. Afterwards, the national army, called the Sudan People’s Liberation Army (SPLA), split along ethnic lines during a violent uprising, pitting ethnic Dinka loyal to Kiir against Nuer led by Macher.

Both sides committed atrocities, while the narrative of fighting for religious freedom was manipulated for political advantage. The SPLA has painted themselves as Christian liberators — atrocities notwithstanding — their propaganda referring to the churchgoing Kiir as the “Joshua” who took South Sudan to the promised land of independence.

But the church has been caught up in the divisive fallout too.

“The current war has divided people along ethnic lines — the church is not immune to these divisions,” says Carol Berger, an anthropologist who specialises in South Sudan.

“While individual clergy may have their own political sympathies, and while pastors on the ground continue to empathise with their local flock, the churches as bodies have remained united in calling and for an end to the killing, a peaceful resolution through dialogue, peace and reconciliation — in some cases at great personal risk,” Ashworth says.

Some have accused the church of inaction during the latest civil war. Ashworth suggests that after the 2005 peace agreement the SSCC “took a breather to rebuild and repair,” with the 2013 outbreak of war catching them unprepared and less capable. Subsequently it has taken church leaders longer than expected to rebuild capacity, but now the SSCC is taking action to make up for lost ground.

It has begun by choosing a new Secretary General, says Philip Winter, a South Sudan specialist who has long been engaged in its peace processes. He notes how the SSCC was called upon by the warring parties negotiating in Addis Ababa, the Ethiopian capital, to help them get over their differences — something the Intergovernmental Authority on Development (IGAD) failed to do as a mediator.

Following the talks in Ethiopia in June, both warring sides signed a peace agreement in Khartoum, Sudan’s capital, a week later.

“The SSCC recognised that is was perhaps not as effective as the most recent conflict required,” Winter says. “So they are once more playing an important, if discreet, role.”

The SSCC’s renewed impetus includes implementing a national Action Plan for Peace (APP), which recognises the need for a long-term peace process to resolve not only the current conflict but also the unresolved effects of previous conflicts which are contributing causes of the current conflict. The SSCC says the APP may continue for 10 or 20 years.

At this stage of the plan, the SSCC hopes to see a visit to the country by Pope Francis, the head of the Catholic Church. Earlier this year a delegation of Christian leaders from South Sudan met the Pope and urged him to visit.

“We gave the situation of the Church in South Sudan, that the people are hungry for peace, and they expect the Pope to visit them,” the Bishop Emeritus of Tori, Paride Taban, a member of the delegation, told media after meeting the Pope. “He [the Pope] encourages us not to fear. We are not alone, he is with us, and he will surely come.”

The bishop spoke at the Rome headquarters of Sant’Egidio, a peace and humanitarian group that is trying to help peace efforts in South Sudan. The group played a crucial role in the 2015 papal visit to another war-torn country, the Central African Republic, and was instrumental in the signing of the Mozambique peace accords in 1992.

The Pope previously postponed a planned 2017 South Sudan trip with Justin Welby, the head of the Anglican Church. Most media assumed that decision was based on the country being too dangerous to visit. But Welby told media the visit was postponed to ensure it would have the maximum impact in helping to establish peace. However, with the current, tentative ceasefire, the pope may visit to consolidate peace.

“You’re playing a heavyweight card and you have to get the timing right,” he said. “You don’t waste a card like that on anything that is not going to work.”

Others, however, remain deeply sceptical of how the Pope could visit.

“I see no way that the Pope could visit South Sudan,” says Berger. “The capital of Juba is a sad and troubled place these days. People have left for their villages, or neighbouring countries. Shops and hotels have closed. The town is heavily militarised and there is hunger everywhere.”

Whether the Pope would have a lasting impact, if he comes, remains to be seen. But current events indicate why the SSCC think it worth his trying, as the world’s youngest state remains afflicted by war and famine, and mired in an almost constant state of humanitarian crisis.

“More exhortations to the antagonists to stop fighting are largely a waste of breath,” Winter says.