Peace & Equal Political Participation of Women in the DRC 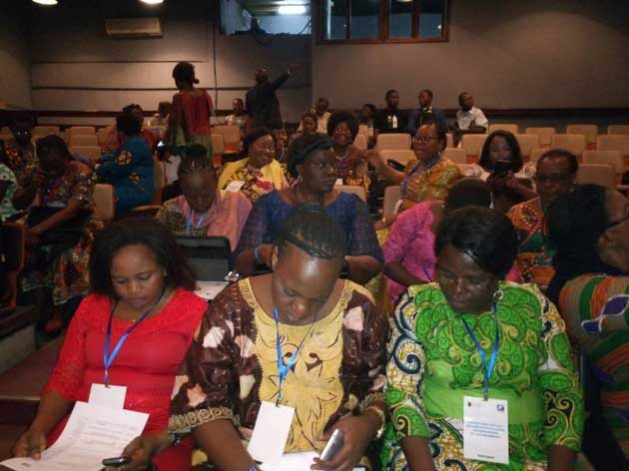 UNITED NATIONS, Jul 27 2018 (IPS) - I am a women’s human rights defender and President of Synergie des Femmes, a platform of 35 organizations working for the improvement, promotion, defense, respect and protection of women’s rights in the Democratic Republic of Congo (DRC).

We offer particular support to women who are victims of sexual violence, and work towards the establishment of lasting peace in North Kivu in the east of the country.

On July 26th I briefed the United Nations Security Council on the current situation for women in the DRC in the areas of the UN mission (MONUSCO), the growth of insecurity and the increase of cases of sexual violence against women and girls, and the tense political climate following the failure to hold elections before the constitutional deadline.

The recent decision to close some bases of MONUSCO has exposed the civilian population in sensitive areas. We are left in a precarious position. Despite the rapid deployment, interventions often arrive too late, when irreparable damage has already been done.

Following a decrease in financial resources, the Joint Human Rights Office is no longer present on the ground and, as a result, can no longer effectively document the cases of serious human rights violations that are now reported.

We fear disorder during the proposed elections at the end of this year and really hope that MONUSCO will ensure that Congolese police are properly trained so that order can be maintained and that polling stations can be secured. This is extremely important as fair and transparent elections are at the core of ensuring a peaceful and prosperous nation.

Meanwhile, the situation of women – and particularly those victims of sexual violence – is worsening day by day. The increase in armed groups as part of the ongoing war here has meant that mass rapes have continued, while populations have been displaced. In North Kivu alone, cases of rape and violence have increased this year by more than 60%.

The political climate has also made things more dangerous. Things are very tense at the moment as elections were not held before the end of last year as expected. This goes against our constitution.

At the time various demonstrations were shut down by the police, civilian deaths occurred, material damage was extensive (especially convents and Catholic churches), arbitrary arrests took place of the leaders of the citizen movement, of human rights defenders and of opposition politicians.

With only five months to go before the elections are due to take place (again), the political environment continues to be extremely difficult.

In addition to this political instability and the brutal repression of dissident voices, several legal reform projects initiated by the Congolese government have further reduced Congolese freedom of expression and civic spaces. One of these aims to change how non-governmental organizations (NGOs) are run here, which could have major ramifications.

Against this backdrop the participation of women in the electoral process – a tried and trusted way of increasing the chance of lasting peace – has remained very low. A problematic electoral law brought in at the end of 2017 is a serious obstacle to our rights and freedoms.

It imposes many constraints, including the requirement of candidates to reach a threshold of support of at least 1% of votes at the national level. As a result, no provincial election nomination file was filed by the deadline date in some constituencies.

This law also discriminates specifically against women in the electoral contest and doesn’t take into account their socio-economic conditions. It states that a deposit of $ 1,000 must be made by candidates. This is an astronomical sum for women and young people living for the most part on an income of less than $1 per day.

UN Security Council Resolution 1325, adopted in October 2000, calls for an increase in the participation of women in all peacebuilding and security efforts. In late 2017, I co-ordinated a group of over 60 women from all provinces of the DRC to make this a reality for Congolese Women.

We set up the Congolese Women’s Forum to be able to achieve this and have pleaded with the government to change this discriminatory law, which is likely to reduce rather than increase women’s political participation in the DRC.

The upcoming elections will also be problematic in terms of how they are likely to be run. The proposed use of the voting machines will cause significant challenges and may lead to fear of electoral fraud. The DRC currently has a population that is 65% illiterate – mostly women and young people – who would have enormous difficulties using these machines.

This is the environment in which we currently live in the DRC. Every day we have new obstacles to overcome but we are also hopeful for a better future. In my statement to the Security Council and Member States I recommended that five steps are taken.

We want them to put pressure on the DRC government to implement policies which truly promote women’s participation in decision-making and women’s candidatures for elections.

We want them to ask the government to respect the freedom of expression, the right to demonstrate and the civic space of the Congolese population, that the New Year’s Eve Agreement, the Constitution and the rule of law are all respected, that MONUSCO restore its bases in sensitive areas to ensure the effective protection of civilians, that it supports the ongoing electoral process and ensures that the Joint Human Rights Office effectively documents human rights violations.

Finally, we recommended that the Security Council really supports civil society organizations that work for the promotion and defence of women’s rights – particularly in training women in leadership to be able to access decision-making positions. This is a key component of ensuring we finally see lasting peace in this country.