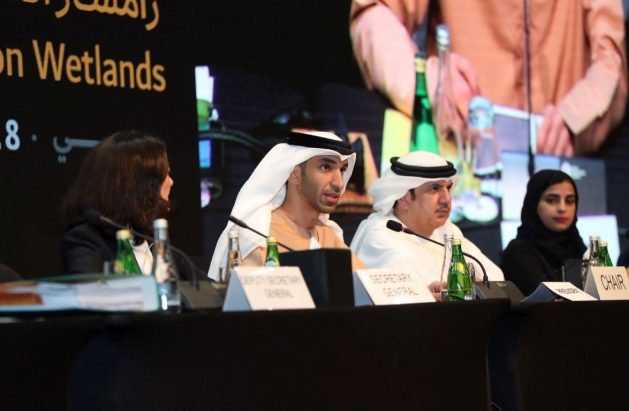 DUBAI, Oct 30 2018 - The Ministry of Climate Change and Environment (MOCCAE) concluded the 13th Meeting of the Contracting Parties to the Ramsar Convention on Wetlands (COP13) in Dubai, with three UAE-led resolutions passed and the declaration of Jebel Ali Wetland Sanctuary as a Wetland of International Importance, also known as a Ramsar Site.

After negotiations led by MOCCAE, two new UAE-submitted and one UAE-supported resolutions were adopted at COP13. One of the resolutions put forth by the UAE – in line with the Wetlands for a Sustainable Urban Future theme – aims to protect and manage wetlands under specific guidelines that increase climate change and extreme weather events resilience. In addition, the resolution calls on all countries to involve various stakeholders, including governments, private sector entities, non-governmental organisations, research centers, educational institutions, tourism industry, heritage and culture sector, indigenous peoples and local communities to take part in the decision-making process on wetland issues.

The second resolution adopted includes sustainable urbanization, climate change and wetlands to invite the United Nations General Assembly to recognize February 2, the date of the adoption of the Ramsar Convention on Wetlands, as World Wetland Day. Another resolution was supported by the UAE to introduce Arabic as an official Convention language, aside from English, French and Spanish, so as to foster engagement, raise awareness and improve the implementation of the Convention for Arabic-speaking contracting parties. In addition, it would help appreciate the range of distinct wetland types such as wadis, sabkhas and oases in Arab countries.

Dr. Thani bin Ahmed Al-Zeyoudi, Minister of Climate Change and Environment , said: “Throughout COP13, there were many references made to climate change and its negative effects, and more importantly, how wetlands can play a major role in the mitigation of climate change and to support countries in meeting their Sustainable Development Goals. As a pioneer in the region for green economy and environmental efforts, the UAE was honored to have hosted COP13 and to drive international cooperation and the exchange of best practices to protect these valuable ecosystems that have an impact on our lives, society and our future.”

At the closing ceremony of COP13, Martha Rojas Urrego, Secretary General of Ramsar Convention, said: “For the first time we have the evidence that we are losing wetlands, and their critical services for people, three times faster than forests. My hope is that for the next three years until the next COP, parties can rise to this challenge and implement policies that will effectively integrate wetlands in the sustainable development agenda. The Ramsar Secretariat will support parties to ensure to turn the tide and reverse wetlands’ loss.”

Dawoud Al Hajri, Director General of Dubai Municipality – the main sponsor of COP13, said: “Dubai Municipality’s vision focuses on building a happy and sustainable city, and a part of achieving that goal is to ensure the protection and sustainability of the environment. We are proud to now have a second Ramsar Site of International Importance, and to continue protecting our ecologically-significant areas. Through COP13, we are confident that each of us will play our part in furthering the cause for the protection and wise use of wetlands for humanity.”

Located between Jebel Ali and Ras Ghantoot and spanning 21.85 km2, Jebel Ali Wetland Sanctuary was recognized as the UAE’s eighth Ramsar Site, due to housing rare and unique wetland types comprising coral reefs, mangroves, shallow lagoons, seagrass, oyster beds and sandy shorelines, that support 539 species of vulnerable, endangered and critically endangered species of flora and fauna. The sandy beaches of Jebel Ali are also one of the key breeding sites for the critically endangered hawksbill turtle. Established in 1998, Jebel Ali Wetland Sanctuary is recognized by the Convention on Biological Diversity (CBD) as one of the Ecologically and Biologically Significant Areas (EBSAs) in the Arabian Gulf.

The Ministry of Climate Change and Environment was also instrumental in launching the results of the Emirates Nature-WWF Coastal and Marine Habitat Mapping project in the Northern Emirates, on the sidelines of COP13. The project mapped 783.2 km2 in total area along a 400 kilometers’ coastline, in which 17 habitat types were identified. With increasing human activities taking place at sea, along with the growing effects of climate change, marine spatial management is crucial in achieving the sustainable and wise management of marine resources.

Six Chinese cities were awarded the Wetland City Accreditation at COP13, in appreciation of China’s commendable efforts on the conservation and wise use of wetlands. The other cities given the Wetland City Accreditation were Amiens, Courteranges, Pont Audemer and Saint Omer in France, Lakes by Tata in Hungary, Republic of Korea’s Changnyeong, Inje, Jeju and Suncheon, Mitsinjo in Madagascar, Colombo in Sri Lanka and Ghar el Melh in Tunisia.

The Ramsar Convention on Wetlands of International Importance is an intergovernmental treaty that provides the framework for national events and global cooperation for the conservation of wetlands and the rational use of their resources.