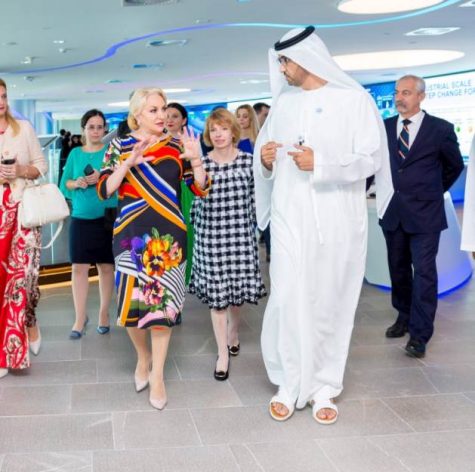 During the meeting Dr. Al Jaber conveyed the greetings of the UAE leadership to the Romanian leadership and government, emphasising the UAE’s keenness to boost bilateral ties. He stressed the need for both parties to take advantage of the opportunities to enhance bilateral trade.

Later, Dr. Al Jaber hosted a lunch for Romanian Prime Minister, which was also attended by the UAE’s Ambassador to Romania, Ahmed Abdullah Saeed, and Romani’s Ambassador to the UAE, Adrian Macelaru. During the visit, Prime Minister Dancila also met with members of ADNOC’s Future Leaders Programme, which is designed to identify the company’s brightest and best Emirati employees and provide them with the knowledge, skills and experience they will need to ensure ADNOC continues to thrive in the future energy landscape.

During her visit to ADNOC she expressed her admiration for how ADNOC is harnessing the enabling power of digitalisation and has adopted an innovative partnership approach to drive growth.

Diplomatic relations between the UAE and Romania were formally established in 1989. Romania opened its embassy in Abu Dhabi in 1991 and the UAE Embassy opened its doors in Bucharest in 2004. In April, the UAE-Romania Joint Committee held its first ministerial meeting in Bucharest. The meeting was chaired by Dr Al Jaber.

Bilateral non-oil trade between the UAE and Romania amounted to US$573.8 million in 2016. UAE cumulative investment in Romania from 2003-2017 amounted to US $103 million. Austria’s OMV, which owns 51 percent of PETROM, is part-owned by a subsidiary of Abu Dhabi’s Mubadala Investment Company. OMV has a 20 percent stake in ADNOC’s SARB and Umm Lulu offshore concession area.