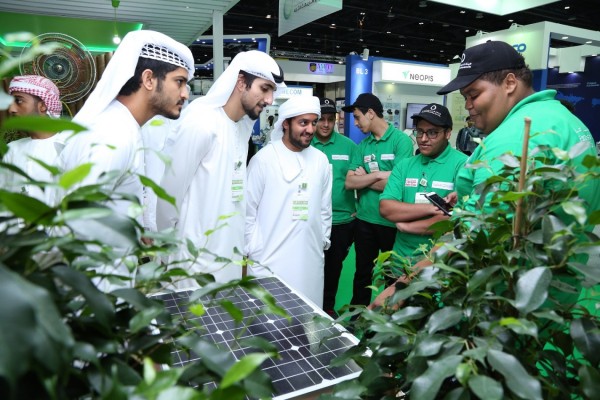 DUBAI, Oct 11 2018 - The Dubai Electricity and Water Authority, DEWA, is keen to promote all forms of green energy as a clean alternative to conventional energy derived from environmentally friendly fossil fuels, in line with the 17 Sustainable Development Goals, SDGs, of the United Nations 2030 Agenda, and with DEWA’s vision to be a sustainable, innovative, world-class utility.

DEWA believes that renewables such as solar, wind and water power are keys to achieving sustainable economic, social and environmental development, as they help to avoid several negative consequences resulting from irrational human behaviour.

In this context, DEWA is organising the 20th Water, Energy, Technology, and Environment Exhibition, WETEX 2018, from 23rd to 25th October, 2018, at the Dubai International Convention and Exhibition Centre.

It will also focus on its beneficial impact on maintaining health, improving living standards and reducing poverty, securing new jobs, and on protecting the environment through the conservation of natural resources, as well as on reducing the causes of climate change, the number and severity of natural disasters resulting from global warming, and the toxic effect of acid rain and the accumulation of harmful waste. Environmental citizenship will also protect endangered species, fish, and water from pollution, contributing to food security, and increasing the productivity of agricultural crops as a result of the elimination of chemical and gas contaminants.

WETEX 2018 is in line with the vision of the UAE’s wise leadership to accommodate global trends that are shifting towards green energy, reinforcing the transformation towards a green economy. According to the annual report of the International Renewable Energy Agency, IRENA, for 2018, the increase in the proportion of direct and indirect jobs in the renewable energy sector worldwide is 5.3 percent in 2017 compared to 1.1 percent in 2016. In addition, the number of employees in the field of renewable energy, including in the hydropower sector, reached 10.3 million for the first time in 2017, compared with 9.8 million in the previous year.

With the 22.3 percent global solar capacity increase to 94 gigawatts, GW, in 2017 compared to 73 GW in 2016, the solar photovoltaic, PV, sector accounted for the strongest expansion in renewable energy jobs in 2017, with a total of about 3.4 million jobs, a nine percent increase compared to 2016, followed by biofuel at about two million jobs, wind energy at around 1.1 million jobs, and the solar heating/cooling sector at more than 800,000 jobs. The report predicts that the number of jobs in the renewable energy sector will increase from 10.3 million in 2017 to 23.6 million by 2030 and to 28.8 million by 2050, while the share of renewable energy in the global energy mix is expected to double.

“In line with our pivotal role of advancing sustainability and sustainable development in Dubai and the UAE, and in accordance with the directives of His Highness Sheikh Mohammed bin Rashid, we are working towards strengthening national efforts in the field of green energy. This is accomplished by organising WETEX 2018 on an estimated area over 78,000 square metres at the Dubai International Convention and Exhibition Centre, with the participation of about 2,100 exhibitors from 53 countries, under the theme “At the forefront of sustainability”. Green energy solutions and techniques will attract the attention of exhibitors and visitors during the exhibition, thus confirming Dubai’s leading role in highlighting the importance of green energy around the world,”said Saeed Mohammed Al Tayer, MD & CEO of DEWA.

”WETEX 2018, the largest edition since its inception 20 years ago, will be held under the umbrella of the Green Week, in conjunction with the third Dubai Solar Show, and the fifth World Green Economy Summit (WGES). It will feature leading international experts and speakers in the green economy, smart, innovation, and sustainable development fields,” Al Tayer added.

Al Tayer stressed that the third Dubai Solar Show, the region’s largest solar energy exhibition, held in conjunction with WETEX 2018, covers over an area of 14,000 square metres and follows the success of the previous edition. The Solar Show confirms the UAE’s leadership on the reliance of clean energy, green economy, and green energy, as well as on the adoption of sustainability concepts in the environmental, social, and economic aspects across the region.