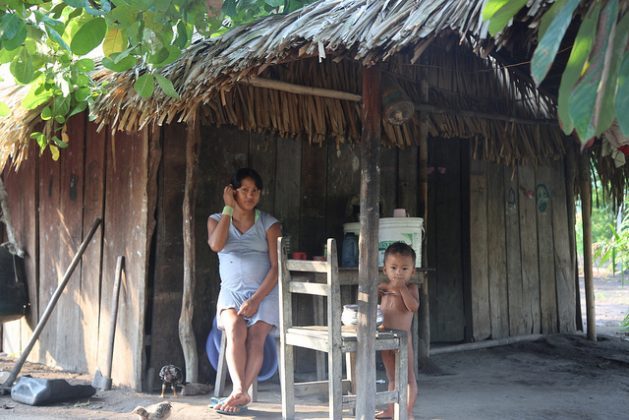 A young teenage mother, pregnant again, sits with her young child in the Sawré Muybu indigenous village in the Amazonian state of Pará in northern Brazil. Teenage pregnancy is one of the common problems facing Latin America. Credit: Fabiana Frayssinet/IPS

BUENOS AIRES, Jan 30 2019 (IPS) - The crusade against comprehensive sex education by conservative and religious sectors undermines progress in Latin America and could further drive up rates of teen pregnancy, communicable diseases and abuse against girls and adolescents.

In Brazil, where far-right President Jair Bolsonaro took office on Jan. 1, backed by the country’s neo-Petencostal churches, the crusade has high-up representatives: the minister of family, women and human rights is an evangelical pastor, Damara Alves, and the education minister is theologian Ricardo Vélez.

Already famous at the beginning of her mandate from the announcement of “a new era” in Brazilian schools, in which “boys will be dressed in blue and girls in pink,” Alves, a militant against abortion and in favor of the traditional family, said her administration would fight against “gender ideology.”

Vélez, for his part, is fighting comprehensive sex education (CSE), arguing that it “invades a private family space,” as part of Bolsonaro’s broader strategy to combat policies he describes as “Marxist garbage” in schools.

“Churches and conservative sectors created a narrative that has led to a certain collective hysteria against what they call gender ideology and school sex education that according to them foment homosexuality and transsexualism. This is a very powerful image that has infiltrated the hearts and minds of a large part of society,” Brazilian sociologist Jacqueline Pitanguy told IPS.

“The creation of narratives based on ‘fake news’ that instill fear in families, especially that of gender ideology and the supposed denial of what is masculine and feminine in schools, was an important instrument in the electoral campaign, boosting the presence of conservatives in state governments, in the legislature and in the presidency,” she added from Rio de Janeiro.

The growing influence of these forces of conservative fundamentalism was a precursor to Bolsonaro’s emergence as a contender for the presidency, said Pitanguy, of the non-governmental organisation Citizenship, Education, Research, Information and Action (Cepia).

“In the past few decades there has been an accelerated growth of neo-pentecostal evangelical churches that constitute a formidable political pressure group with a significant number of representatives in the federal and local legislatures, with a strong electoral influence since the believers follow the guidance of their pastors and bishops,” she said.

“With the support of Catholics and conservative groups in Congress, they have already succeeded in removing gender and sexual orientation from educational programmes,” she said.

Pitanguy said this “adverse scenario” will have negative effects on the sexual and reproductive health of young Brazilians, such as increased exposure to sexually transmitted diseases and teen pregnancy.

In Brazil, a country of 209 million people, one in five babies is born to a mother between the ages of 10 and 19, according to the government’s Brazilian Institute of Geography and Statistics. 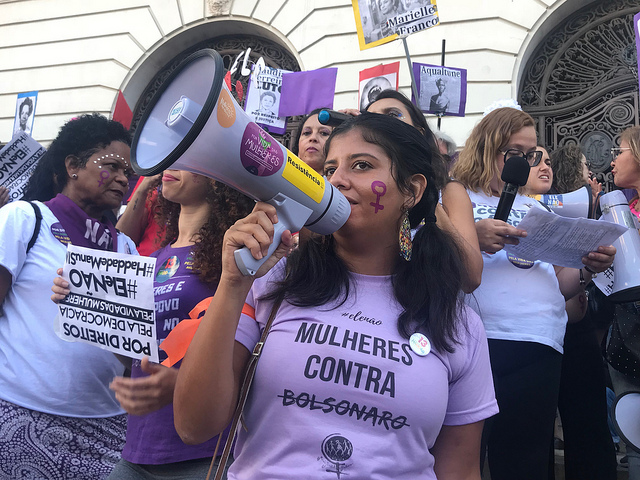 A young woman takes part in a demonstration in the city of Rio de Janeiro, wearing a T-shirt with the message: “Women against (Jair) Bolsonaro”. Women led the fight against the now president of Brazil during the election campaign, with the slogan #ÉlNo (not him). Credit: Fabiana Frayssinet/IPS

According to the Brazilian Ministry of Health, of 184,524 cases of gender violence and abuse between 2011 and 2017, 74.2 percent of the victims were girls and adolescents.

A violation of the rights of the majority, according to a December poll by the polling firm Datafolha, which revealed that 54 percent of Brazilians support CSE.

Since 2008, when the ministers of health and education of Latin America and the Caribbean signed the “Prevent with Education” declaration in Mexico, “notable advances have been identified in national legislation that promotes the incorporation of CSE in the formal education system,” said Camacho from UNFPA’s regional headquarters in Panama City.

Almost all of the countries in the region, he pointed out, have some regulations that aim to achieve this goal. Some have even incorporated CSE as public policy, including Argentina, Colombia, Cuba and Uruguay, although actual implementation has fallen short in both scope and degree, said Camacho, a gynecologist and surgeon.

In her view, the countries have shown “weaknesses” in the incorporation of CSE as public policy. “This makes these programmes generally fragile and dependent on whoever is in power. At the same time, it makes them more permeable to the influence of conservative groups,” she said.

“We are going through a difficult time in the region because of the strong presence of these groups who spread misconceptions about CSE and put pressure on governments to discourage its implementation. A number of countries that had made progress are suffering setbacks or stagnation in the development of policies and programmes,” Camacho said.

In contrast, there is now “a large body of scientific evidence on the positive impacts of CSE,” such as contributing to delaying the age of first sexual intercourse, reducing the number of sexual partners, and encouraging the use of condoms and other contraceptives, she said.

In the region, four out of every five pregnancies to mothers aged 15 to 19 are unplanned, and this drives up maternal mortality rates, according to UNFPA’s State of World Population 2018 report.

In Mexico, a country of 129 million people, there are 350,000 pregnancies to girls and adolescents every year, more than half of which are unwanted, according to the International Planned Parenthood Federation.

The country, where 23 percent of adolescent girls aged 12 to 19 are sexually active, according to official studies, has had a National Strategy for the Prevention of Teen Pregnancy since 2015, which includes CSE, and in 2016 reached 70.6 percent of students.

However, “the majority is concentrated in secondary education,” said Valeria Vasquez of EligeMexico, a network of young people for sexual and reproductive rights in a country that international organizations rank as having the highest rate of child sexual abuse in the world.

Their impacts are also unclear. “The phenomenon is complex and having achieved an integral approach is a major stride forward, but it also implies being more rigorous in its implementation and, above all, in its evaluation,” she told IPS from Mexico City.

Mexico, Latin America’s second-biggest country in terms of population and size, got a new president one month before Brazil did. But in the case of Mexico, the new leader is on the left, Andrés Manuel López Obrador, who has promised a major educational reform, which would strengthen CSE.

But Vasquez fears that the legislative alliance of the ruling party, the National Renewal Movement (MORENA), with the center-right Social Encounter Party, will hinder the president’s election campaign pledge to advance CSE and make reducing teen pregnancy one of the top priorities.

“The biggest worry is the ambiguity of their positions on these issues,” with answers such as “it will be put up for consultation” with the new officials, she said, in a country where the Catholic Church has imposed serious conservative setbacks in issues such as the right to abortion.

But one positive thing, in her view, is that “more and more spaces are opening up for discussion on these issues. Either because of pressure from organized civil society, or because of the arrival of people in these spaces with ideas similar to those of people who are involved in social struggles,” said Vasquez.

For Pitanguy, in the case of Brazil, “there was a delay and inefficiency on the part of progressive sectors in responding to this conservative onslaught” and in fighting against the new “narrative on morals and customs” in a country governed by the leftist Workers’ Party between 2003 and 2016.

It is necessary to “consider the complexity of this socio-political and cultural situation and expand efforts to defend the spaces gained by CSE,” renovating, among other things, advocacy and communication strategies and rethinking alliances, concluded Camacho, the regional expert.