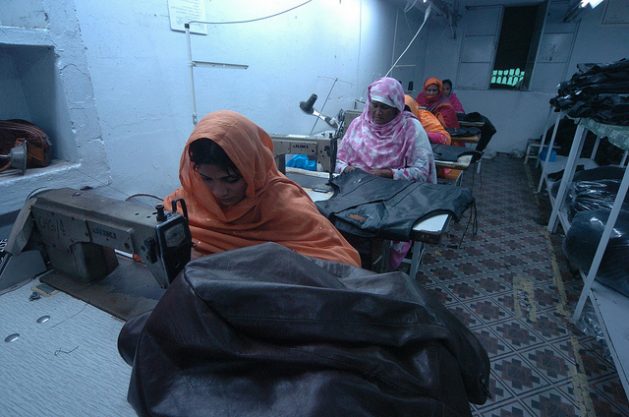 UNITED NATIONS, Feb 15 2019 (IPS) - The global #MeToo movement has put a spotlight on sexual harassment and violence in various industries including the film and music industries. Is it now time for the fashion industry to address these issues within their supply chains, one organisation says.

Coinciding with the Organisation for Economic Cooperation and Development (OECD) Forum on Due Diligence in the Garment and Footwear Sector, Human Rights Watch (HRW) launched a report detailing cases of sexual harassment in garment factors and urging apparel companies to address the issue head on.

“Women shouldn’t have to choose between dignity and jobs, and the constant struggle to keep a job and put food on the plate means women often feel compelled to swallow their dignity and normalise sexual harassment at work,” Aruna Kashyap from HRW’s Women’s Rights Division told IPS.

Around the world, millions of women are employed by the 2.4 trillion-dollar apparel industry. But because of their sex, they face numerous challenges including sexual and verbal harassment.

Roja, a 30-year-old factory worker in a India, told HRW that her supervisor stalked and called her asking for sexual favours. When Roja filed a complaint, the factory’s administration told her that such harassment was “normal.”

In Pakistan, women received threats that they would be fired after complaining to human resources about cases of sexual harassment.

In the same factory, managers also threatened to transfer workers who refused overtime work to divisions with more men where the risk of harassment was even higher.

HRW noted that verbal abuse is also common across countries.

For example, in Myanmar, managers verbally abused women after they asked for clean toilets especially when they were menstruating while supervisors in India asked inappropriate questions about workers’ sex lives when they asked for breaks to relieve their menstrual cramps.

Others are too afraid to file formal complaints, including a group of 11 women workers from a southern Indian factory who wrote to a local union, stating: “We have to hear unbearable abuses at work…we are tired of hearing these kinds of abuses…we have come here to the city from another place to earn money. We too have self-respect and dignity…we want justice, is it our fault that we are poor?”

While countries such as India and Pakistan do have laws around sexual harassment at work, they are often poorly enforced.

Additionally, 59 countries do not have specific legal remedies for sexual harassment in employment.

In the absence of regulation, companies conduct social audits in order to monitor conditions in factories. However, such audits often fail to adequately address and report cases of sexual harassment.

For instance, auditors reportedly conducted a combination of group and individual interviews on-site. By conducting interviews on-site, workers do not have full confidentiality and as workers are generally randomly selected for interviews, management knows or can find out who is participating.

Additionally, of the 50 audit reports analysed, HRW found that a majority did not note any abuse.

“Companies that rely on social audits to fix sexual harassment are exposing their own ignorance of the limitations of these audit tools and the range of measures needed to address the problems,” Kashyap said.

She highlighted the need for companies to design specialised programs with the participation of women workers and to “look inwards and correct their own practices.”

For instance, Kashyap pointed to the higher incidence of verbal abuse during peak seasons. Brands should therefore look into their purchasing practices in order to ensure they do not contribute to such abuses in their factories.

HRW has also been behind a global push for a new binding International Labour Organisation (ILO) treaty to prevent and response to harassment and violence at work.

“If there is binding ILO Convention on violence and harassment at work, governments will have to develop law and bolster their implementation of it, there will be more clearly defined responsibilities vis-a-vis governments and employers, with more government resources dedicated to developing and enforcing such laws than what currently exists today,” Kashyap said.

She noted the benefits for both workers and companies, and urged corporations to help lead the charge on the new initiative which is expected to come to fruition during the ILO Conference in June.

“Apparel companies should be doing a lot more to address the problems…the human rights due diligence burden on companies is higher in the absence of legislation,” Kashyap said.