Justine Masika Bihamba is founder of Synergie des Femmes, a front line women’s organization based in the Democratic Republic of Congo (DRC), and local partner of Donor Direct Action. 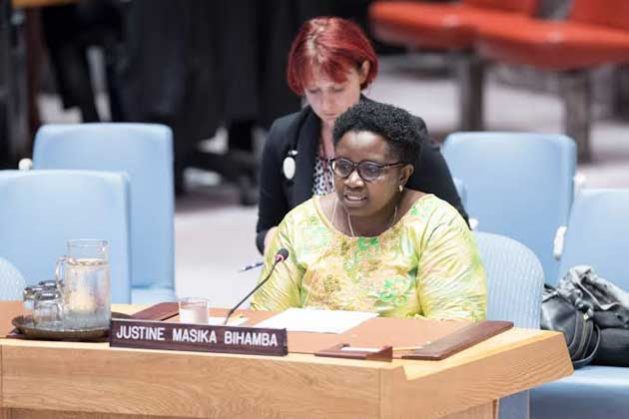 Justine Masika Bihamba at the UN Security Council in 2018.

GOMA, DR Congo, Feb 21 2019 (IPS) - When Felix Tshisekedi, the 55 year old son of the former opposition leader, won the recent presidential election in the Democratic Republic of Congo, it should have felt like a new dawn for many of us living here.

This was nothing less than a monumental event – the first time since our country’s independence that a peaceful transition of power took place between an outgoing and an incoming president.

I was born in the city of Goma in the Eastern DRC, close to the border with Rwanda. I set up Synergie des Femmes, an organization that gives a lifeline to Congolese victims of sexual violence.

I have spent over 30 years doing my best to improve the lives of women in extremely challenging circumstances and to ensure that women can be part of a fair and transparent political process.

In the last couple of years, I have also co-ordinated the Congolese Women’s Forum, a network of 65 women from across the country, who are calling for women to be part of politics and peace-building in this country.

Despite its relatively peaceful passing, I have many concerns surrounding the recent elections. Tshisekedi’s political experience appears to be limited to being the son of a politician from a party that has languished in opposition for several decades.

Rumors are that the previous president, Joseph Kabila, made some sort of unofficial back room deal with him, which would ensure political benefits for both. It would not surprise me if this turned out to be true.

This is the type of political wrangling that Congolese people have become all too familiar with. Kabila has always played the political game – including when it causes harm to our citizens – and women in particular.

Informal political agreements by a small circle of men behind closed doors have tended to not only exclude women from the political process, but also perpetuate harm against us. This time again, when political capital was at stake, women were sacrificed.

We have demanded to be part of the political process – to have our voices heard and included – but we have nowhere near equal representation. Out of 535 parliamentarians in the National Assembly there are only 50 women.

Considering the obstacles we have had to face to even take part, this could have been even worse. The discriminatory electoral law meant that anyone proposing themselves as a candidate needs to come up with a deposit of $1,000.

This is simply impossible in our country where men can use their political networks to raise funding and trade “favors”, where women do not have the same political capital. They do not tend to have much control over their own finances either.

This December, the voting process was fraught with difficulty. The Electoral Commission ignored the fact that many people in the DRC – women in particular – are illiterate and had no idea how to use the electronic voting machines that were shipped in for the event.

These machines were sometimes moved at the last minute and breakdowns were common. No funding was given towards educating voters in advance.

Electoral lists also posed a problem on voting day. Even some of those who could read were not able to find their names, which were sometimes categorized in a confusing way – and regularly included people from the wrong constituencies, so some voters simply did not know where to go.

Delays in opening certain polling stations affected things too. In a handful of areas it was not possible to vote at all. Voter turnout was directly affected by this and many chose to stay at home, after hearing about the challenges. From what I have seen, once again, this disproportionately affected women.

Congolese women have faced decades of being victims of sexual violence in conflict, where rape was regularly used as a weapon of war. What has happened to women here has often caused outrage for a few moments and is then quickly forgotten about.

The best solution to this is ensuring that women – the most negatively affected by the status quo – are active decision makers in government.

Those of us who speak out publicly about this live with constant worry. My own home and office have been attacked because I spoke out. I am forced to continue doing so even though I am at risk every single day. I have had dozens of threats to my life, but I am not giving up.

Women have been left out of this latest political transition, but there is a lot that we have learned too. The first peaceful transition in politics in our country has shown the Congolese Women’s Forum that maybe one day we can peacefully achieve equal representation, where we are finally listened to, and where we are able to make decisions on our own futures.