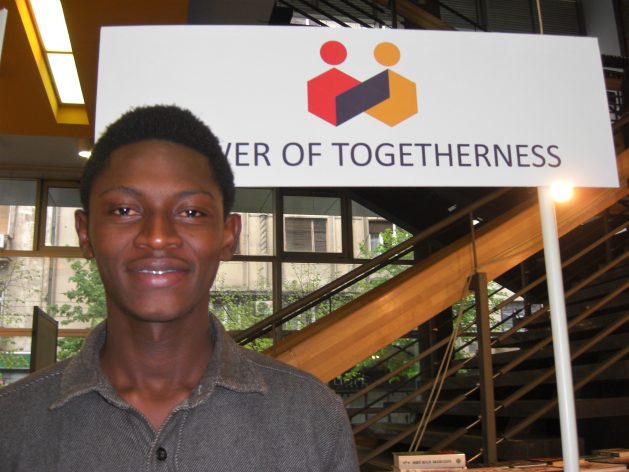 Youth activist Abraham M. Keita is the founder of the Liberia-based Giving Hope to Children Foundation and is among a growing movement of youth activists who are fighting for the defence of civil liberties and demanding that government act on important issues. Credit: A D McKenzie/IPS

BELGRADE, Apr 15 2019 (IPS) - Abraham M. Keita says he was nine years old when a girl of thirteen was sexually assaulted and strangled in his home community in Liberia.

The anger, outrage and sadness he felt would lead him to start advocating for children’s rights – participating in marches, organising protests and going up against the powerful, in a country where sexual abuse of children is among the worst in the world, according to United Nations figures.

Keita will turn 20 years old later this month, and he says he has already spent half of his life as an activist for change.

“I’ve been marching since I was 10,” he told IPS with a quiet smile.

A tall, slim young man, with a thoughtful air, Keita was among the strong representation of youth activists at the annual International Civil Society Week (ICSW) meeting, held this year in Belgrade Apr. 8-12.

Co-hosted by the Johannesburg-based global civil society alliance CIVICUS and Serbian association Civic Initiatives, the event brought together more than 850 delegates from around the world. Keita and other activists, such as 17-year-old Gabriel dos Santos of Brazil, were invited by the organisers to join the discussion on how to build movements for change.

Keita, the 2015 winner of the International Children’s Peace Prize (an annual award from the Amsterdam-based KidsRight Foundation to a child who “fights courageously for children’s rights” – winners include Nobel Prize laureate Malala Yousafzai), is also the founder of the Liberia-based Giving Hope to Children Foundation.

He is among a growing movement of youth activists who are fighting for the defence of civil liberties and demanding that government act on important issues such as protecting children from violence, ensuring sustainable development, and reducing global warming, according to ICSW organisers.

“The youth engagement in ICSW in general is always extremely important to achieve the creation of partnerships among diverse groups and to continue raising awareness of the contributions young people offer to civil society spaces,” said Elisa Novoa, CIVICUS’ youth engagement coordinator.

During the event, youth activists sent out a message calling for civil society to “open up the space” to diverse groups.

“Civil society should understand the importance of sharing power and enabling inclusion in a meaningful and uplifting manner,” their statement said. “We as young people of diversity acknowledge and recognise the importance of having voices of vulnerability at the forefront of change. We need to redefine how we provide solutions and build togetherness.”

Activists also requested trust from donors, encouraging sponsors to be bold in funding organisations that are truly youth led.

For many such groups, a central theme is protecting the vulnerable, a position that Keita has taken. He told IPS that he grew up among vulnerable children, living in poverty in a slum in the Liberian capital Monrovia with his mother and siblings – his father was killed before he was five years old, during Liberia’s brutal and long-lasting civil war.

Different sides in the conflict used children as child soldiers and sexually abused many of them, as reports by the UN and other organisations have shown. That legacy continues, with a high number of girls and women being assaulted, while most of the rapists go unpunished.

According to Liberian government figures, from January to September 2018, nearly 900 sexual and gender-based cases of violence were reported, including 500 rape cases of which 475 involved children.

The statistics provide “alarming evidence that we are still not dealing with this problem in an effective manner”, said Liberia’s President George Weah last October, as quoted in local media.

“Hundreds of cases are still in the courts, and the perpetrators are roaming freely,” he said.
The problem is rooted in all levels of society and includes civil society as well as government representatives, with individuals responsible for protecting children being charged with sexual abuses.

In 2017, a Liberian lawmaker allegedly raped a 13-year-old girl, making her pregnant. Keita organised protests against the powerful individual and was himself arrested and charged with “criminal coercion”, he said.

These charges were eventually dropped. The lawmaker meanwhile appeared in court, spent two days in jail, and since 2017, activists have not been able to locate the girl or her family, Keita told IPS. He and other advocates are still pushing for prosecution of the case, even if that may lead to their own detention, he added.

Arrests and smears are among the official tactics used to suppress youth advocates, similar to those used against human rights defenders in general, said ICSW delegates. Members of the public, too, sometimes think that youth activists are misguided and can tend to dismiss their work.

But as youth around the world join forces, their campaigns for rights and environmental action are becoming a growing force.

In Belgrade, youth volunteers assisted with the organisation of ICSW, including being monitors for the closing event – a symbolic “run for freedom” around the meeting’s venue, through a few of the city’s streets, as part of new initiative Freedom Runner.

Dušanka, a 20-year-old Serbian university student studying international affairs and political science, told IPS she had volunteered because she intended to work in civil society, was interested in diversity and wished to make a difference.

“I want to help all people,” she said. “People are different but we’re all equal. That’s a message to the world.”

Along with their idealism, youth activists are aware of the risks they run. Keita told IPS that he sometimes felt a “little afraid”, and that his mother and family members worry too.

“But whatever happens to me, I want to act so things will change, [and] not continue being the same,” he said.