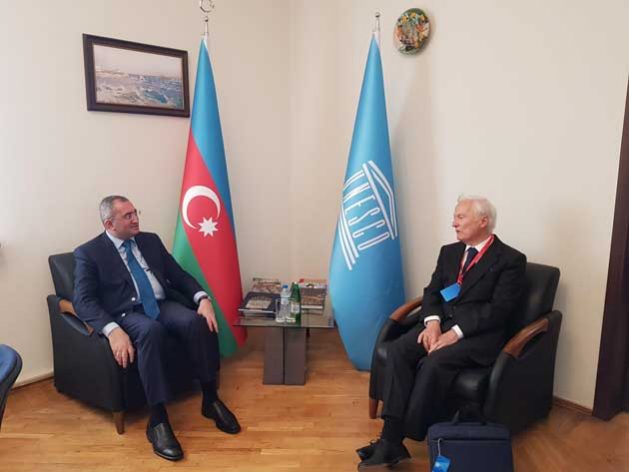 The aim of these meetings was to enhance the Centre’s collaboration with civil society organizations and national human rights commissions in Azerbaijan in the field of interfaith dialogue and the promotion of mutual understanding and cooperative relations between societies in the Global North and the Global South.

In the meeting with the Executive Secretary of the National Commission for UNESCO, Ambassador Elnur Sultanov, Ambassador Jazairy informed the latter about the outcome of the 25 June 2018 World Conference on religions and equal citizenship rights.

Ambassador Jazairy mentioned that the World Conference was inspired by the endeavours of the President of the Republic of Azerbaijan HE Ilham Aliyev to initiatie the Baku Process that aims to enhance mutual understanding and respect between individuals and groups with different ethnic, cultural, religious and linguistic backgrounds.

The World Conference – they said – had been a timely opportunity to promote intercultural and inter-faith dialogue among international experts, opinion makers, religious, lay and government leaders in times when religion has been considered as a source of division.

In light of this discussion, the participants highlighted the need to capitalize on the momentum of the World Conference and to examine inventive ways to carry the process forward to harness the collective energy of religions, creeds and value systems in the pursuit of equal citizenship rights.

The participants agreed that with the rise of populism in advanced societies and violent extremism in the MENA region, the promotion of religious tolerance and peaceful cooperation between world societies is needed more than ever. In this connection, Ambassador Sultanov cited the Constitution of UNESCO which says: “since wars begin in the minds of men, it is in the minds of men that the defences of peace must be constructed.”

In this connection, both parties agreed to pursue joint activities to enhance inter-faith dialogue and inter-cultural understanding through the holding of conferences at the United Nations Office in Geneva and in Azerbaijan. Ambassador Sultanov and Ambassador Jazairy likewise expressed their readiness to conduct joint research studies on religious tolerance and multiculturalism in Europe.

Addressing the surge of Islamophobia in Europe

In a second meeting held in Baku, Ambassador Jazairy was welcomed by the Chairman of the State Committee on Religious Associations Mr Mubariz Gurbanli. Ambassador Jazairy used the opportunity to inform Mr Gurbanli about the endeavours of the Centre to promote and enhance the protection of human rights in the Arab region.

Both parties agreed that the rise of Islamophobia has given rise to anti-Muslim and anti-Arab sentiments in advanced societies in the West. Mr Gurbanli highlighted that the State Committee on Religious Associations had organized several high-level inter-faith meetings, similar to that of the 25 June World Conference, in Finland, Germany and Sweden between religious leaders of Islam, Christianity and Judaism.

The outcome of these meetings, Mr Gurbanli, highlighted, had enabled religious bodies of these faiths to come together so as to build understanding and harmony as well as to address issues related to Islamophobia, Christianophobia and anti-Semitism that prevail in societies whether in Europe or in the Middle East.

In this relation, Ambassador Jazairy used the opportunity to present the 10-point World Conference Outcome Declaration on “Moving Towards Greater Spiritual Convergence Worldwide in Support of Equal Citizenship Rights” and the latter’s follow-up actions.

The said declaration, Ambassador Jazairy, appeals to decision makers to harness the collective energy of religions, creeds and value systems in the pursuit of equal citizenship rights. The Geneva Centre’s Executive Director mentioned that there is 90% convergence between faiths and 10% specificity. In the current context, media and decision makers tend to focus on the 10% that divides societies which have given rise to a toxic narrative about the other.

To reverse this ominous trend, Ambassador Jazairy mentioned the importance of promoting equal citizenship rights so as to avoid that social segments of society fall back on sub-identities to achieve their human rights. The Geneva Centre’s Executive Director also noted that secularity includes diversity while secularism works to exclude faith-based groups.

In light of this discussion, both parties agreed to organize joint conferences on inter-faith dialogue in the future and to conduct further research on points of commonalities of religions, creeds and value systems in the pursuit of joint values. Mr Gurbanli used the occasion to invite Ambassador Jazairy to participate in a major inter-religious forum in Vienna in June this year.

Signing of MoU with the International Eurasia Press Fund

In the presence of national MPs of the Parliament of Azerbaijan, members of national human rights commissions, diplomatic community, civil society organizations and media representatives, the Geneva Centre signed an MoU with the International Eurasia Press Fund.

The MoU lays the foundation for a collaborative partnership between both organizations in the holding of joint panel debates at the United Nations Office in Geneva on issues related to global governance, the promotion of human rights of IDPs as well as the promotion of cooperative relations between people and societies.

The agreement also commits the parties to arrange and organize joint training programmes in relation to the promotion of human rights, peace and sustainable development in the Middle East and North Africa (MENA) region as well as in Azerbaijan.

During the meeting, the President of the International Eurasia Press Fund Mr Umud Mirzayev expressed his appreciation for the endeavours of the Centre to promote a value driven human rights system.

The Charge d’Affaires at the Embassy of the Swiss Confederation in Azerbaijan Ms Simone Haeberli likewise praised the endeavours of the Centre to promote inter-cultural understanding around the world and stated that she was proud that Switzerland had hosted the 25 June World Conference on religions and equal citizenship rights.

During a meeting with the Chairman of the Italian Islamic Religious Community Mr Yahya Pallavicini, and the Executive Director of the Geneva Centre, the parties expressed their commitment to pursue joint activities to promote inter-religious understanding in Europe between faith leaders and religious followers at grassroot level.

Mr Pallavicini mentioned he had taken note of the outcome of the World Conference and its Outcome Declaration and used the opportunity to invite Ambassador Jazairy to present the ten-point declaration during a public hearing at the Italian Parliament.

The Geneva Centre’s Executive Director accepted this proposal and expressed his readiness to meet with the President of the Italian Islamic Religious Community. Both parties agreed to sign a partnership agreement to formalize their cooperation in the near future. 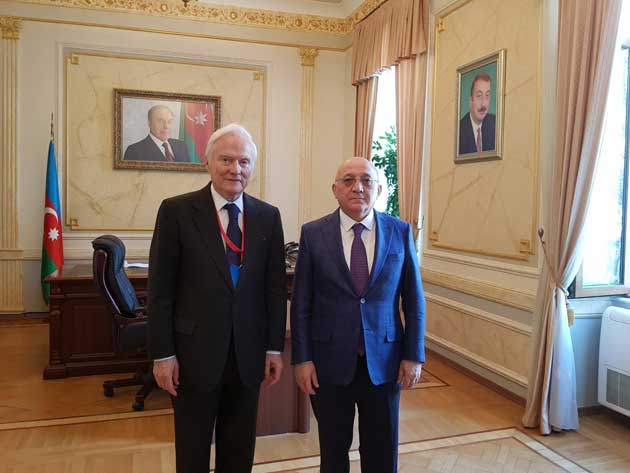 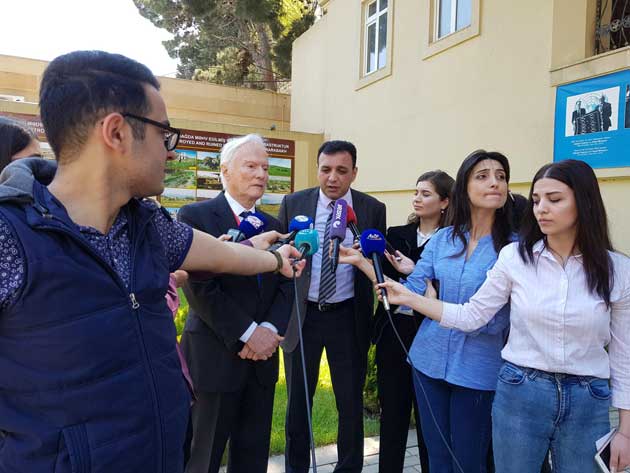 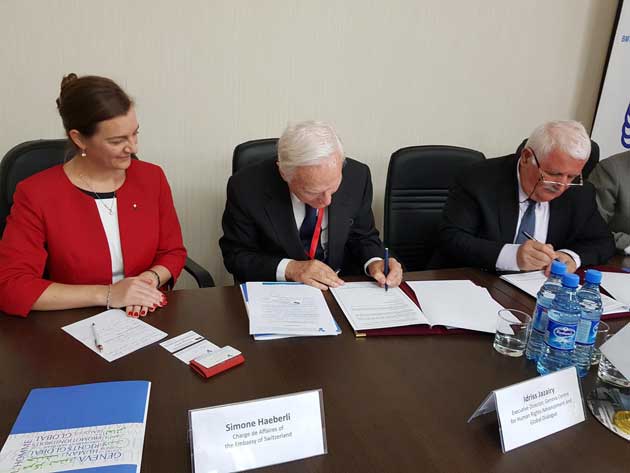 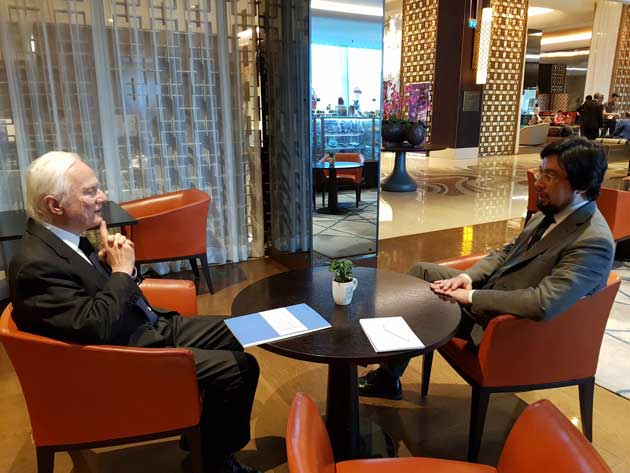