LONDON, Aug 29 2019 (IPS) - It must be a daunting prospect to sing songs made famous by the incomparable Nina Simone, but performers Ledisi and Lisa Fischer brought their individual style to a BBC Proms concert in London, honouring Simone and gaining admiration for their own talent. 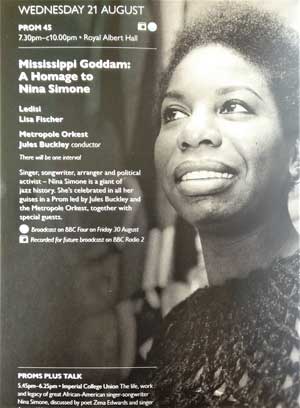 The show, “Mississippi Goddam: A Homage to Nina Simone”, paid tribute to the singer, pianist and civil rights campaigner – a “towering musical figure” – at the Royal Albert Hall on Aug. 21, more than 16 years after Simone died in her sleep in southern France at the age of 70.

This was a celebration to recognise her “unique contribution to music history”, according to the Proms, an annual summer festival of classical music that also features genres “outside the traditional classical repertoire”.

The concert’s title refers to the song that marked a turning point in Simone’s career, when she composed it in fury and grief following the murder of civil rights activist Medgar Evers in Jackson, Mississippi, and the deaths of four African-American girls in the bombing of the 16th Street Baptist Church in Birmingham, Alabama, in 1963.

Performing the song at the tribute, New Orleans-born vocalist Ledisi held nothing back. She put all the anger and anguish that the lyrics required into her rendition, creating one of the high points of the concert.

The composition stood out particularly because of the contrast between the lyrics and the rhythm, and Ledisi – who’s also an actress and writer – emphasized this disparity. While the “tune has an almost fun-filled, pulsating vibe” (as conductor Jules Buckley put it in his written introduction to the show), the message itself is uncompromising.

“It speaks of murder, of dashed dreams and severe inequality, and it shattered the assumption that African-Americans would patiently use the legislative process to seek political rights,” Buckley wrote. Listeners got the full context, and they were reminded that some things have not changed much in the United States.

Conducting the Metropole Orkest, whose members played superbly, Buckley said that in putting together the programme he wanted to shine a light not only on Simone’s hits but also on a “few genius and lesser-known songs”. With the sold-out concert, he and the performers succeeded in providing the audience a clear idea of the range of Simone’s oeuvre.

The concert began with an instrumental version of “African Mailman” and segued into “Sinnerman”, the soulful track about the “wrongdoer who unsuccessfully seeks shelter from a rock, the river and the sea, and ultimately makes a direct appeal to God”, to quote Alyn Shipman, the author of A New History of Jazz who compiled the programme notes.

The orchestral introduction paved the way for Lisa Fischer’s arresting entrance. With her shaved head and flowing black outfit, she moved across the stage, singing “Plain Gold Ring” in her inimitable voice, evoking the image of an operatic monk. The two-time Grammy winner displayed the genre-crossing versatility for which she has become known, using her voice like a musical instrument and hitting unexpected lows before again going high. The audience loved it.

Fischer introduced Ledisi, who wore a scarlet gown (before changing to an African dress after the intermission), and the two women then took turns singing Simone’s repertoire, expressing love for the icon as well as appreciation for each other’s performances.

They both kept topping their previous song, and the temperature rose with “I Put a Spell on You” (Ledisi), “Don’t Let Me Be Misunderstood” (Fischer), “Ne me quitte pas” (poignantly rendered by Ledisi) and “I Loves You, Porgy” (memorably delivered by Fischer).

Then there was, of course, “Mississippi Goddam”, which followed a haunting, syncopated “Dambala”, a song made famous by Bahamian musician Tony McKay aka Exuma, who inspired Simone. Fischer performed “Dambala” with the requisite mysticism, getting listeners to shake to the beat.

Back-up vocalists LaSharVu, comprising three powerhouse singers, also contributed to the energy and success of the concert. Two of them joined Ledisi and Fischer for an outstanding and moving presentation of “Four Women” – Simone’s 1966 song about the lives of four African-American women that has become an essential part of her artistic legacy.

For other songs, LaSharVu teamed up with the orchestra to provide “percussive accompaniment” through clapping, and the orchestra’s skill on moving from reggae (“Baltimore”) to gospel underpinned the overall triumph of the show.

The concert ended with an encore, as Fischer and Ledisi performed “Feeling Good” to a standing ovation, and to comments of “fantastic”, “fabulous”, “amazing” and other superlatives.

The show was not the only part of the homage to Simone. Earlier in the day, the BBC’s “Proms Plus Talk” programme had featured a discussion of the “life, work and legacy” of the singer, with poet Zena Edwards and singer-musician Ayanna Witter-Johnson interviewed by journalist Kevin Le Gendre, author of Don’t Stop The Carnival: Black Music In Britain.

During this free public event, held at Imperial College Union, the three spoke of the impact Simone has had on their work and recalled her style and performances. They also discussed the abuse she suffered from her second husband and the painful relationship she had with her only daughter, Lisa, whom Simone in turn physically abused.

Witter-Johnson said that Simone had inspired her to feel empowered in performing different genres, so that she could sing and play music across various styles. “Her courage, outstanding musicianship and love of her heritage will always be a continual source of inspiration,” she said later.

In response to a comment from an audience member, a publisher, that Simone had been an extremely “difficult” person, Edwards stressed that Simone had been a “genius” and could be expected to not have an easy personality. Le Gendre meanwhile pointed to the difficulties Simone herself had experienced, with relationships, record companies, and the American establishment, especially after she began defending civil rights.

In an email interview after the tribute, Le Gendre said Simone’s music had had a “profound effect” on him throughout his life.

“There are so many anthems that she recorded it is difficult to know where to start, but a song like ‘Four Women’ can still move me to tears because it is such an unflinchingly honest depiction of the black condition that African-Americans, African-Caribbeans and black Britons can easily relate to,” he said.

“The way she broaches the very real historical issues of rape on a plantation, girls forced into prostitution and the internal battles based on skin shade affected me a great deal because, having lived in the West Indies and the UK and visited America several times, I know that what she is talking about is simply the truth,” he added.

“There is a war within the race as well as between the races, and we will only move beyond self-destruction if we firstly recognise these painful facts. I continue to be inspired by her ability to ‘keep it real’ as well as her great musicianship. Above all else she has made me think, as well as listen and dance.”