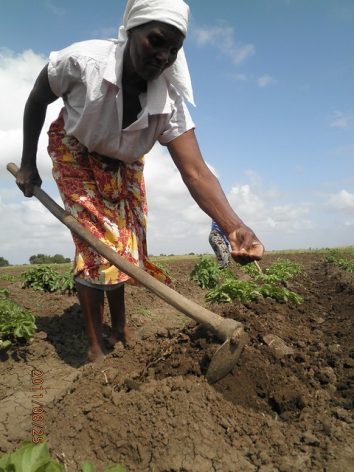 Female subsistence farmers, who according to the Alliance for a Green Revolution in Africa form more than 70 percent of farmers in Africa. Last week USAID announced $70 million of investment into research for new seeds and methods to reduce the impact of droughts and disease on crops across the developing world. Credit: Busani Bafana/IPS

At the gathering of nutritionists in the 2019 Borlaug Dialogue International Symposium, held annually in Des Moines, Iowa, in the United States, hopes were pinned on a new generation of so-called ‘agro-entrepreneurs’ in Africa.

At the event, USAID administrator Mark Green announced $70 million of investment into research for new seeds and methods to reduce the impact of droughts and disease on crops across the developing world.

“Humanitarian assistance, including food assistance, is treatment, not cure,” said Green. “We must develop new technologies and partnerships that will not only assist displaced families in crisis settings, but offer them livelihood opportunities wherever they can find them.”

Jennifer Blanke, vice president for agriculture human and social development at the African Development Bank (AfDB) said Africa “missed out” on the green revolution that bumped up harvests across Asia and Latin America in the 1950s and 1960s.

But with new technologies — from unmanned “drone” aircraft to new strains of more resilient crop seeds — coming online, African farmers and policymakers have an opportunity to get agriculture back on track and boost harvests.

“You can do so many things with technology,” said Blanke.

“With drones, you can survey your fields in a minute, which would have taken hours and hours previously. You can spray pesticides. Satellite technology allows you to see what’s happening to weather systems. Basic mobile technology helps farmers in rural areas know what prices they can get for their food.”

In the coming months, Blanke aims to bring together researchers, policymakers and investors to foster helpful policies and roll out schemes to buy and spread technology as well as training farmers and officials how to use it.

They included Ifeoluwa Olatayo, from Nigeria, who was awarded a fellowship from the World Hunger Fighters Foundation, for building small hydroponic farms on rooftops in Ibadan, in Oyo State, for growing lettuce, cucumbers and other vegetables

“Since we’re planting in close proximity to consumers, we’re able to create fast and easy access to nutritious foods while at the same time lessening the impact of transportation on the whole agricultural value chain,” said Olatayo.

“It’s important that people have access to nutritious foods, as affordable and as fresh as possible.”

Other agro-entrepreneurs are tackling another problem for African farmers — the fact that, thanks to bad roads, poor transport and other woes, entire harvests rot beside the fields they were grown in and never reach market.

Other start-ups involve distributing new varieties of seeds that are more resilient to insects and disease, yield bigger harvests, provide more nutrients, and in some cases taste better than the crops they are replacing.

Lourena Arone Maxwell, from Mozambique, which has been ravaged by disease and droughts since cyclones Idai and Kenneth killed more than 600 people earlier this year, is focussed on fighting crop diseases.

“Plant diseases can reduce the amount of food that farmers have and the solution is a very affordable and environmentally-friendly method to control them,” Maxwell said on the sidelines of an event to honour the first batch of fellows.