The Superfoods of the Andes and the Himalaya 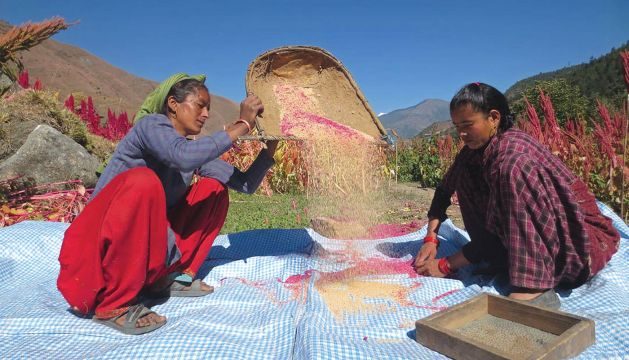 KATHMANDU, Oct 9 2019 (IPS) - The nutritious grain that mountain peoples of the Americas and high Asia cultivated were displaced by wheat and rice, but they are staging a comeback thanks to growing public consciousness about health.

Food items like pickled potato, roasted corn, tomato in curry and chilli paste are as Nepali as you can get. But few here know that these staples of our food heritage have their roots in the Andes, and were actually brought to Europe and Asia only in the last 500 years.

Just like the Andes, the Himalaya has its own superfoods like chino (Proso millet) and kaguno (Foxtail millet) which have similar nutritional value to quinoa, but very few know of their existence

Now, there is growing demand for other lost crops of the Incas like amaranth and quinoa among urban Nepalis. These grains are high in protein, low in carbohydrates, gluten-free and rich in micronutrients and minerals.

In fact, amaranth and quinoa are healthier alternatives to rice, particularly for diabetes and hypertension patients. Another South American fruit, the gooseberry, is much sought after for its fibrous and antioxidant properties.

“We might cater to a limited market, but there is a growing demand for superfoods. In fact more and more of our customers prefer to eat quinoa instead of rice,” said Roseeta Raymajhi of Fresh Shelf and Beverage in Baluwatar that has been supplying quinoa for two years.

The Incas grew a variety of crops and vegetables, exotic fruits, beans and tubers. But with the Spanish conquests, native crops were replaced with European foods and many were lost. However with better understanding of their nutritional value, some of the lost crops of the Inca are being rediscovered.

Amaranth is now also cultivated in Nepal’s Jumla and Humla districts, where the arid mountains have a similar soil and climate to the Andes. Iron-rich amaranth leaves (latta ko sag) are eaten as a vegetable, and larger-scale amaranth cultivation in Doti and Achham districts cater to a rising demand in India.

“Many mountain crops like amaranth had been neglected but these are climate smart superfoods and that is where the future is,” explained Rita Gurung of LI-BIRD, the Pokhara-based agro-biodiversity research organisation.

She says the crops need commercial-scale production and an campaign to promote their nutritional value by recipe generation so that Nepalis will make them a regular part of their diet.

Just like the Andes, the Himalaya has its own superfoods like chino (Proso millet) and kaguno (Foxtail millet) which have similar nutritional value to quinoa, but very few know of their existence.

“We have so many highly nutritional foods, but we have abandoned them for processed and packaged foodstuff and vitamin capsules,” laments public health expert Aruna Uprety.

It has been over four years since Saurav Dhakal started Green Growth, an online shopping portal for organic produce in Kathmandu. He has seen gradual increase in demand for locally grown organic and nutrient rich produce, but says farmers have to be first convinced that there is a market for them.

“There are traditional recipes to all of our indigenous foods that we have to relearn and propagate,” Dhakal says.

This Dasain, let us replace rice with kodo (millet), phapar (buckwheat), jau (barley), til (sesame), aalas (flax seed) so that when we eat, drink and make merry, we also become healthier.