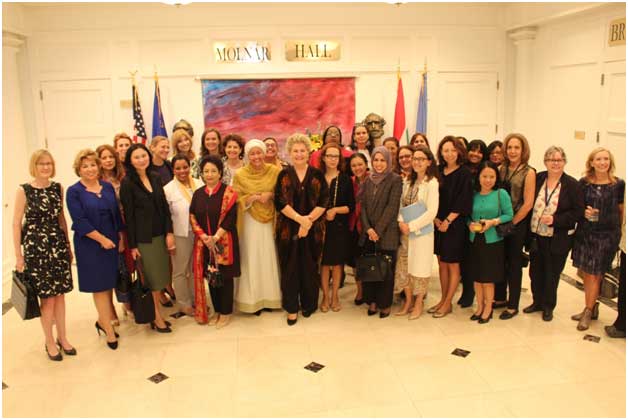 UNITED NATIONS, Oct 8 2019 (IPS) - New York’s diplomatic community has continued to be enriched by a record number of women Permanent Representatives (PRUNs)—50 in all, as of October 2 – compared with about 15 to 20 back in the 1980s and early 1990s.

But the history-making number is still short of gender parity, falling far behind the 140 men who are PRUNs in the 193-member General Assembly, the highest policy-making body at the United Nations.

The remaining three women are designated Charge d’Affaires ad interim or acting heads of their respective diplomatic missions – and don’t hold the rank of PRUN.

The 50 PRUNs, who are also designated as Ambassadors, are members of an exclusive association called the “Circle of Women Ambassadors”— even as the circle has steadily kept widening.

The only other glass-shattering UN event took place in September 2014 when six of the 15 members of the UN Security Council– long monopolized by men– were women.

“It’s a little strange that it’s taken us this long,” Ambassador Sylvie Lucas of Luxembourg, was quoted as saying, more than five years ago.

UN Secretary-General Antonio Guterres told delegates last week that “no country in the world is on track to attain gender equality by 2030, and women continue to be hampered by discriminatory laws, unequal access to opportunities and protections, high levels of violence, and damaging norms and attitudes.”

So, gender parity among men and women ambassadors may be a long way off.

Ambassador Anwarul K. Chowdhury, former Permanent Representative of Bangladesh, and a one-time UN Under-Secretary-General told IPS: “To me any progress which manifests equality and representation of women’s recognized engagement is welcome.”

The fact that, at the moment, the number of women Permanent Representatives to the UN at its headquarters has reached the highest point ever is a development worthy of our attention, he said.

“However, we have a long way to go even to reach the numerical equality among 193 Member States”, said Ambassador Chowdhury, the initiator of UN Security Council Resolution (UNSCR) 1325 as President of the Security Council in March 2000: a resolution that underlined the important role of women in the prevention and resolution of conflicts, and on peace negotiations and peace-building.

“In this context, I recall the Call to Action by civil society (which I proudly co-signed) for the world leaders on 25 September 2013 as they converged in New York for the General Assembly’s high level meetings urging them to take action for equality of women’s participation at all decision-making levels in four areas”, he added.

4. Appointment by Member-states of More Women as Ambassadors to the UN in New York and Geneva. [reality: overwhelmingly underrepresented by women]

On all four points, the UN community needs to do much more to call it history-making, said Ambassador Chowdhury.

Kshenuka Senewiratne, Sri Lanka’s trailblazing ambassador– her country’s first female permanent representative (PRUN) in over 63 years– told IPS that gender empowerment has continued to advance in her home country, even as women outnumber men in many walks of life, and particularly in higher education.

She said this is also reflected in the Sri Lankan foreign service where women have dominated over men in open competitive exams.

“And it is possible the same trends continue in many developing nations— even as the UN tries to advance its 2030 Development Agenda where gender empowerment remains one of the priorities.”

But still, “I have yet to hear my colleagues here say that it was a concerted gesture of gender balance that they got posted to New York,” she declared.

Barbara Crossette, a former UN Bureau Chief for the New York Times, told IPS: “My initial thought is that this phenomenon of more powerful women in diplomacy is not unlike women rising on their own in politics and not just by inheriting leadership as widows, daughters or other kin of men, such as Indira Gandhi, Sirimavo Bandaranaike, Benazir Bhutto, Chandrika Kumaratunga or Cristina Fernández de Kirchner”.

She pointed out there are now more Angela Merkels, Michelle Bachelets or Elizabeth Warrens, to name only a few.

“Women are also rising in international agencies and civil society organizations, gaining expertise in global affairs, geopolitics and armed conflict, often in uniform and wearing a peacekeeper’s beret”, said Crossette, the senior consulting editor and writer for PassBlue and the United Nations correspondent for The Nation.

Asked whether more female diplomats will aid the cause of greater gender equality, she said: “ I would say, not necessarily, unless the Secretariat and missions in the field come down harder on denigrators and abusers of women. And, as Louise Frechette (a former UN deputy Secretary-General) told me in an interview, only if member states chose the most competent, outstanding women when making nominations to fill appointments in the UN system. They should be the models”, she declared.

Reinforcing his arguments further, Ambassador Chowdhury said the political significance of this increase in the number of the women Ambassadors would be that their joint actions would draw more attention, bearing, of course, in mind that all Ambassadors to the UN act generally on the basis of instructions from their respective capitals.

“But, I believe, their coalition can join hands to focus on issues particularly those directly related to women’s empowerment and equality, like Goal 5 of SDG.”

They can also ask for greater engagement of Secretary-General’s leadership in the implementation of UNSCR 1325 on women and peace and security which has made the realization of women’s equal participation at all decision-making levels obligatory on all members of the United Nations and whose 20th anniversary is coming up in October 2020, he noted.

Realizing gender parity at the senior posts of the UN, both at headquarters and at field levels, could be another area for joint effort.

“Women Ambassadors could strategize to turn this newly gained numerical enhancement into an effective coalition to attain global objectives of women’s equality and empowerment,” he argued.

Apart from this increase in the number of women Ambassadors, another encouraging development had been that three consecutive women Ambassadors have been elected as President of the Economic and Social Council (ECOSOC) in 2017 –from the Czech Republic, 2018, from St. Vincent and the Grenadines, and 2019 from Norway.

This has improved somewhat ECOSOC’s dismal record of women Presidents, he said.

Since its beginning in 1946 and all the way upto 2003, ECOSOC’s practice of electing only men was challenged by Ambassador Marjatta Rassi of Finland as its first woman President, followed by second woman in 2009 before the successive three women Presidents – a total of 5 out of 74, said Ambassador Chowdhury.

“Given the unacceptably poor women’s representation as General Assembly and ECOSOC Presidents, women Ambassadors can continue their relentless efforts to improve gender parity in high offices,” he declared.

Meanwhile, addressing a working luncheon of the Circle of Women Ambassadors last April, the former President of the General Assembly Maria Fernanda Espinosa Garces said: “At the UN too – where we should be leading by example – only a quarter of Permanent Representatives are women. Only one of the General Assembly’s main committees is chaired by a woman. I hope that we, in this Circle, can encourage our colleagues to nominate more women to leadership positions in the General Assembly, and across the UN.”

In his annual report on “The Work of the Organization” released last week, UN Secretary-General Antonio Guterres claimed the world body continues to make significant progress towards gender parity.

For the first time in the history of the United Nations, “we have achieved gender parity in the Senior Management Group and among Resident Coordinators, and are almost at parity among the senior leadership ranks across the Organization, well ahead of my target date of 2021.”