The Rapid Decline in Civic Freedoms: 5 Countries to Keep an Eye on 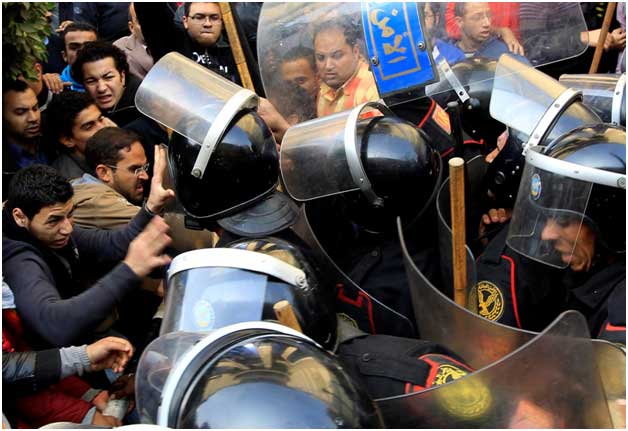 JOHANNESBURG, Nov 1 2019 (IPS) - 2019 has been a year of protest. From Algeria, to Chile, to Hong Kong, ordinary people have taken to the streets to voice their dissatisfaction with governance systems. Their causes are as diverse as the people pouring into the streets.

Public grievances range from corruption, anti-austerity measures, and electoral irregularities. The reasons for the mass mobilisations may differ, but the response by those in power are becoming alarmingly similar.

In far too many countries, the response has been to shut down the space for people to organise and to persecute those calling for change.

The new civic space watchlist by the CIVICUS Monitor shines a spotlight on Hong Kong, Colombia, Egypt, Guinea and Kazakhstan where there are escalating rights violations against activists, journalists and civil society groups.

In particular, this shortlist profiles a sample of countries where there are serious and ongoing attacks against the freedoms of peaceful assembly, expression and association.

In Hong Kong, there has been a continued deterioration of civic space since millions of people took to the streets on 9th June 2019 to protest against a proposed extradition bill, which would allow individuals, including foreigners, to be sent to mainland China to face trial in courts controlled by the Chinese Communist Party.

In response to weekly protests, human rights groups have documented excessive and unlawful force by security forces against protesters with impunity, including the use of truncheons, pepper spray, tear gas and rubber bullets. Journalists have also been targeted.

More than 1,300 people have been arrested in the context of the mass protest and some activists have also been attacked by pro Beijing mobs.

In Egypt, recent anti-government protests resulted in mass arrests and the use of excessive force by the authorities. Thousands of people have been arrested since the protests started in September, including journalists, human rights lawyers and activists. Many of those arrested have been charged on dubious grounds of using social media to spread false news, aiding terrorist groups and for participating in unauthorised protests.

The crackdown has also expanded to target the political opposition and anyone deemed to be connected to protests dating all the way back to 2011.

In Guinea, tensions have been on the rise since Guinea’s ruling party made a public call to change the constitution, which could abolish presidential term limits. The West African country is set for 2020 presidential elections and the current president, Alpha Condé, is not eligible under the current 2010 constitution.

During three days of protests in October against the proposed constitutional changes, at least nine people were killed and several protesters and protest leaders arrested. According to human rights organisations in Guinea, the plans for a new Constitution may destabilise the country and lead to renewed violence.

In addition, the authorities have obstructed the work of journalists and electoral observers, as well as periodically blocking access to social media and messenger applications. The repression has cast a shadow on the elections and the beginning of Tokayev’s period in office.

Colombia is the fifth country on the Monitor Watchlist, which remains one of the most dangerous places in the world to be a human rights defender. Dozens of community leaders have been killed this year as well as 7 political candidates running for local office in an election campaign marked by violence. Impunity for such crimes has been the rule.

The country is further backsliding into violence as post-conflict communities are left vulnerable to dissident armed groups and commanders of the Revolutionary Armed Forces of Colombia (FARC) announce their intentions to take up arms again, nearly three years after the historic peace accord with the Colombian government was signed.

While protests flare in all regions of the world, it is of utmost importance that people are able to freely express dissent without authorities using excessive force against them. Instead of using violence against protesters and restricting fundamental freedoms, governments should seek solutions by listening to the grievances of ordinary citizens and dissenting voices.