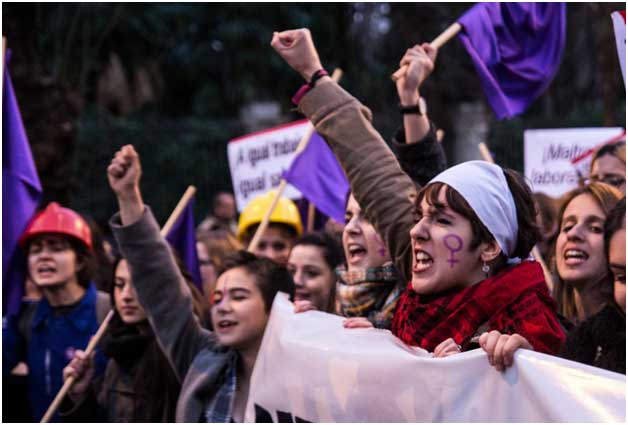 UNITED NATIONS, Jan 17 2020 (IPS) - The United States and 18 other UN member states have come under fire for denying a woman’s legitimate right to “bodily autonomy”—the right to self-governance over one’s own body without coercion or external pressure.

The Executive Director of Women’s March Global, Uma Mishra-Newbery, told IPS the United Nations has worked towards progress in fighting for women’s rights.

But many countries on the Human Rights Council continue to negotiate women’s human rights off the table, she pointed out.

In Sept 2019, she said, the world watched as the US, in partnership with 18 other member states, put forth a statement saying there is no international right to abortion.

“Yet the UN and member states fail to hold Saudi Arabia truly accountable for its actions. The UN must hold these governments accountable as they work to strip women’s rights away without repercussions”, she declared.

The member states who deny women access to safe and legal abortion represent 1.3 billion people, according to Women’s March Global.

As part of a global campaign for women’s reproductive rights, Women’s March Global has called attention to the “dangerous and alarming repeal of women’s rights to bodily autonomy, bringing international attention to these pressing issues.”

The 45 marches—the fourth annual event, with the participation of millions of women and allies – took place in Africa, Canada, Central and South America, Europe and Asia.

Purnima Mane, a former UN Assistant Secretary-General and Deputy Executive Director of the UN Population Fund (UNFPA), told IPS the March on January 18 to protest the inadequate progress and sometimes downright rollback of women’s right to exercise bodily autonomy through the right to abortion, “comes at a critical juncture in our history.”

She said as many as 48 of the 58 existing UN countries, signed the Universal Declaration of Human Rights in 1948.

Nonetheless, the UN as a body, has been limited in its work on abortion, due to its exclusion as a right from human rights treaties as a result of significant opposition from many quarters, she added.

“Besides, these treaties are not legally binding and some countries specifically see these issues as covered by domestic law.”

For example, she said, the Programme of Action (PoA) of the 1994 International Conference on Population and Development (ICPD), focuses on the obligation of governments to prevent unsafe abortion but does not refer to making abortion legal.

This obligation can of course open the door for national debates on how women’s overall health and bodily autonomy are linked. International human rights treaties which most governments have ratified, support the right of women to liberty and to health.

The UN often provides platforms to learn from examples of countries which have implemented these rights successfully, integrating women’s rights more broadly, including the right to bodily autonomy, said Mane, who is a former President and CEO of Pathfinder International.

Antonia Kirkland, a global lead at Equality Now, told IPS that UN Women, alongside the Mexican and French governments and feminists around the world, have chosen bodily autonomy and sexual and reproductive health rights as one of the Generation Equality Forum’s six Action Coalition themes to in the lead up to Beijing +25.

“This is a good sign that attention and resources are being focused in this direction and can hopefully help counteract moves towards greater restrictions on access to abortion in countries like the USA, as well as forced pregnancy and motherhood in Latin American countries”.

Kirkland said over the past few years, there has been an alarming and sustained rollback on women’s sexual and reproductive health and rights around the world.

Focusing the first women’s rights March of the new decade on bodily autonomy is about shining a much-needed spotlight on the systematic oppression that continues to prevent women and girls from exercising self-governance over their own body and reproductive choices, she noted.

Mane said abortion has, in fact, been available in many countries for years but it is heavily regulated with severe restrictions which make it difficult to access.

Over the last few years, these restrictions have grown rapidly almost globally. Animosity towards contraception complicates the situation even though there is ample evidence to show that preventing unintended pregnancies through access to modern contraception, reduces abortion rates in the first place, she added.

“The combination of restrictions in the practice of legal abortion and poor access to contraception for avoiding unintended pregnancies, lead to an increase in unsafe abortion and high rates of morbidity and mortality among women”, said Mane, who has served on boards of several international, non-profit organizations including as Governor of the Board of Governors, International Development Research Centre (IDRC) in Canada.

Mane also pointed out that women’s right to access to contraception is the first and essential step advocated by UNFPA for enhancing women’s health and reproductive rights.

“If women receive the needed education and information, have access to appropriate services and commodities, and benefit from a conducive policy and programme environment, their ability and right to make decisions concerning their own bodies will be enhanced which will benefit their health and well-being”.

She said the UN assists national governments in the process of making all of the above happen through the supportive role they play globally and nationally.

Organizations like UNFPA need all the support and encouragement they can get to do their bit in moving the world towards the goal of ensuring that women are in a position to make decisions concerning their own bodies and ultimately their own lives.”

Kirkland said the United Nations has a vital role to play in the protection of women and girls’ sexual and reproductive health and rights, and this involves working in partnership with member states to ensure that everyone is free to make their own decisions about their body, and is able to easily access family planning support, healthcare services and information.