Cora Weiss* is an Honorary Patron of the Committee on Teaching About the UN (CTAUN), the UN Representative of the International Peace Bureau and President of the Hague Appeal for Peace. She was among the few women drafters of Security Council Resoluion 1325, Women, Peace and Security, and among the founders of the Global Campaign for Peace Education (GCPE). 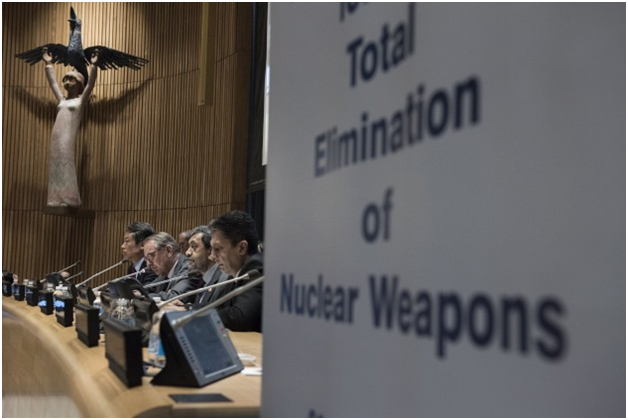 NEW YORK, Feb 12 2020 (IPS) - 75 years ago following the end of the Second World War and the first time any state has dropped an atomic bomb, not once, but twice, on Hiroshima and Nagasaki, 51 countries from all continents met to create the United Nations.

Its primary purpose, as stated in the Charter says: “We the peoples of the United Nations determined to save succeeding generations from the scourge of war…” Of course, it is also dedicated to human rights for all and equal rights for men and women and nations large and small and more…

But peace, prevention of war, is its ”most profound purpose,” Ambassador William vanden Heuvel said when he suggested we organize this conference on “War No More”.

It is to this purpose, to save humanity from war, that the Committee on Teaching About the UN with the co- sponsorship of the Permanent Mission of the Republic of Korea to the UN, has dedicated its conference which will convene on February 28, 2020. https://teachun.org/conference/2020-un/.

We honor the UN on its 75th anniversary and call for the full implementation of this purpose. 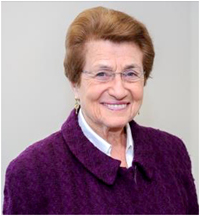 It is often said that as long as there are people there will be war. But it hasn’t always been that way and certainly war is not inevitable.

Indeed, not only has the UN called for saving succeeding generations, but the Charter also calls for “…the least diversion for armaments of the world’s human and economic resources…” (Art 26); the First Committee is dedicated to Disarmament.

Some say that as long as there is a right of self-defense (Art 51) there shall be war. We will see what the lawyers and experts including Liechtenstein’s Ambassador Christian Wenaweser and James Ranney, international law professor, say in their conversation.

Have you heard of Bertha von Suttner, the young poor Princess who answered an ad from Alfred Nobel for a housekeeper. In short, she left his employ having persuaded him to turn the profits from his invention of dynamite to support a Nobel Peace Prize.

In 1905 Bertha became a Nobel Peace Laureate for writing the best-selling, “Lay Down Your Arms”, (Die Waffen Neider) probably the only novel written about disarmament, and for organizing the world’s first International Peace Congress.

Getting rid of war has been a hope for generations. Eleanor Roosevelt said that that, “the idea of war is obsolete”. Abolishing war has been a serious multinational effort. 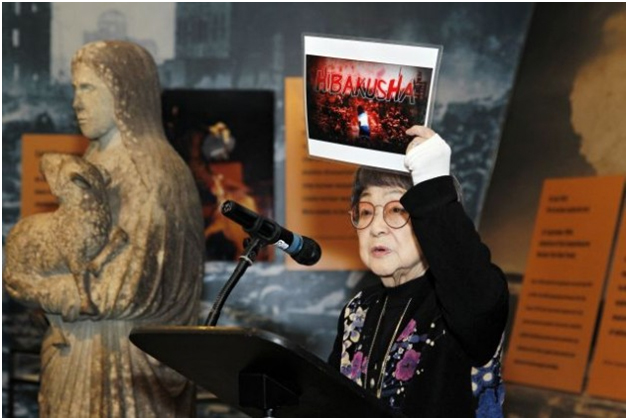 Following the first World War and the League of Nations, the Kellogg Briand Pact, 1928, https://history.state.gov/milestones/1921-1936/kellogg was signed by all “major states” including the foreign ministers of the US and France, who agreed not to… “resort to war to resolve disputes or conflicts of whatever nature.’’

The Pact could not prevent or stop wars of “self-defense” and had no enforcement capacity.

Lord Bertrand Russell and Albert Einstein, who said that nuclear weapons threaten the “continued existence of mankind”, also called for the end of war. War, in the age of atomic bombs, “is the most serious problem that has ever confronted the human race,” said Lord Russell. Thus, the Russell Einstein Manifesto of 1955 was signed by the world’s leading scientists including Marie Joliot-Curie.

In 1999, on the centennial of the world’s first Peace Congress, the Hague Appeal for Peace convened 10,000 people from over 100 countries in The Hague and called for Peace is a Human Right and it is Time to Abolish War. Archbishop Desmond Tutu told us, “If the world could get rid of Apartheid, why not war?” www.haguepeace.org

UN Secretary–General Kofi Annan addressed the HAP conference, urging everyone, “Don’t despair, don’t deny and by all means don’t ever give up”.

The Hague Agenda for Peace and Justice for the 21st Century with 50 Articles going from a Culture of War to a Culture of Peace, became a UN document, A/54/98.

It created the Global Campaign for Peace Education which states, “A Culture of Peace will be achieved when citizens of the world understand global problems, have the skills to resolve conflicts, and struggle for justice non-violently.

“War No More” takes its name from the drawing, Nie Wieder Krieg, (War Never Again) 1924, by the German artist and peace activist, Kathe Kollwitz. Her son was killed in the first World War. https://archive.org/details/warnomorefinalitalics2

The apocalyptic twins, nuclear weapons and the climate crisis, are the existential threats destined, if not reversed, to cause the war no one survives. As long as there is armed violence between states, or groups, no amount of good governance, democracy, human rights or development can be sustained.

Positive Peace, says the Institute for Economics and Peace, not only looks at the risks of violence but at what builds peaceful and resilient societies.

We urge everyone to imagine what the Future they want looks like. What can you take away from this conference to work on to make your future happen? What can we ask of the Member States to make a World Without War?.

The conference is organized around 6 conversations: It starts with Nobel Peace laureate and Liberian activist and educator, Leymah Gbowee in conversation with author, activist Gloria Steinem facilitated by ERA Coalition CEO, Carol Jenkins. They will discuss the role of civil society and women in the prevention of war and in peace processes.

*During the Vietnam War, Cora Weiss was co-chair of the Committee of Liaison which hand-carried mail to American pilots –POW’s– in North Vietnam and brought mail back to their families every month for 3 years. And she, with a few others, brought three former POW’s home as a peace gesture before the war ended.