Unlawful Use of Force by Police at Protests Across the US 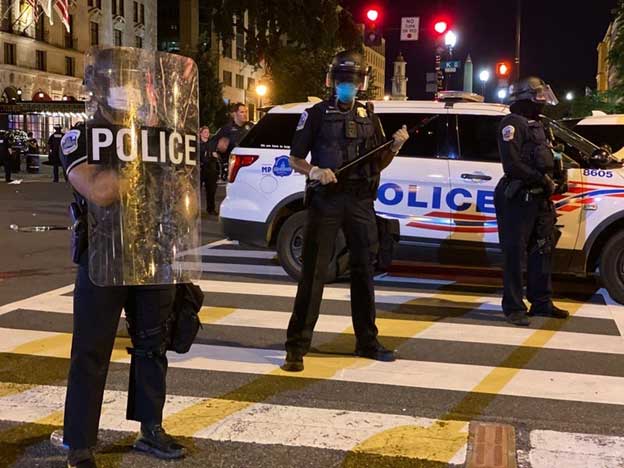 Amnesty International has documented 125 separate incidents of police violence against protesters in 40 states and the District of Columbia between 26 May and 5 June 2020.

These acts of excessive force were committed by members of state and local police departments, as well as by National Guard troops and security force personnel from several federal agencies.

Among the abuses documented are beatings, the misuse of tear gas and pepper spray, and the inappropriate and, at times, indiscriminate firing of less-lethal projectiles, such as sponge rounds and rubber bullets.

To evaluate these incidents, Amnesty International’s Crisis Evidence Lab gathered nearly 500 videos of protests from social media platforms. This digital content was then verified, geolocated, and analyzed by investigators with expertise in weapons, police tactics, and international and US law governing the use of force.

These human rights violations by US police against peaceful protesters – which were neither proportionate nor necessary to achieve a legitimate law enforcement objective – are particularly egregious as they have occurred at demonstrations denouncing just such police behavior.

Most of these protests have been peaceful, but in some a minority of protesters have committed unlawful acts, including acts of violence. In such cases, security forces have routinely used disproportionate and indiscriminate force against entire demonstrations – without distinguishing, as legally required, between peaceful protesters and individuals committing unlawful acts. 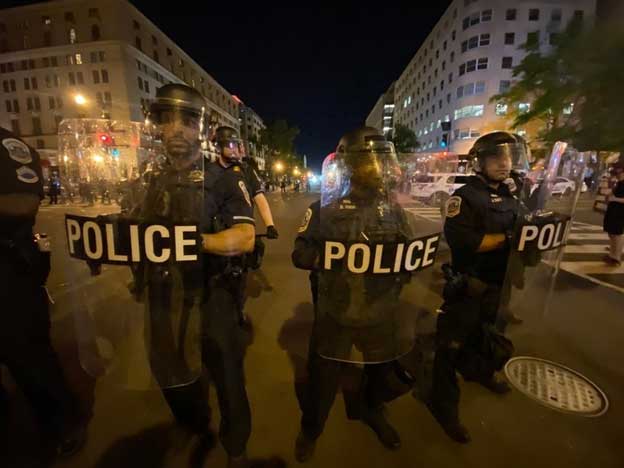 Besides the severity of the abuses, what is most striking about the incidents Amnesty International documented is their broad geographic scope, indicating the national scale of the problem of police violence.

On 30 May, a joint patrol of Minneapolis police and Minnesota National Guard personnel unlawfully shot 37/40mm impact projectiles at people peacefully standing on the front porches of their homes. The security forces yelled “light them up” before firing.

The attack appears to have been done in retaliation for the people being outside after curfew and videotaping the forces with their smartphones.

On 1 June, Pennsylvania State Police and City of Philadelphia police confronted a group of protesters on a highway that runs through the city center. Even after the protesters left the road bed, police continued to use pepper spray and tear gas to drive the crowd up a steep embankment and against a high fence.

Lizzie Horne, a rabbinical student who was in that group, described the experience:

“Out of the blue, they started breezing pepper spray into the crowd. There was one officer on the median who was spraying as well. Then they started with tear gas. Someone who was right in the front – who had a tear gas canister hit his head – started running back … We were against a big fence that people had to jump over up a steep hill. The fence was maybe 6 feet tall.

People started putting their hands up – but the cops wouldn’t let up … We were drooling and coughing uncontrollably … The police started coming up the hill and continued to harass people who were still on the hill – they were hitting and tackling people. They were dragging people down the hill and forcing them down on their knees, lining them up kneeling on the median on the highway with their hands in zip ties – and pulling down their masks and spraying and gassing them again.”

In Washington, DC, also on 1 June, security personnel from a variety of federal agencies, including National Park Police and the Bureau of Prisons, plus DC National Guardsmen, committed a range of human rights violations against protesters in Lafayette Park.

These included misusing a variety of riot control agents, and tossing “stinger ball” grenades, which contain pepper spray and explode in a concussive flash-bang effect, throwing rubber pellets indiscriminately in all directions.

The violations were not limited to the largest cities, however. Local police inappropriately used tear gas against peaceful protesters in Murfreesboro, Tennessee, Sioux Falls, South Dakota, and Conway, Arkansas, among others.

In Charlotte, North Carolina, police used tear gas to trap protesters between two tall buildings, and then shot pepper balls at them from above. During a protest in Salt Lake City, Utah, police held down a homeless man and shot him in the back with a 37/40mm impact projectile.

In Fort Wayne, Indiana, a local journalist lost his eye when police shot him in the face with a tear gas grenade.

Less-lethal weapons—such as tear gas and pepper spray grenades, and impact projectiles such as sponge rounds, baton rounds, and rubber bullets—should never be shot at close range or aimed at the head, as serious injury or death is possible.

There is no legitimate use for projectiles that cause a blinding flash of light in public order policing operations, such as the policing of a protest.

Such weapons are designed to disorientate their targets, which is antithetical to the purpose of weapons such as tear gas, which are only to be used to disperse crowds where violence is so widespread that no other less harmful means will disperse them.

For this reason, weapons that combine a gas and a flash, such as ‘stinger balls,’ can never be legitimately used in the policing of assemblies.

The US government is obligated under the US Constitution and international human rights law to guarantee the right to freedom of peaceful assembly. Law enforcement agencies—at the federal, state, and municipal levels—have a responsibility to respect, protect, and facilitate peaceful assemblies.

As such, law enforcement authorities are only permitted to use force at public assemblies when it is absolutely necessary and in a proportionate manner to achieve a legitimate law enforcement objective.

Any restrictions of public assemblies, including the use of force against demonstrators, can never be discriminatory toward any race, ethnicity, political ideology, or other social group.

The enforcement of a curfew is not, in and of itself, reasonable grounds to use force, nor do curfews supersede the human right to peaceful assembly or First Amendment freedom-of-expression protections.

If it does become necessary for law enforcement to disperse a protest—for example, as a result of individual protesters perpetrating acts of serious violence—law enforcement officials can use force only if non-violent means are unlikely to be effective.

In the use of force, law enforcement officials must seek to minimize harm and injury, and ensure it is proportionate to the level of resistance by the demonstrators. Even then, authorities must strictly distinguish between peaceful demonstrators or bystanders, and any individual who is actively engaged in violence.

The violent acts of an individual never justifies the use of force against peaceful protesters generally, and force is only justified for the minimum duration necessary.

In order to prevent impunity and the repetition of abuses, authorities in the US must investigate, prosecute, and punish the unlawful use of force by police or others, and provide full reparations to the victims of such violence.

To date, there is little indication that these obligations have been taken seriously across the US.