The US & the UN — A Looming Confrontation

Dr Palitha Kohona is a former Chief of the Treaty Section in the UN Office of Legal Affairs; a one-time chairman of the General’s Assembly’s Legal Committee; and former Permanent Representative of Sri Lanka to the United Nations

”As a New Yorker and first-generation American, I have the pleasure and great honor to serve as the Commissioner for International Affairs for the most global city in the world. New York City is home to the largest diplomatic community in the world – 193 Permanent Missions, 116 Consulates and the headquarters of the United Nations”-- Penny Abeywardena, Commissioner.

COLOMBO, Sri Lanka, Jun 25 2020 (IPS) - The recent approach of the US to the UN and its agencies has left many shaking their heads. The US, under President Roosevelt, played a seminal role in creating the UN and its key agencies after World War II and subsequently nurturing them.

But the Organization that Secretary-General Dag Hammarskjold once said was created not with the intention of taking mankind to heaven but to prevent it from going to hell, is today itself mired in hellish doubts about its future, particularly with the US, its physical host.

The biggest funder and the one remaining global super power, the US has been in a foul mood, pulling out of the Human Rights Council (HRC), the UN Educational, Scientific and Cultural Organization (UNESCO) and ceasing cooperation with the World Health Organization (WHO) while threatening funding cuts.

Despite the many criticisms leveled against it, the UN has chalked up many global successes. To begin with, despite being unable to eliminate regional conflagrations, it has, inter alia, succeeded in avoiding a global war, contributed to improving living standards and advanced the rule of law and respect for human rights.

The US for its part, a key architect of the UN, has successfully maneuvered the Organization on countless occasions to achieve its global agenda and policy goals, while maintaining a mantle of legal legitimacy and moral justification.

Following the decolonization process and the emergence of other economic and military power centres, especially China, the Organization has not always been at the beck and call of the Western alliance that has irked the West, in particular the US.

While using the UN and its agencies to castigate others, e.g., Sri Lanka, North Korea, Iran, etc over human rights issues, the US has had no qualms about using its muscle to block a recent resolution tabled by the 54 member African Group at the Human Rights Council on black deaths at the hands of the police in the US. Some of its allies, including Australia and the Netherlands supported the US, as it sought to suppress the international criticism.

This precedent set at the HRC may be difficult to manage in the future even when trying to raise genuine human rights issues. In addition, the US has studiously used its long arm to block any action by the International Criminal Court (ICC) on violations of humanitarian standards by US or Israeli military personnel while readily supporting such action in the case of African leaders. 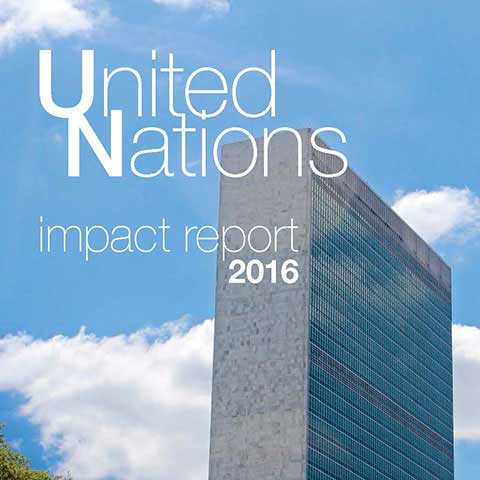 The UN Impact Report 2016 is a cost-benefit analysis of hosting the UN in New York City. Credit: Office of the Commissioner for International Affairs, New York City

The Security Council, with US support, has referred the leaders of Libya and Sudan to the International Criminal Court. The targeting of African leaders caused some African countries to threaten to leave the ICC.

We are reminded that the US insisted on Article 98 of the Rome Statute which prohibits the ICC from requesting assistance or the surrender of a person to the ICC, if to do so would require the state to “act inconsistently” with its obligations under international law or international agreements unless the state or the third-party state waives the immunity or grants cooperation.

The Bush Administration claimed that the BIAs were drafted out of concern that existing agreements—particularly the status of forces agreements or status of mission agreements (SOFAs or SOMAs)—did not sufficiently protect Americans from the jurisdiction of the ICC.

The Clinton Administration signed the Rome Statute in 2000, but did not submit it for Senate ratification. The George W. Bush Administration, the U.S. administration at the time of the ICC’s founding, stated that it would not join the ICC.

President Trump has said, “As far as America is concerned, the ICC has no jurisdiction, no legitimacy, and no authority. The ICC claims near-universal jurisdiction over the citizens of every country, violating all principles of justice, fairness, and due process. We will never surrender America’s sovereignty to an unelected, unaccountable, global bureaucracy.”

In April 2019, the United States revoked the visa of the Prosecutor of the International Criminal Court, Fatou Bensouda, in anticipation of a later investigation into possible war crimes committed by U.S. forces during the War in Afghanistan. The investigation was authorized in March 2020. In June 2020, Donald Trump authorized sanctions against ICC in retaliation.

In 2002, the U.S. Congress passed the American Service-Members’ Protection Act (ASPA), which contained a number of provisions, including authorization for the President to “use all means necessary and appropriate to bring about the release of any U.S. or allied personnel being detained by, on behalf of, or at the request of the International Criminal Court”, and also prohibitions on the United States providing military aid to countries which had ratified the treaty establishing the court.

The US has also denied entry visas to certain individuals to attend meetings of the world body, including senior officials from Iran, Syria, Yemen, Libya, Venezuela, North Korea, Russia and Cuba, among others.

The US will be severely challenged if it seeks to justify its actions as being consistent with its obligations under the Head Quarters Agreement with the UN. (HQ Agreement, 11 UNTS 1).

With the US in the present confrontational mood, and the real risk of an intractable conflict between the UN and the US, Covid19 provides a convenient way out with which the UN will be comfortable.

The members of the world body can now opt to address the organization through video link. An entry visa will no longer be sine qua non for the purpose of entering the US and addressing the UN.

This mechanism, of course, will not sit comfortably with the New York hotels and restaurants, not to mention the hire car companies.