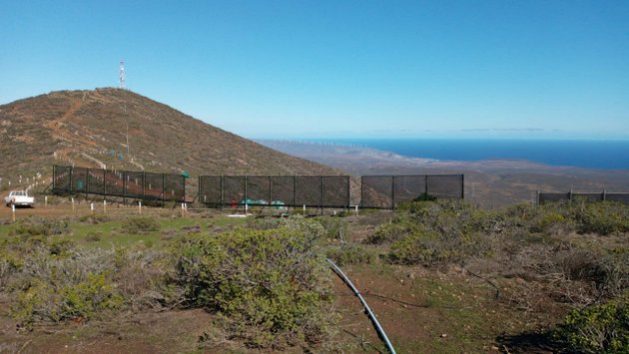 The project to repair and install new fog traps in the Peña Blanca Agricultural Community will be completed by the end of 2020. With funding from UNDP, the initiative will include infrastructure to receive visitors in this community in Coquimbo, the region that forms the southern border of Chile's Atacama Desert. CREDIT: Fundación Un Alto en el Desierto

OVALLE, Chile, Jul 15 2020 (IPS) - “The harvested water has helped us at critical times and the fog nets have also brought us visibility. Today we produce beer here and many tourists come,” says Daniel Rojas, president of the Peña Blanca Agricultural Community in Chile.

Located in the south of the Coquimbo region, 300 km north of Santiago, Peña Blanca is suffering a brutal drought and faces the threat of becoming part of the Atacama Desert by 2050, the United Nations Convention to Combat Desertification (UNCCD) warned two years ago.

¨In Peña Blanca until 2000, water ran off the surface, and the villagers had dikes to take turns to use the water,” Nicolás Schneider, a geographer with the “Un Alto en el Desierto” (A Stop in the Desert) Foundation, the NGO behind the installation of fog harvesters in the region, told IPS.

The official record of rainfall in the municipality of Ovalle, in the basin of the Limarí River, the main river in Coquimbo, indicates an annual average of just 102.6 millimetres in the last 30 years.

Coquimbo is home to 771,085 people, 148,867 of whom live in rural areas. It is the southern border of the Atacama Desert, the driest desert on earth which has the most intense solar radiation on the planet. It encompasses six northern regions in this long, narrow country that stretches between the Andes Mountains and the Pacific Ocean and has a population of 18.7 million people.

“I am a livestock breeder and I also organise events for delegations that visit the fog nets in Cerro Grande,” Claudia Rojas, who at 53 is making the shift from livestock raising to a tourism microenterprise, told IPS.

“I was born and raised in Peña Blanca and I wouldn’t change it for any other place. Now I have only a few goats (20) and sheep (60). I had up to 200 goats but I have been reducing the herd because there is not enough natural pasture,” she said.

“I hope to continue receiving delegations when the pandemic is over. I serve them cheese, roasted kid (young goat) and local products. At my house or in the reserve,” she said.

What Claudia loves the most are the visits by hundreds of schoolchildren “who are happy to see nature.”

“From up above they can see the (Andes) mountain range and on the other side the sea. The main characteristic here is the fog. And they are amazed when the fog reaches the hill and they see how the water is harvested,” she said.

The Agricultural Community of Peña Blanca, made up of 85 families, has 6,587 hectares, 100 of which constitute the Cerro Grande Ecological Reserve, where the fog harvesters were installed 15 years ago. Back then, many locals could not imagine the impact and benefits the nets would have.

“They have made us well-known and that has brought the community resources for other projects,” said its president, Daniel Rojas, 60 (no relation to Claudia or other sources with the same surname, which is common in the area).

Hundreds of primary school students in Chile attend workshops and talks on the environment at the facilities of the Cerro Grande Ecological Reserve in Peña Blanca. University students also come to work on their theses, and researchers visit, interested in replicating water harvesting through fog traps in other locations in Chile. CREDIT: Fundación Un Alto en el Desierto

In Chile, the “agricultural community” is a legal figure for the collective property and usufruct of the land, in which the community members are given portions of land to use while another part is collectively managed.

“We have harvested a significant amount of water that has helped us in difficult times. At first to irrigate the vegetation and reforest with native species, and then to water the animals. We built a drinking trough, piping the water two km downhill.”

“Later, a 10,000-litre tank was made to collect water for people living nearby, to use when the tanker truck does not come,” he said.

Eight years ago, Peña Blanca beer began to be brewed, made with fog water, which is softer. Its light (Scottish) and dark (Brown) versions competed at the 2015 ExpoMilan and won the audience award.

“Our beer made with 100 percent fog water is popular and successful. It has drawn attention to our farming community. I work (in the brewery) every (southern hemisphere) summer and receive 30 tourists a days, from Argentina, Brazil and other countries,” he told IPS proudly.

The plant produces 2,500 litres a week, and production is set to increase because the plant will be expanded.

“When these young entrepreneurs showed up I said to myself: ‘Who’s going to come all this way for the beer?’ We’re a long way from the Pan-American Highway. Then I thought, ‘Who’s going to drink this beer?’ And third, I thought it was money laundering. But everything was the other way around. Today, in the midst of this global pandemic, they’re still coming for the beer,” he said.

Daniel Ogalde, 47, who is also from Peña Blanca, has been the park ranger since March. He is dedicated to the maintenance, irrigation and replanting of native species in the ecological reserve.

“My idea is to be here for a long time. Because of the coronavirus, visits are suspended, but in August we plan to restart them,” he told IPS, adding that the reserve “is a source of pride for the community and everyone is concerned about its care and maintenance.”

Guido Rojas, 58, lives in Peña Blanca but works at the nearby lookout point at the Talinay Wind Park, owned by the ENEL Green Power company. “Harvesting water helps us because there have been many dry years,” he said.

The experience “has been maintained by the support of the community and the people who live here,” he added.

A qualitative leap has been made since July. The United Nations Development Programme (UNDP) has granted 40,000 dollars to renovate and build fog nets, install lookouts, paths, signage and toilets. The programme ends on Dec. 31.

Since it was created in 2006, the reserve has had 24 fog-catchers, with a total of 216 square metres of double-layer 35 percent Raschel mesh.

“The expansion consists of the repair of 12 and the construction of 16 new fog nets. We will have 28 totaling 252 square metres, to harvest water,” said Un Alto en el Desierto’s Schneider.

Now 1,537 litres of water will be harvested per day, he explained.

In a calendar year, half of the fog water is harvested in September, October and November, when 20 litres/day are harvested per square metre, more than three times the average.

Fog traps were, in fact, an invention of Chilean physicist Carlos Espinosa, who donated the patent in the 1980s to the United Nations Educational, Scientific and Cultural Organisation (UNESCO), making it possible for them to be used in different countries.

Fog catchers consist of fine mesh nets known as Raschel set up on foggy slopes to catch suspended drops of water, which gather and merge, running from small gutters into collection tanks.

The new systems have a design called “comunero” and created by Schneider and Daniel and Guido Rojas.

They are individual structures of nine square metres each that have several advantages: they are cheaper, easier to transport and to maintain and if any one suffers a flaw the others continue harvesting water.

They are expected to remain fully operational until 2028.

The first fog-catching project in Chile was in the mining town of El Tofo, in a region north of Coquimbo. But it was abandoned in the 1990s. In Coquimbo, there are other facilities for harvesting fog water, for individual and collective use. But none are as well-known as Peña Blanca’s.

In Alto Patache, near Iquique, in the far north of Chile, there are fog traps that harvest seven litres a day per square metre, but the project is for scientific research. Meanwhile, in Chañaral, a municipality in the Atacama region, there are fog catchers whose water is bottled and also used for aloe vera production.

According to Schneider, the fog catchers “can be replicated along the entire coastal strip between Papudo (centre) and Arica (far north), which is more than 2,000 km” of this South American country’s 6,435-km coastline.

“They are really useful for isolated areas, fishing coves and scattered populations neglected by public spending. And they are very important for combating desertification because so much water can be harvested in springtime, to use in the hot summers,” he said.

The problem standing in the way of expanding the use of fog traps, according to Rojas, the community president, is the lack of government funding for this technology and its implementation.

“We have a lot of coves that are only supplied by tanker trucks. Perhaps fog traps are not the total solution, but they can help a lot when water is scarce,” as is the case in northern Chile, he argued.