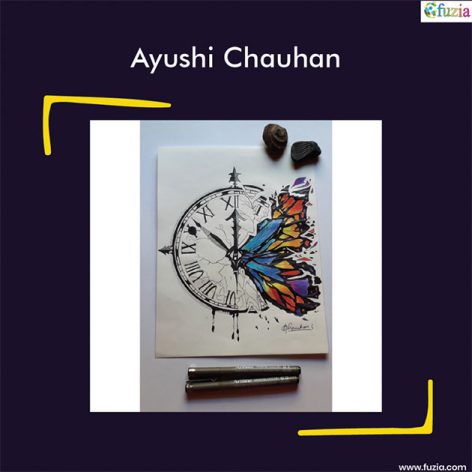 NEW YORK, Sep 1 2020 (IPS) - Eight years ago, at the age of eleven, Fuzia co-founder Riya Sinha decided to start a writing club for school girls. Stemming from this initiative a few years later Sinha, along with co-founder Shraddha Varma, decided to start the online platform for women. Their story and Fuzia’s DNA are intrinsically wrapped around each other – and highlight how even in the age of feminism where women’s voices tend to be drowned out, a platform for them can become a global success.

Sinha in an exclusive interview with Inter Press Service explains that Fuzia, with 4-million majority-female followership, was started after she published a book.

“We wanted to give girls a voice. I had written my first book: Runaway Twins when I was 11 and sold it over Amazon and through the local Palo Alto bookstore, Books Inc. in the United States,” she said. “This got me into thinking that every girl, in each corner of the world, needs to be given a place to express and engage. Each has a story, and what better thing can there be other than providing them with a platform? This is why we launched Fuzia.”

The website, which started primarily as a writers’ club, has broken barriers in an age of so-called women empowerment but where men still outweigh women in their impact in the publishing world.

More than 80% of the 100 most popular novels were written by men, according to an interactive infographic by Wordery published in 2019. A year earlier, a study found that three leading literary publications devoted less than 40% of their coverage to women authors.

Other factors set boundaries for female writers. Women, in developing countries, but their hobbies and creative talents at the backseat focusing on building a family first, then a career, and lastly express her creative side. A piece, if published, is then scrutinized by society and family. The scene is a bit different in countries like the United States and Canada – but there, creativity is overshadowed by the prohibitive costs of publishing.

Like many institutions, the publishing industry stands accused of gender bias. Every year, Women in Literary Arts (VIDA) Count goes through literary journalism outlets and tallies the genders of the writers whose works are featured and reviewed in those outlets.

According to their most recent study, in 2015 books by women made up less than 20% of books reviewed in the New York Review of Books, 30% in Harper’s Magazine, 29% in the Atlantic, and 22% in the London Review of Books.

Fuzia, however, is breaking these barriers for women and has rapidly become one of the topmost ‘liked’ communities on Facebook. 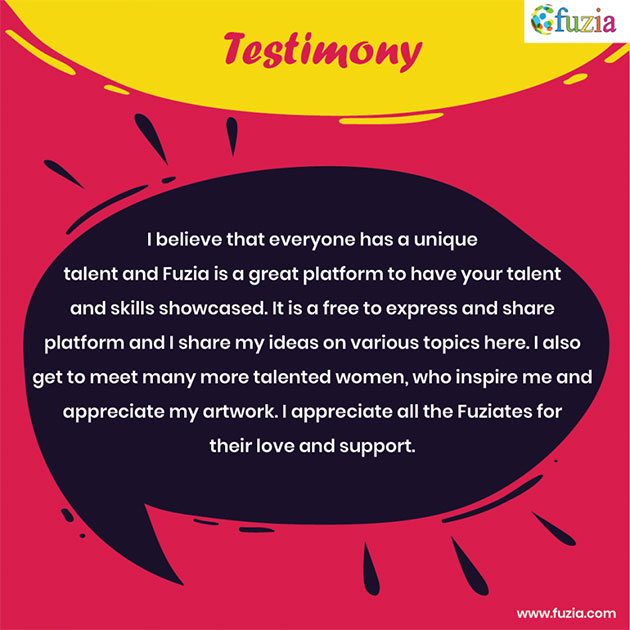 Young artist Ayushi Chauhan is inspired and supported by the Fuzia community. This is a quote from her published there.
Credit: https://www.fuzia.com/

Sinha says she is proud to bring together hundreds of thousands of women from Bangladesh, Egypt, India, Indonesia, Nepal, Pakistan, Philippines, the U.S., and other places. Fuzia followers across the globe drive women empowerment and creativity through their fusion of cultures and ideas.

Central to Fuzia’s philosophy is to give women a voice. Women play a crucial role as daughter, sister, mother, and wife, supporter of the community as a friend and caregiver – but often, her voice is numbed. If her voice is given a platform, and she is encouraged to make her point come across and delivered to a greater audience, then, this will help solve a lot of underlying issues. Critical topics like domestic violence, domestic abuse, when, why, and how, methods of coping, strategies for help, the root cause of bullying, gender differences, treatment of sexual orientation, and many other disparities will surface, and with accurate reporting could provide solutions and support.

During this critical time, when the world is dealing with the COVID-19 pandemic, Fuzia adapted its programs to support women.

“We prioritized by looking at what is most needed in the world today. For example, in the time of lockdown, we began developing Fuzia Wellness more rapidly, as people may need more access to mental health help when isolated at home,” Sinha said.

The platform, having just celebrated its 8th anniversary, has been recognized globally with the team awarded by the World Economic Forum “Young Leaders Creating a Better World for All” in 2018. Sinha has been invited to the TEDx stage, where she talks passionately about the role youth have in changing the world.

“Our goals for the future are to be self-sustaining and generate revenue, expand the brand of Fuzia to become like another social media platform in its influence,” she says.

“We already link up talents, groom them, and offer career training. Many girls, from all over the world, have been using our platform, and they have become entrepreneurs, they have become small business owners, tech start-up founders, and more.”

The website and its underlying philosophy could also encourage female authors by supporting them and giving them the means to sustain this career choice. Fuzia supports its users with engagements of many, where anyone can publish, get noticed, and get constructive reviews. They also hold period writing contests and the winners are presented with acclamations, financial benefits, a pre-start to career, and mostly an audience of millions.

College student and Fuzia top user Ayushi Chauhan (22) said her experience on the platform had been positive.

“I believe that everyone has a unique talent, and Fuzia is a great platform to have your talent and skills showcased. It is free to express and share the platform, and I share my ideas on various topics here. I also get to meet many more talented women who inspire me and appreciate my artwork. I appreciate all the Fuziates for their love and support.”

With women empowerment platforms, like Fuzia, where technology meets creativity, it is hoped that more women can devote their time to writing and creating undampened by social boundaries. The supportive nature of the website means that barriers to creativity – where a woman may find herself scrutinized by family and society are broken down.

The Artists of Fuzia, Writers of Fuzia, Photographers of Fuzia identify talents and showcase them in front of a broad audience.

“I’m currently in my 2nd year of graduation in commerce. I began my craft four years back and still find myself sketching, painting, making some craft, or just doodling. I have kept my zeal to polish my skills intact, and I believe in taking inspiration from my flaws,” Chauhan said. “It is because of my passion that I challenge myself every day to learn new skills and Fuzia has been the best platform to help me do this. I showcase my artworks and creativity at Fuzia, and I grow better each day.”

With challenges like user visibility, retention, and coping with an ever-changing face of the digital media and publishing scene, any company wishing to make an impact needs grit.

Fuzia aims to hold on to their vision of empowering creative women through the fusion of cultures and ideas and have the open company culture of accepting and embracing change so that everyone can have a voice and make it heard without any barriers, said Sinha.

“Overall, what we give them is a playground where they can express, speak, and thrive. And that too, without any judgment. We give them a voice,” Sinha said.