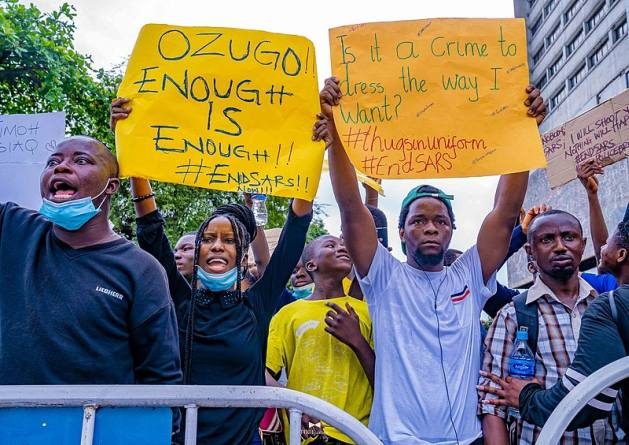 Protesters hold up their placards in front of the Lagos State House. Credit: TobiJamesCandids/Wikimedia Commons.

ABUJA, Oct 28 2020 (IPS) - On October 20, 2020, young Nigerians who were protesting against police brutality were shot by men in Nigerian military uniforms. Unarmed, peaceful citizens were massacred at the Lekki Toll Gate in Lagos, southwest Nigeria.

The Governor of Lagos state, Jide Sanwo-Olu earlier in the day had announced a 24-hour curfew to curb violence that erupted following the #EndSARS Campaign. SARS is Special Anti-Robbery Squad, established in 1984 to combat armed robbery which was rife then. However, SARS has been on a killing spree of young Nigerians. Protesters are demanding for the disbanding of SARS, prosecution of indicted officers and total reform of the Nigerian Police Force.

I do not know how long this campaign against police brutality will last. However, one thing I am sure of is the mental health consequences of the pre-meditated massacre of young Nigerians at the Lekki Toll Gate will be with us for a long time

Governor Sanwo-Olu’s announcement for curfew to begin at 4pm was made at 11:49am on the same day. This meant that a city of more than 20 million people was somehow supposed to magically beat the notorious Lagos traffic, get off the streets and be at home within 4 hours. I do not live in Lagos. However, I am aware of the confusion that arose as residents scampered home. My sister-in-law drove through the Lagos traffic from Apapa to Ojuelegba to make sure she was home for her three daughters aged 7 years and below.

There were complaints on social media about the short time available for people to get home before the curfew began. Human rights advocates urged residents to do everything possible to obey the directives. However, it is understandable that not all would be able to. Some peaceful protesters stayed back to continue pushing their message of disbanding SARS, at the Lekki Toll Gate, Lagos.

I followed the protest over Twitter while preparing dinner for my wife and daughters. My wife was tracking it too, and soon she called to me in tears that these peaceful protesters were being shot. Coincidentally, one of Nigeria’s celebrity Disc Jockeys (DJ Switch) was a protester at Lekki Toll Gate and live streamed the shooting.

When I viewed it, it was pure chaos hearing the sounds of multiple gunshots and the screams. It was like a war zone. It was also pitch dark because lights were off at the usually well-lit area. Sadly, these young protesters assumed they would be safe if they sat on the ground while singing Nigeria’s national anthem and waving Nigeria’s flag. It was a fatal assumption.

This experience has negatively affected my mental health. I am completely overwhelmed with feelings of helplessness and apathy. I could not sleep that night. I kept turning and tossing. I was edgy and jumpy for days. For instance, not long after daybreak, I heard loud sounds and I thought they were gunshots. It turned out to be sounds made by masons at a construction site next to my house. A week later, I am still trying to make sense of this massacre.

I am not alone in my reaction to the horrible events. Indeed, there is fear and apprehension in the land. All over social media, Nigerians are sharing how depressed they are by this massacre:

For someone who is used to being angry, and channeling that anger, today feels very different. It’s anger. Heartbreak. A sense of helplessness. And for the first time, doubt. This is 2020.

For someone who is used to being angry, and channeling that anger, today feels very different. It’s anger. Heart break. A sense of helplessness. And for the first time, doubt.

In response to his tweet, my friend and laboratory scientist Celestina Obiekea responded:

Today, I can’t even channel any anger… I’m just numb… and when I think my heart can’t break any more than it has already, it breaks all over again.

For someone who is used to being angry, and channeling that anger, today feels very different. It’s anger. Heart break. A sense of helplessness. And for the first time, doubt.

With such strong emotions, Nigerians are searching for answers and mental health support. I am not surprised that Nigeria’s top mental health advocacy organization, Mentally Aware Nigeria Initiative (MANI) is inundated by calls and have now extended their usual service hours.

With these increased requests for mental health therapy by Nigerians, my friend and MANI founder, Dr. Victor Ugo sent out this this message for international mental health support volunteers.

Reaching out for help to all my friends in the international #mentalhealth community. We’ve just had the most overwhelming day since Mentally Aware Nigeria Initiative (MANI) started providing crisis support services in Nigeria, way beyond what we experienced during the months of #COVID19 lockdown. We are very much overwhelmed and need your help. If you have Mental Health and Psychosocial Support experience and can provide remote support, please fill this form. If you aren’t able to help, please do share across your networks.

The mental health services provided by MANI are very important in a country like Nigeria with poor knowledge of mental health and inadequate human resources for mental health. In 2019, EpiAFRIC and Africa Polling Institute conducted the mental health in Nigeria survey that found most people know little about it or how to help.

For instance, 54% say it is caused by evil spirits, and when someone has a mental health illness, 18% say they will take the person to a prayer house. For a country of about 200 million people, Nigeria has only 250 psychiatrists, according to the Association of Psychiatrists of Nigeria. This means that approximately one psychiatrist provides mental health services to 800,000 Nigerians.

Nigerians currently feel like sheep under attack without a shepherd. President Buhari made a national broadcast without acknowledging the massacre at Lekki Toll Gate. Initially, the Lagos State Governor had alluded that those responsible were forces beyond his control. However, at a recent interview, he mentioned that it was indeed the Nigerian military that is responsible for the massacre.

I do not know how long this campaign against police brutality will last. However, one thing I am sure of is the mental health consequences of the pre-meditated massacre of young Nigerians at the Lekki Toll Gate will be with us for a long time.