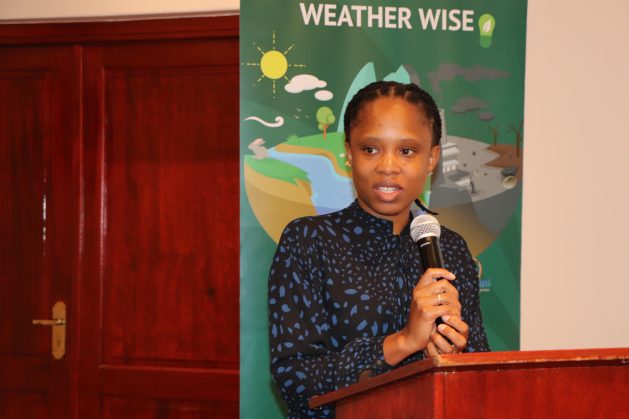 Director of Meteorology at the Ministry of Tourism and Environmental Affairs (MTEA), Duduzile Nheengethwa-Masina, said while Eswatini was able to implement many projects in the different sectors of the NDCs, some targets were not met. Credit: Mantoe Phakathi/IPS

MBABANE, Nov 17 2020 (IPS) - Barry de Maine, the director of Green Cross Pharmacy, lost about $ 7,675 worth of stock when The Mall, the largest shopping centre in Mbabane, was flooded back in 2003. But when the flash floods hit again this year, he had already installed a flange to stop water from coming in.

“This is the best I could do under the circumstances,” De Maine told IPS, adding: “Otherwise since we started experiencing floods at The Mall (17 years ago) nothing has been done.”

Besides damage to shops at The Mall, customers’ cars had to be towed away because they were floating in water.

While De Maine attributes the floods to climate change, he said no one has engaged him to discuss a long-term solution to what has become a frequent event in the capital city.

“I hear people talking about the floods but no one has ever proposed anything. I’m willing to listen but I’m more interested in action,” said De Maine.

He is likely to see action because the southern African nation is determined to leave no one behind, as it renews its commitment to the Paris Agreement. The country made its first commitment to the Agreement in 2015 when it submitted its Nationally Determined Contributions (NDCs) to the United Nations Framework Convention on Climate Change.

But the first NDCs had no implementation plan, costing or monitoring tool, which presented a challenge, the director of Meteorology at the Ministry of Tourism and Environmental Affairs (MTEA), Duduzile Nhlengethwa-Masina, told IPS.

“We’re trying to build in all these elements as part of the review process to ensure that we know who is supposed to do what and how much is needed,” she said.

Under the Paris Agreement, countries revise their NDCs to cut greenhouse gas emissions to limit global temperature rise and implement solutions to adapt to the effects of climate change, every five years.

Although Eswatini is one of the developing countries whose contribution to greenhouse gases is minimal, at 0.002 percent of global emissions by 2010, it is experiencing severe climate impacts such as droughts, hailstorms and floods. About 26 percent of Eswatini’s population was projected to face acute food insecurity between December 2018 and March 2019. According to the Integrated Food Security Phase Classification, poor rainfall, late onset of the agricultural season and prolonged dry spells are some of the reasons households could not meet their needs over the projected period.

Through support from Climate Action Enhancement Package (CAEP), an initiative of the NDC Partnership, 63 countries are given financial and technical assistance to submit enhanced NDCs and fast-track their implementation. Eswatini is one of them.

“The process of NDCs Revision began in May 2020 and the country expects to submit the revised NDC by June 2021,” Pullanikkatil told IPS. 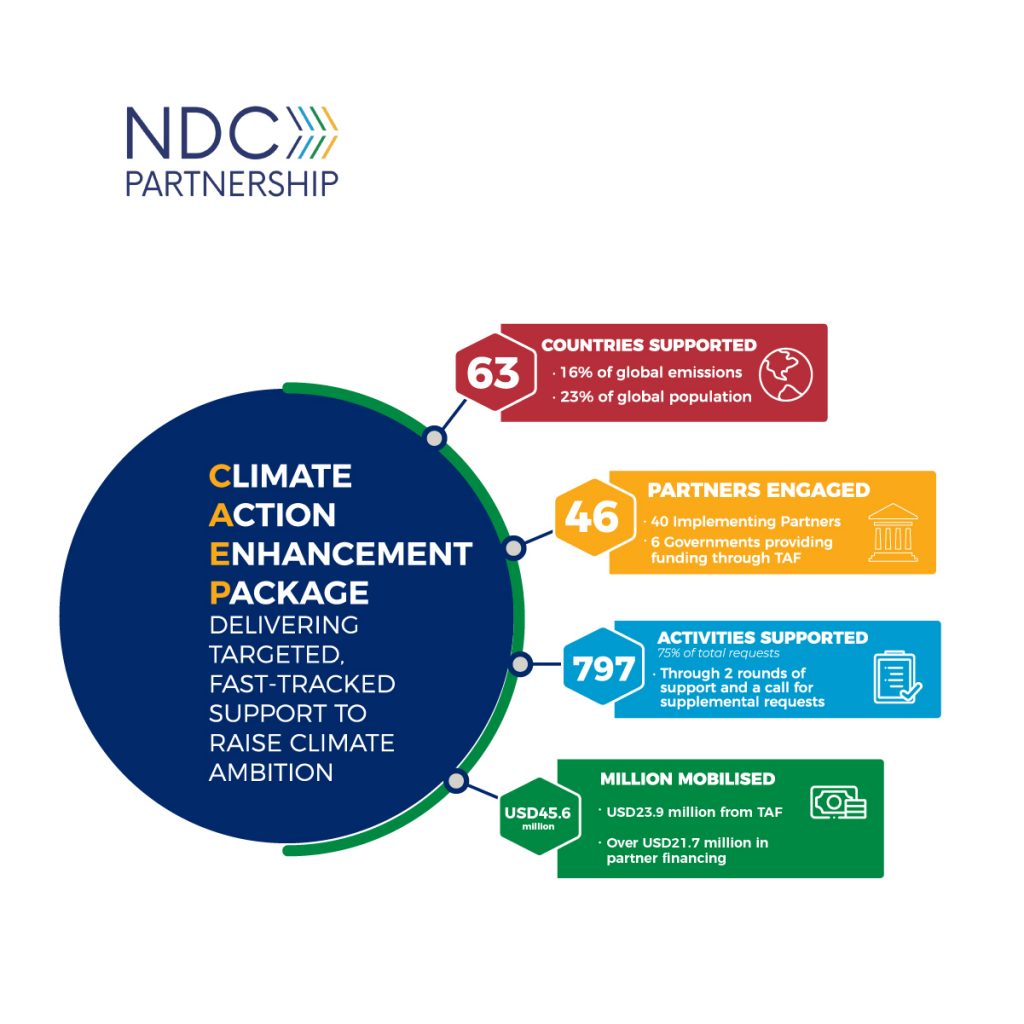 The NDC Partnership has engaged 40 implementing partners as part of its Climate Action Enhancement Package (CAEP) which has provided 63 countries with financial and technical assistance to submit enhanced NDCs and fast-track their implementation. Courtesy: NDC Partnership

MTEA and the Ministry of Economic Planning and Development (MEPD) are spearheading the process.

In its 2015 NDCs, the country had committed to producing the National Adaptation Plan (NAP) by 2020, which will focus on building resilience in different sectors including agriculture, water and, biodiversity and ecosystems, among others.

For mitigation, the country committed to focusing on the energy sector – by doubling the share of renewable energy in the national energy mix by 2030 relative to 2010 levels. Emphasis was also been placed on the transport sector to introduce commercial use of 10 percent ethanol blend by 2030. The country made bigger strides in its commitment to substitute ozone-depleting substances by phasing out HFCs, PFCs and SF6 gases.

Nhlengethwa-Masina said while the country was able to implement many projects in the different sectors of the NDCs, some targets were not met. For example, the country could not complete the NAP by 2020 but she was hopeful that it will be ready by 2021.

“As we submitted the NDCs, we also had statements of conditionality,” she said, adding: “This was relating to the fact that while we commit but we can only achieve the targets on condition that we’re receiving the financial and technological support we need, including capacity building.”

Among the challenges of implementing the 2015 NDC, she cited inadequate investments, limited awareness about the NDCs, policy incoherence and limited involvement of non-state actors.

Rex Brown, a climate change advocate, noted that the private sector – sugarcane, livestock and timber industries – is not engaged in the NDCs process yet climate change has a huge impact on it.

“We can’t allow the private sector to fail but if it continues to bury its head in the sand, then it faces a stuck future,” Brown told IPS, adding: “It’s not only NGOs and parastatals who need to engage with this process.”

Nhlengethwa-Masina acknowledged to IPS the poor participation of the private sector, adding that when invited to meetings only a handful attend and it was usually the same business people time and again.

She said the NDCs process will come up with strategies to stimulate interest from the private sector because it is critical as the climate finance component focuses on it.

Speaking at the launch of the first review of the NDCs last month, the Principal Secretary at MTEA, John Hlophe, said it was everyone’s duty to take climate action, regardless of what sector people came from.

Hlophe, who was addressing experts from the private sector, government and civil society organisations, said the NDCs should be owned by the “whole of government” and the “whole of society”.

“We have to think deeply on how best to implement the NDCs once it is revised,” said Hlophe

Hlophe reiterated the call for renewed efforts made by Moses Vilakati, the Minister of MTEA, a week earlier to political leaders.

Vilakati said, when addressing complex challenges such as climate change, the country needed to bring together the best minds, technical and financial resources that support pragmatic action.

“We can only do this if we join forces,” said Vilakati.

Vilakati said coming up with viable climate adaptation and mitigation strategies in the NDCs will help Eswatini to achieve its national goals such as Vision 2022, its National Development Strategy and the COVID-19 Economic Recovery Strategy because all these goals were threatened by climate change.

The principal secretary at MEPD, Bheki Bhembe, said the National Development Plan 2019/20 – 2021/22 recognises the climate change challenge and is presented as a crucial focus for development planning.

“It is for this reason that the Ministry requested an economic advisor who will work closely with MTEA to strengthen the capacity of central agencies in integrating climate change into national development processes,” said Bhembe.

Bhembe thanked the NDC Partnership for the technical and financial support in the NDCs revision adding that, this time around, the process has improved compared to 2015.