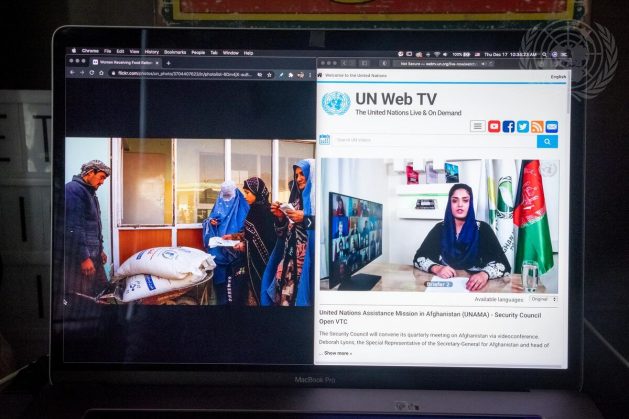 BONN, Germany, Dec 18 2020 (IPS) - While Afghanistan ends a historic year, filled with the hope for peace as the government and Taliban sat down for almost three months of consecutive peace talks for the first time in 19 years, it was also a year filled with violence with provisional statistics by the United Nations showing casualties for this year being higher than 2019.

Yesterday, Dec. 17, in a virtual meeting of the U.N. Security Council, Deborah Lyons, the Special Representative of the Secretary-General for Afghanistan and head of the U.N. Assistance Mission in Afghanistan (UNAMA), praised the peace efforts on the close of “one of the most momentous years that Afghans have endured”, while also highlighting the causalities of the year.

She said that the Afghanistan government and the Taliban had “made incremental but genuine progress in their peace talks”. They agreed on a preliminary deal, reportedly the first written agreement after 19 years of conflict.

“These developments are an early but a positive sign that both sides are willing and able to compromise when needed,” Lyons said.

Talks continued uninterrupted in host country Qatar for almost three months, but are currently in a three week recess.

However, despite the talks, the Taliban has refused to a ceasefire and continued its war on the Afghanistan government.

It was, however, reported this week that a top U.S. general held recent talks with the Taliban in Doha, urging a reduction in violence as this risked the peace process.

Lyons also raised the issue, stating that the “unrelenting violence remains a serious obstacle to peace and a threat to the region.” She added that one Afghan official had told her recently, “the sense and perception of violence and insecurity is higher now that ever”.

While UNAMA is still compiling this year’s data, Lyons provided some provisional statistic on the impact of the violence.

“In October and November, improvised explosive devices (IEDs) caused over 60 percent more civilian casualties than in the same period last year. In the third quarter of 2020, child casualties rose 25 percent over the previous three months; while attacks against schools in this same period increased fourfold.

“In the first 11 months of 2020, targeted killings by anti-government elements rose by nearly 40 percent compared to the same period in 2019,” she said, adding that it was no surprise that the Global Peace Index for 2020 listed Afghanistan as the least peaceful nation in the world for a second year in a row.

She highlighted some of the conflicts experienced over recent months — two separate rocket attacks in Kabul, an attack on Kabul University, and the increased conflict in some areas — and said these served to heighten fears around the emergence of new terrorists threats.

She called for all countries to continue to pressure all parities to the conflict to bring about a sustained reduction in violence. “I except this will be a top priority when the negotiations resume,” she said.

She said that “while it is very difficult to represent a generation born and raised in violence and conflict,” she was honoured to speak on behalf of Afghan youth, including those who were killed in the terror attack on Kabul University and other education centres.

“I have met their families. Their pain is beyond our imagination. I have promised them that I will be their voice and I am fulfilling my promise,” Zadran, who spent her childhood as a refugee in Pakistan, told the Security Council.

“I’m representing a generation who have been the main victims of this proxy war. We are being killed, our dreams are being buried everyday.”

She called for the end to the daily killings of Afghan youth who are a majority of the country’s population as two thirds of citizens are under the age of 25.

“Terrorists are afraid of Afghan youth. And that is why they are targeting our education institutions.

“They know that an educated and informed generation will never allow terrorism and extremism to grown in their country,” Zadran said.

Zadran said that as an Afghan youth representative, her message to terrorists and their supporters was clear and obvious.

“You tried to bury us. You didn’t know that we were seeds.”

Zadran said that the youth supported the end of the conflict through the peace negotiations.

Lyons said Afghanistan’s youth were a key constituency, and were also the most educated generation of youth in the country’s history.

“Young Afghan’s have clear views on the future of their country, and we must do all we can to amplify their voices.”

“Through our youth-focused local, peace initiatives, which are conducted throughout Afghanistan, UNAMA has provided a platform for the youth of Afghanistan to have their say on peace,” Lyons noted.

“Most recently, in the rural province of Faryab, young participants issued their own declaration with strong recommendations, specifying an immediate ceasefire, setting out the role of Islam under Afghanistan’s constitution, identifying the all-important sustainable development goals and emphasising the need for transitional justice.

“These are the young people of Afghanistan, their voices deserve to be heard,” Lyons said, adding that cooperation throughout the region of Central and South Asia will be essential for enduring peace.

Lyons also noted an increasing commitment among regional players for peace in Afghanistan as this was linked to attaining peace within the region.

“Increased trade and connectivity will build the foundation for peace and regional prosperity,” Lyons said, adding it was important to support regional efforts, including the regional efforts on drug trafficking and transnational organised crime as these were considered two serious threats to peace.

Lyons said that any sustainable peace needed to be owned by Afghan’s diverse society. “This is only possible if the process is inclusive from the outset, with meaningful participation by all constituencies, including women, youth, minorities, victims of conflict, and religious leaders,” Lyons said.

She, however, pointed out that the $3 billion raised in financial support for the country during a donor conference in Geneva was remarkable within the context of the current financial environment.

Lyons said that the full security transition, peace negotiations, the health and socio-economic challenges of COVID, the ongoing commitment of the international donors and the expected results of even more regional cooperation meant that Afghanistan would continue to move forward in this new year.

“By all accounts this was a big year. But a bigger year lies ahead,” she said.