152 million children are subjected to child labour. Nobel Peace Laureate Kailash Satyarthi has brought together former child workers, international organisations, global youth, business and education leaders for a global campaign to save them 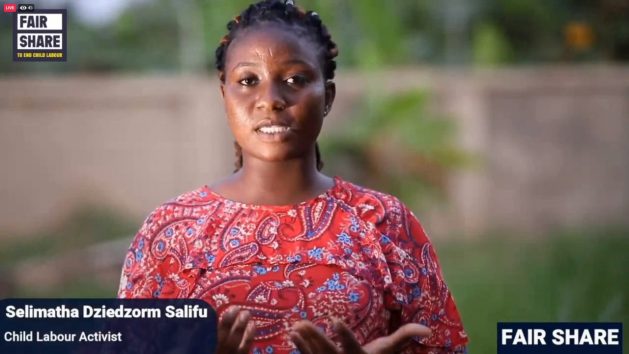 Selimatha Salifu, a former child labourer from Ghana, is now a teacher working with children and encouraging them to continue their education. Salifu is one of two former child activists who addressed United Nations officials, business, faith, union, education and youth leaders from around the world at the virtual launch of the ‘Fair Share to End Child Labour’ campaign on Jan. 21.

UNITED NATIONS, Jan 22 2021 (IPS) - Selimatha Salifu of Ghana is a former child labourer who has vowed to do her part to bring attention to the plight of the world’s over 150 million child labourers. Raised in a fishing community, she recalls her days buying fish to sell, working from daybreak till nightfall to contribute to her family. She credits the General Agriculture Workers Union for rescuing her and ensuring she enrolled in school.

“I’m a teacher by profession now and I work with kids. I want to appeal to children going through the same thing. I was once like them. I want to tell them that they shouldn’t lose their youth and they can have hope that they’ll come out of this successfully. They won’t be on the streets forever. They will not be at the riverside day in day out to put something on the table for their families.”

Salifu is one of two former child activists who addressed United Nations officials, business, faith, union, education and youth leaders from around the world at the virtual launch of the ‘Fair Share to End Child Labour’ campaign on Jan. 21.

The initiative is organised by Nobel Peace Laureate Kailash Satyarthi, founder of the Global March to End Child Labour and decades-long child rights advocate. It demands a fair share of resources, policies and social protection for children, in order to end child labour. The campaign was launched on the same day the United Nations officially declared 2021 as the International Year for the Elimination of Child Labour.

“We have seen that the injustices, inequalities, miseries, denial of education, child labour, sexual exploitation of children, trafficking and so many other problems have been exacerbated during the pandemic, but these injustices were already there,” the Laureate said. “When we call for a fair share, we are calling for creating a new culture of justice and equality.”

The most recent report by the International Labour Organisation (ILO) stated that the challenge of ending child labour ‘remains formidable.’  While almost 100 million children have been saved in the last two decades, 64 million girls and 88 million boys are in child labour globally – almost 1 in 10 of all children. Director General Guy Ryder said the fair share campaign ‘goes to the heart’ of the ILO’s social justice mandate and complements ongoing efforts to achieve Sustainable Development Goal 8.7, which targets the elimination of child labour by 2025.

“We all know that the fight against child labour is complex, the causes of child labour are complex and through this Fair Share campaign, I am convinced that we are doing something very important.”

Director General of the World Health Organisation Dr. Tedros Adhanom reminded the partners that the social and economic shocks wrought by the COVID-19 pandemic point to 66 million children falling into extreme poverty. This is in addition to the estimated 386 million children already in that bracket. He said a campaign like this will help maintain pressure on international organisations and other partners to keep their promises to the world’s children.

“The most disadvantaged children are the most affected, with no access to social and legal protection, leaving them vulnerable to social exclusion and exploitation including child labour. We cannot allow this to happen. We must ensure that these children and their families have their fair share of resources and social protection,” he said.

The Campaign’s Nobel Laureate leader has applauded the young people from around the world who have answered the call to action and are dedicating the time to ridding the world of child labour. The Youth Voice was prominent in Satyarthi’s 2020 100 Million campaign – over 100 young people demanded that world leaders guarantee a fair share of pandemic recovery funds gets to marginalised populations. The youth leaders have confirmed their support for the new initiative.

“We are committing to use our convening power to mobilise our constituents to reach out to their members of Parliament, to their Senators, to their Prime Ministers, to their Presidents, to allocate a fair share of the national resources to end child labour.  I call on everyone, especially young people and students, to join this campaign in whatever small way.  We should not rest until every child is free, safe and educated,” said Peter Kwasi, Secretary General of the All-Africa Student Union.

Other partners at the campaign launch included the United Nations Educational, Scientific and Cultural Organisation (UNESCO) and the Inter-Parliamentary Union, the Organisation for Economic Co-operation and Development (OECD). With former child workers and youth on the frontline and the backing of leaders and international institutions, the campaign is hoping that its demands will see 2021 as a turning point in the history of the movement to end child labour.