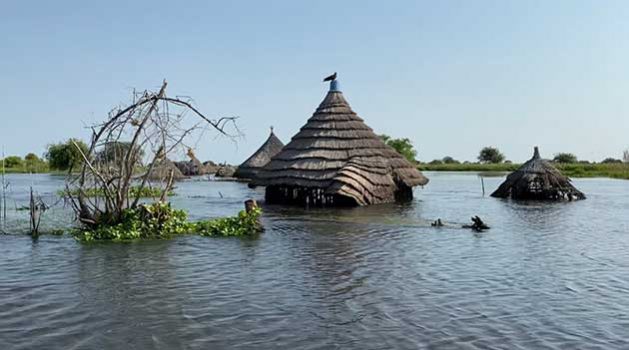 Likuangole in Pibor County, one of the counties that have been hardest hit in the past years due to relentless conflict and organized violence as well as catastrophic floods. Crerdit: Marwa Awad

Likuangole, South Sudan, Jan 22 2021 (IPS) - Located in Jonglei state, one of the most underdeveloped regions of South Sudan, Likuangole is a town badly hit by floods and often battered by conflict. Despite the lack of secondary schools and industry, its residents aspire to transform their lives. But real investment is needed to spur development.

The constant threat of insecurity hangs over the town of Likuangole in South Sudan, with persistent tit-for-tat attacks over land, livestock, water that make peace in the world’s youngest country a challenging prospect in 2021.

It is one of nine towns in greater Jonglei, one of the most under-developed regions of South Sudan. Its people have very few opportunities for economic growth besides cattle and sheep herding, and subsistence farming. Chronic bouts of organized and localized violence fuel divisions between communities.

But this year brought even more suffering as devastating floods swallowed up homes, farmlands and livestock, wiping out harvests and cutting off the region from land access. Farmers see little point in cultivating in the face of such constant setbacks. With their livelihoods destroyed and access to food disrupted, people are pushed ever closer to the brink. 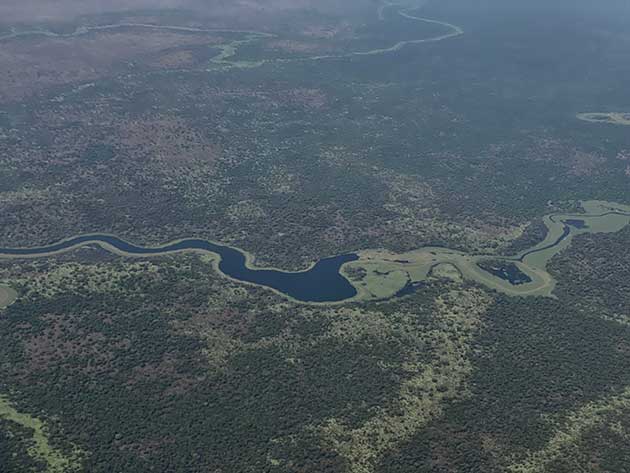 Aerial shot of Jonglei State, one of the most inaccessible and isolated regions of South Sudan. Credit: Marwa Awad

Martha Thiro, 29, says that she never stops worrying. “The women in Likuangole live in continuous fear. The floods may have stopped, the water is subsiding, but I don’t know whether to be happy or afraid, because the end of the floodwaters means violence will return.”

Martha prepares herself and children ahead of these looming raids, which tend to occur at set times in the year. “The children know they must run to the bush and find shelter near trees where the Gul or Lalob fruit grows,” she says. Gul is a bitter-tasting red fruit found in the wild bush. It is used as a source of food for people hiding when the violent attacks occur.

With 26,000 residents, Likuangole is one of 55 hard-to-reach areas where WFP must airdrop food to support isolated populations. Floodwaters and the damage they cause have meant doubling food assistance and extending distributions for longer periods to make up for the scarcity of food grown because of violence and climactic shocks. In the past two months, WFP reached 80,000 people in the Pibor area.

But food aid alone is not the solution for bringing peace to South Sudan. Tackling the deeply rooted isolation and inequity that often breeds conflict, poverty and hunger must go beyond immediate food needs. WFP aims to create an enabling environment for South Sudanese communities through alternative livelihoods that allow people to make a living and live in peace.

Too much time on their hands

To reach the remote town, we took a motorboat across the Pibor river. The skipper checks the fuel and soon we are gliding across smooth waters at speed. Large trees and bushes line the muddy riverbanks. As rays of sunshine glisten on the water and birds soar in the sky, you could almost forget that beneath this beguiling landscape lies long-standing conflict, deep hunger and abject poverty. 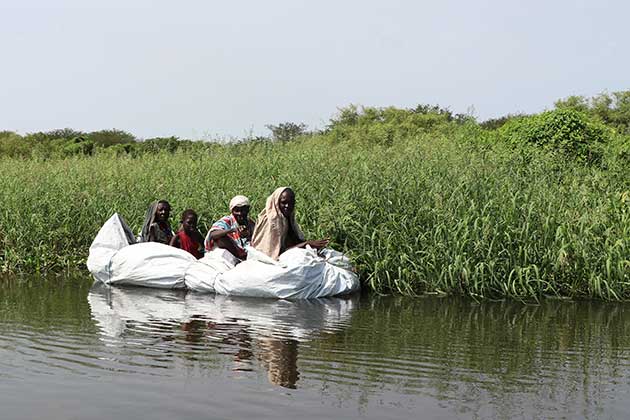 Likuangole’s shore is lined with sinking houses, surrounded by children swimming in murky floodwater to cool off, and women washing clothes. Without any infrastructure, the town is bare, with no clearly marked roads, making movement nearly impossible. Residents use muddy pathways and skirt around puddles.

Surrounded by swamps, pasturelands contaminated with standing water from this year’s floods, and no schools or skills training, young men loiter with very little to do. Bored and restless, they pace up and down the market dirt road. With no work or any social outlet, these young men see no opportunity besides joining gangs to capture cattle from other communities. In this scarce environment, cattle raiding becomes one of few ways to become socially mobile and acquire the social status needed to afford marriage.

Secondary schools or any educational institutions are non-existent, save for one primary school. Illiteracy and the lack of learning means that children are left idle, their potential wasted. “We need schools for the children to learn and have the knowledge to live in a peaceful way,” Martha says. More than 2.2 million South Sudanese children are out-of-school.

At the end of the meagre market is a young man in his 30s who told us that his hometown needs more than airdrops of food. “Can you teach us how to become carpenters?” he asks, adding that woodworking would be a popular source of livelihood for men in Likuangole.

Another man nearby chimes in: “Your food helps us survive, but a job would give us a future.” The residents who were scattered in the quiet marketplace now joined our group and offered more ideas. To avoid the flooded areas they live in, the nearby towns of Boma and Labarab – a two to four days walk – could house the training workshops needed for carpentry. Both towns remain drier than most of their surrounding all year round. 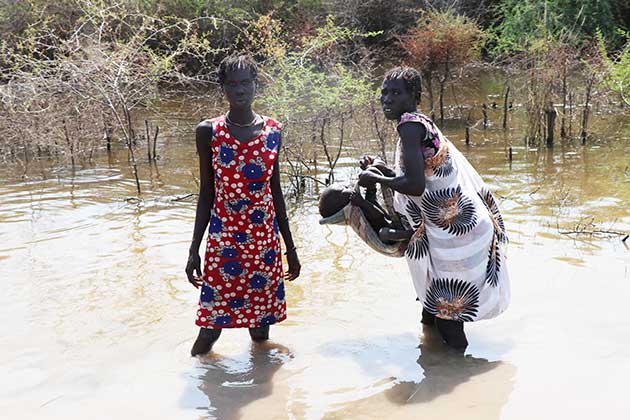 It was heartening to listen to the residents’ aspirations for a better life. Generating more livelihood possibilities in and around remote hotspots such as Likuangole will set the groundwork for self-reliance and stability.

In other less troubled areas across South Sudan, WFP creates alternative livelihoods for young people by training young men and women to build much community assets such as roads to connect their villages to local markets or training in constructing dykes to control flooding. These access roads bring opportunities to isolated communities by linking them to economically vibrant areas.

Investing in such training programmes that teach people the skill of building critical assets such as wells and multi-purpose ponds has helped to reduce fighting amongst communities over precious water resources. These livelihoods opportunities offer dividends. For one, it lifts villages out of isolation and the subsequent poverty that comes when livelihoods are limited or nonexistent. Beyond that, it gives local communities an opportunity to put their heads and hands together and work on a unifying project that benefits the collective, harnessing a sense of connectedness that can be an antidote to violence.

In Likuangole, there is a market for carpentry, the two young men said to me. Basic furniture is needed by families while the forests offer plenty of trees which men and women forage for firewood. A carpentry project as such would engage the idle youth and jobless men, thereby tackling inequity and isolation and giving people the independence to generate their own income. Even in times of desperate humanitarian need and catastrophic food insecurity, these critical livelihoods activities must continue operating. They go hand-in-hand with emergency food assistance in preventing the rapid deterioration of humanitarian conditions. 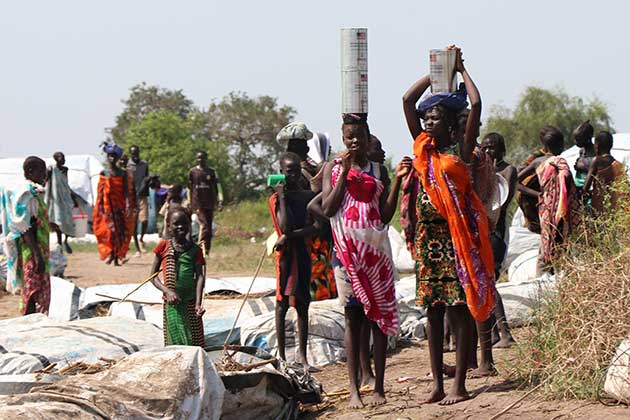 For 2021, humanitarian organisations must go beyond emergency aid and gear up their livelihoods programmes in the Pibor area because of the unparalleled levels of food insecurity there as well as the scarcity of livelihoods opportunities. For South Sudan to thrive, we cannot lose sight of our contribution to peacebuilding programmes which need to grow and remain permanent across the year if we are serious about helping South Sudanese build a prosperous future for themselves.

Bottom line: If donor governments are serious about helping South Sudan, they must invest in early development projects and support WFP’s livelihoods work. Food rations alone will only serve to create dependency, and this is not a sustainable approach to the nascent country.

The writer is an official of the World Food Programme, the 2020 recipient of the Nobel Peace Prize.