Herbert Wulf was Director of the Bonn International Center for Conversion (BICC), from its beginning in 1994 until 2001. He is currently a Senior Fellow at BICC and an Adjunct Senior Researcher at the Institute for Development and Peace, University of Duisburg/Essen where he was previously a Deputy Director. 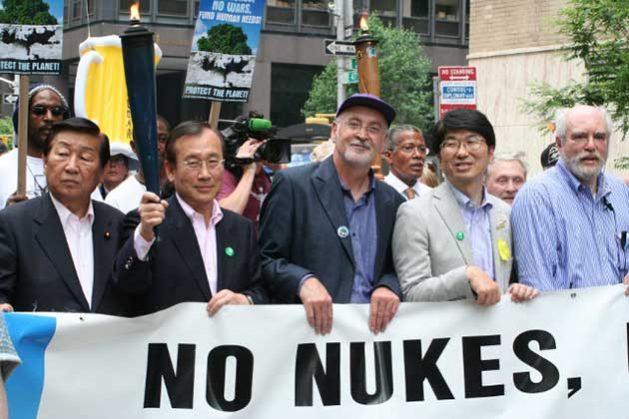 For a long time – and too long for the North Korean government – the issue of North Korea and its nuclear programme has been pushed into the background on the international stage. With the swearing-in of Joe Biden as president, however, it will be on the agenda sooner or later. Credit: UN photo

DUISBURG, Germany, Feb 10 2021 (IPS) - How long can Kim Jong-un wait patiently? After a euphoric start, the Trump administration ultimately proved to be a bitter disappointment for the North Korean regime.

During the meetings between Trump and Kim Jong-un, there was grandiose talk of an imminent deal to de-nuclearize the Korean peninsula. In the negotiations that followed, it quickly became apparent that the two heads of state had simply brushed over the practical problems and fundamental differences of the American-North Korean rapprochement.

For at least two years since then, there has been radio silence. After four years of erratic policy, Pyongyang is waiting to see what the Biden government’s position will be on North Korea. But it cannot expect to receive a quick answer from Washington.

While Biden has years of foreign policy experience, his administration’s first priorities are domestic: dealing with the coronavirus pandemic, the devastating economic slump, deep social divisions, the fight against racism and the consequences of the Capitol riot on 6 January.

It is therefore not unlikely that North Korea – in a manner we’ve seen in the past – will provocatively launch missiles and test nuclear warheads, continue to enrich uranium for nuclear weapons, spark conflict at the inner-Korean border and insult politicians in Seoul and Washington.

With such actions teetering at the brink, the North Korean government has often tried to attract international attention – with the aim of overcoming the economically damaging isolation of the country and easing the sanctions that have been imposed.

For a long time – and too long for the North Korean government – the issue of North Korea and its nuclear programme has been pushed into the background on the international stage. With the swearing-in of Joe Biden as president, however, it will be on the agenda sooner or later.

It is not yet clear how the new US administration will act. Observers are speculating about three different, in some cases mutually exclusive, approaches that the Biden administration could use to address the instability and danger posed by North Korea.

First, the denuclearization paradigm: its advocates argue that North Korea must make preliminary efforts – that is, scale back or at least freeze parts of its nuclear and missile programme – before negotiations can be conducted and sanctions can be eased or lifted.

In the long term, the goal is complete nuclear disarmament. Maintaining pressure and coercive measures, then, is absolutely necessary to persuade the North Korean government to adopt such a policy.

At the same time, this thinking also emphasises military cooperation with American allies South Korea and Japan. In the past, however, maximalist positions have not been able to divert North Korea from its course – not least because China and Russia in particular have only half-heartedly supported the isolation of North Korea.

In North Korea, unrest and impatience are on the rise. The Kim regime no longer wants to be treated as an international pariah.

The second approach provides for gradual nuclear disarmament with a simultaneous easing of economic sanctions. This paradigm reflects that the North Korean regime views its nuclear programme as life insurance and is unwilling to take preliminary steps in arms control or disarmament.

It acknowledges, but does not accept, that North Korea makes policy by means of nuclear weapons. At the heart of this second strategy are reciprocity and simultaneity. Measures would need to be taken to freeze certain nuclear facilities in North Korea while providing humanitarian or economic assistance from the US and other countries, as envisioned in the June 2018 meeting between Donald Trump and Kim Jong-un in Singapore and the February 2019 meeting in Hanoi.

As we know, the second summit in Hanoi was broken off prematurely because of irreconcilable differences. But that does not mean that such a strategy is doomed to fail from the outset.

According to its proponents, a process that is gradually set in motion would be mutually beneficial and would initiate a process of détente step by step. If appropriate confidence-building measures take effect, the tricky situation in Korea could be resolved, as was the case between the East and West in Europe in the 1980s.

The third possible variant is based on maintaining strategic stability – being patient in the name of stability and not to tamper with existing conditions. To put it in a less positive way: ‘Wait and see while doing nothing.’

This was the policy followed by the Obama administration. At the same time, the US attempted to build up international pressure. However, during the eight years of Obama, North Korea succeeded in expanding and modernizing its missile and nuclear programme.

The risks of Biden’s ‘wait and see’ approach

It is not unlikely that the Biden government will again adopt this paradigm. As Vice President, Biden supported this North Korea policy. For the new administration, this would have the advantage of not having to decide on a new policy model – at least initially, as the policy of waiting and doing nothing has implicitly continued for the past two years.

No serious negotiations have since taken place. An additional advantage for Biden would be that he would not have to immediately act in all of the crucial political areas at the same time, and this would allow him to pursue his domestic political priorities.

The big disadvantage, however – as past experience shows – is that the North Korean government will presumably not stand by idly. In all likelihood, it will push forward its missile and nuclear programme with all available means. Relying on its own military means –nuclear weapons first and foremost – is a high priority for the regime.

In North Korea, unrest and impatience are on the rise. The Kim regime no longer wants to be treated as an international pariah. It has only now publicly acknowledged the need for economic reform.

Effective reforms will require an end to isolation and at least an easing of sanctions. Negotiating on an equal footing with Donald Trump was an important symbolic act for Kim Jong-un at the time. It was celebrated accordingly in Pyongyang, even if it ultimately did not lead to the desired change in foreign policy relations.

There is reason to fear that for now, North Korea will not be a top priority in Washington’s foreign policy, nor will negotiations that pursue a strategy of gradual disarmament and rapprochement. Meanwhile, Pyongyang may begin to lose patience. But further missile launches and nuclear tests would spoil the chances for a long-term North Korean policy for the US.