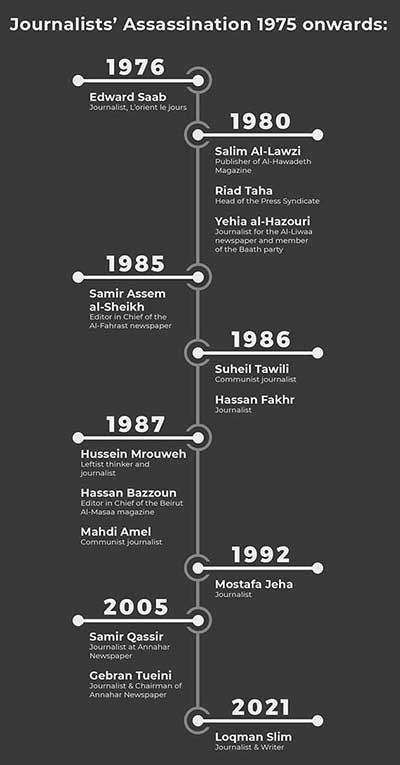 People are often baffled by Lebanon’s complex governing system. This small country was always subjected to sectarian tensions, where different sects historically competed for power. Those ancient tensions had disastrous consequences dragging the country into 15 years of a bloody civil war. In 1989, the Taif agreement ended the war and ensured that this pie, Lebanon, is equally divided among the different sects. Everyone must have a slice of the pie. This fragile power sharing system, led to fragile peace and turned Lebanon in to a victim of political, social and economic paralysis.

State of Freedom of Speech in Lebanon

Free speech has the lion’s share when it comes to hardships in Lebanon. Reporting on issues of public interest, including government policies and legislation and providing unbiased information to the public subjected journalists to intimidation, harassment and violence. In the Lebanese scene, the space for freedom of expression and independent media is dwindling. Attacks on journalists and those who try to shape opinions are seldom investigated and offenders rarely brought to justice. Arbitrary detentions, and kidnappings, ill-treatment and other forms of terrorization are forcing journalists to retreat in the midst of the absence of effective safety training, laws and judiciary measures.

Why are Lebanese Journalists in Danger?

Samir Skayni, a Lebanese journalist who authored the books “Once Upon a Sunday” describe the many aspects of the Lebanese civil war and its aftermath, highlighted in exclusive comments to IPS, the reasons for Lebanese journalists being under threat: “Journalists are at risk in Lebanon given the fields of their interventions, in other words, the sensitive files that they tackle. Journalists are filling the void caused by the reluctance of security and judicial forces to take actions. In addition, when criticizing, any file will certainly affect parties due to the network of clienteles relations and overlapping of parties’ interests within state sectors. Journalists are additionally at risk due to the affiliation of the judiciary sector to political parties, these threats take their toll and enter the realm of benefit without being deterred.” Skayni also defined political assassinations stating: “In principle, political assassinations are rejected. An assassination aims at eliminating an opponent or an enemy. Often, in the Lebanese case, the “opponent” is usually unarmed. The victim is generally opposing the ruling authorities. In those cases, assassinations are not acceptable. Yet, the concept of assassinations is seen as an act of resistance, if the opponent is armed and inflicting hardships on groups and communities.”

Today, the existing press syndicate headed by Aouni Al-Kaaki, represents nothing but the interest of the political elites. All of the journalists and the media workers’ demands are effectively falling on deaf ears. No serious actions have been taken to improve the state of the press, especially in an era where the press freedom in Lebanon is “partially free” according to the Freedom House. In the face of all the assaults, the syndicate was nothing but an idle bystander.

Speaking to IPS, Lebanese civil activist and member of Lihaqqi group Pierre Khoury, stated: “It feels like the Big Brother is watching us. We have reached unprecedented and alarming levels of repression.” He added: “The National Audiovisual Council in Lebanon is completely biased. A few days ago, all TV Station chiefs were summoned to stand before the Council following Journalist Dima Sadek’s episode which tackled the assassination of Louqman Slim.” When asked about potential solutions, Khoury revealed “The solution is to abolish the Ministry of Information. The law does not provide the essential needed protection for journalists, but rather, it transfers any “disturbing” opinion to trial through the Publications Law. Laws are restricting freedom of expression.”

Chrystine Mhanna, Communication and Advocacy officer at the Lebanese Center for Human Rights (CLDH), stated to IPS that the present laws are insufficient. Mhanna said: “the laws are not sufficient, or we would have seen accountability taking place when it comes to assassinations or illegal prosecutions. Alternatives could include having independent investigations when it comes to freedom of expression cases, respecting human rights treaties, having clear policies when it comes to freedom of expression through digital platforms and ensuring that summons and procedures are legal when someone is called for investigation.” Mhanna added, “In a democratic country, freedom of expression laws should only limit hate speech, harm, slander and libel when an actual harm is done, not when the opposing opinion doesn’t appease the authority”.

Media is a traditional agent of social change; it has the power to influence people and shape opinions and attitudes. Media is a also a contributor to values and beliefs and when the media is controlled, the access of the public to information and facts are limited. Consequently, democracy and social justice are doomed. Lebanon is no longer considered as a bastion of freedoms in this region that is filled with censorship and oppression; the country has joined neighboring states in exercising oppression, crushing protests using violence. The right of journalists to execute their work within a safe environment, without facing extensive forms of harassment, attacks and even being killed is a topic of great importance. Today more than ever we ask: When will this nation finally celebrate Justice?