A truck with a crane is positioned next to a house to start drilling a well in search of water, which is abundant under the ground in the Caracas valley. CREDIT: Courtesy of José Manuel García

CARACAS, Mar 4 2021 (IPS) - Thousands of families in the Venezuelan capital have dipped into their savings or gone into debt, in the midst of the worst economic crisis in this country since the 19th century, so that their building has access to a well that will supply the water that has stopped running from the faucet.

“It was hard to find the money, but it was worth it, it has changed our lives; we said goodbye to the jerry cans,” retired high school teacher Cristina Hernández, whose pension is a few dollars a month, told IPS while holding her hands under the water running from the tap in the kitchen of her apartment in the Los Palos Grandes housing complex in eastern Caracas.

Installing a well costs between 15,000 and 25,000 dollars, depending on its depth, the characteristics of the soil, the civil works and the accompanying pumping systems.

“It’s expensive, but we’re talking about water,” Ronny Castro, a user of a well built by 76 families in four adjacent buildings, told IPS. “A tanker truck, with just a few thousand litres per trip, was already costing us 100 dollars each time. We couldn’t live like that, entire weeks without a drop from Hidrocapital,” the state water company.

Over the past two years or more, hundreds of wells have been drilled in the valley and hills of Caracas, home to some four million people – most of the time without a government permit. Estimates of how many wells exist range from a few hundred to several thousand.

“New and old companies are drilling, even companies belonging to people who worked for the oil industry, a world where drilling a water well is child’s play,” engineer José Manuel García, of the specialised firm Servicios Caspian, told IPS.

The valley of Caracas, about 100 square kilometres in size located more than 900 metres above sea level, has a rich aquifer at different depths, fed by rainwater year after year and by the water that for millennia has drained from the slopes of the Avila mountain, which separates it from the Caribbean Sea.

“It’s a very generous aquifer, that was not exploited much until the 1960s, and is now exploited in a rather chaotic fashion by citizens to whom an absent state has failed to guarantee the service,” José María De Viana, who presided over Hidrocapital between 1992 and 1999, told IPS.

For decades, water was a problem in the large shantytowns lining the hills where the poor of Caracas live in overcrowded conditions, and many struggled – often successfully – to get piped water from the State to reach their neighbourhoods. 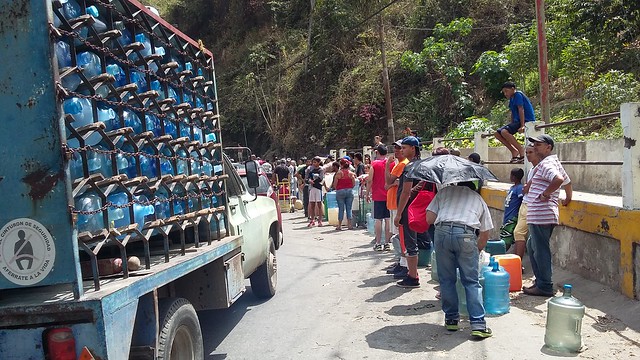 But a lack of piped water was not a problem in the city itself, especially the middle and upper class neighbourhoods that occupied the best land in the large valley. However, this situation gradually changed as the 21st century progressed, and persistent, severe water scarcity became a problem in the last five years.

Water to the south, people to the north

Venezuela is a country of 1,000 rivers, more than half of them of considerable length or flow, and it is one of the 20 countries in the world with the greatest availability of water, some 41,000 cubic metres per inhabitant per year, a volume similar to that of its neighbours Colombia and Brazil.

But most of these surface sources are in the south or run southward, mostly in the basin of the Orinoco, the third largest river in the world after the Amazon and the Congo. 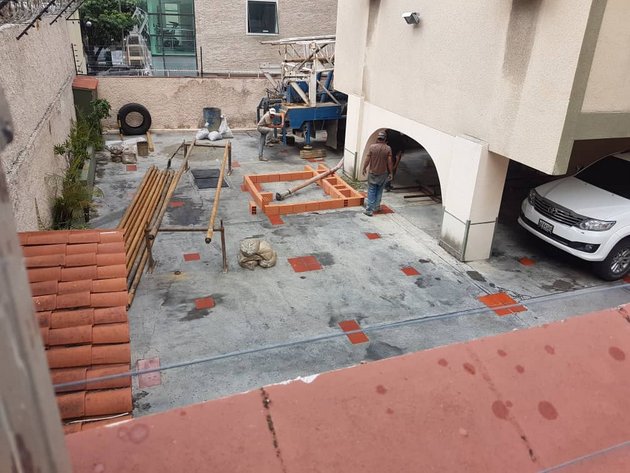 The garage of a residential building keeps from public view the drilling of a well that will supply dozens of homes in eastern Caracas. CREDIT: Courtesy of Ronny Castro

This costly network suffers constant problems, as reported daily by Hidrocapital to its millions of users throughout the north-central part of the country, with unaddressed requests for repairs, replacement of equipment and connections under the siege of the worst economic crisis faced by the Venezuelan State in the last 100 years.

As a result of this deterioration, only half of the 20,000 litres per second that were piped to Caracas in the late 20th century now reach the capital, which means the State is failing to fulfil the commitment it assumed under the 1999 constitution, which guaranteed essential basic services to all households.

Local governments to the rescue

Against this backdrop, the municipal government in Chacao, an emblematic middle-class municipality in eastern Caracas, decided to assist the area’s 80,000 inhabitants in the search for water at the foot of Ávila mountain, where its 13 square kilometres of territory are located.

“If we had a normal water supply this would not be necessary, but given the lack of supply and the needs of the people, we are also digging wells, but without politicking and with permits from Hidrocapital and the Environment Ministry,” Chacao Mayor Gustavo Duque told IPS. 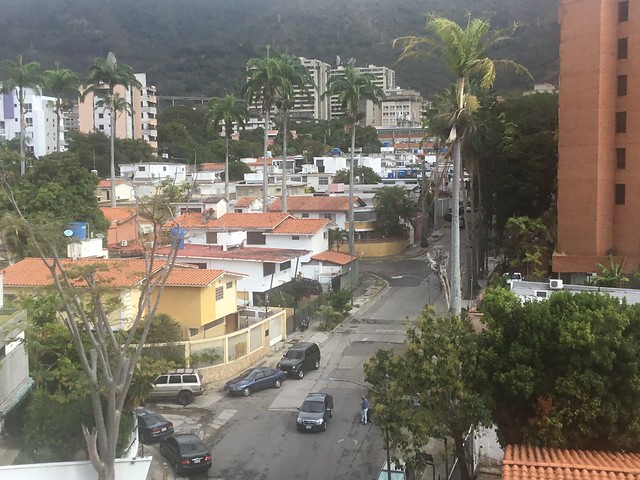 Small blue or black plastic tanks on the roofs of single-family homes are part of the landscape in residential neighbourhoods in Caracas. These tanks, smaller ones installed by some residents inside their apartments, and the mandatory underground or overhead tanks in buildings in the Venezuelan capital, help alleviate the severe irregularity of the piped water supply. CREDIT: Humberto Márquez /IPS

The municipal government has completed nine wells to supply water from public taps or directly to groups of buildings. The most recent one, inaugurated in February, will supply 41 buildings housing almost 15,000 people with 890,000 litres per day. The well could provide water for 30 years.

Digging the well cost 50,000 dollars, and Duque wants to drill seven more. But he faces a major limitation: the municipal government must pay for the wells in foreign currency, in the midst of the rapid and chaotic de facto dollarisation that is afflicting Venezuela, while it receives taxes in the local currency, the bolivar, which is depreciating quickly day by day.

The example has spread and other municipalities in the east of Caracas, Baruta and El Hatillo, which are basically residential and, like Chacao, are in the hands of opposition-leaning mayors who were elected as independents, have drilled or rehabilitated old wells to make taps available in several communities.

The COVID-19 pandemic (in Venezuela there are now an average of 500 infections and five deaths a day, according to official figures) accelerated over the past year the search for water, indispensable for washing hands, one of the main recommendations for curbing the spread of coronavirus, by the residents of thousands of buildings, said engineer Jean Paul Regnault of the Regleef firm.

Regnault told IPS that “this search should be organised, with studies that begin by determining the consumption level of each building or group of buildings to establish the type of well needed, while paying attention to the presence of contaminated water in the upper layers of the subsoil.” 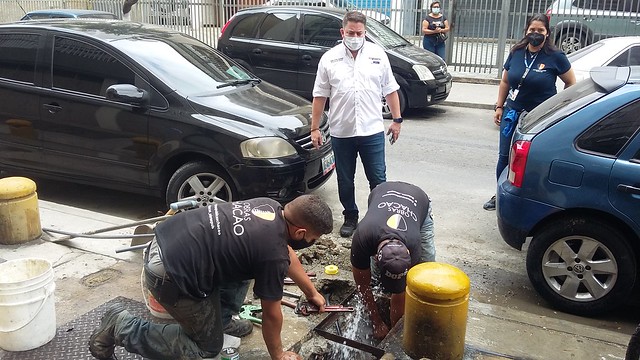 The mayor of Chacao in the east of Caracas, Gustavo Duque, inspects work on a pipe to bring water from a well built by his administration to supply 15,000 local residents. CREDIT: Humberto Márquez /IPS

A well drilled in the old Vargas hospital in central Caracas in search of water had to be closed upon completion because the water found was contaminated with fuel that had leaked for years from a nearby service station.

On the slopes of Avila mountain “we have found water at a depth of only nine metres,” said Regnault. “There may be a large quantity 15 metres down, but the search should not be guided by haste, but by the certainty of finding good water without affecting the environment.”

García stressed that “each plot of land should be studied, because not only privileged areas in the east have good water. There is also water in the west and southwest,” in areas such as El Paraíso, where wealthy families used to live a century ago, and where Hidrocapital operates wells that supply water to tanker trucks for private deliveries or to service low-income neighbourhoods.

Digging the well is not everything, as it requires maintenance. In the complex where Castro lives, each family pays 100 dollars a year. And the well that Duque inaugurated will cost 30 or 40 dollars per family and the mayor said that, although construction was paid for by his office, the cost of its maintenance will fall to the users.

The new status of water from private wells implies a sort of de facto privatisation of a public service, and also marks inequality between those who can afford – with greater or lesser sacrifice – to spend money on a well, and those who cannot.

De Viana also warned of the risk that haste, inexperience or lack of money in many housing complexes could lead to providing water that is not clean. He also underscored the limitations of the “generous aquifer”, which he said could only provide some 2.3 cubic metres of water per second, a tenth of what Caracas needs.

“The aquifer should be a support resource in emergencies, to complement and diversify the available water sources,” he said. “But a permanent system for everyone, which is currently deteriorated but can recover in two years, will always require piping water from the reservoirs.”

Caracas, “like most of our big cities, with the exception of Brasilia perhaps, are like the cities in colonial times: many are on the seashore, far from fresh water sources. We have to bring water to the cities; it’s not possible to move people from the cities to where water is available,” said De Viana.

Hernández, the retired teacher, said “we finally solved this problem, and now I can live in peace. I can’t move to the banks of a river or spend my free time filling up buckets. I hope we have water forever.”