In an interview with IPS, she talked about the various kinds of violence that women, especially Dalit and Muslim women in rural India, had to face when the Government, without warning, announced a nationwide lockdown to contain the pandemic.

“With most menfolk migrating back to their villages from the cities where they had moved to earn a living, the women did not have access to any financial assistance from them which they would earlier use to pay for their children’s education and household expenses,” says Adeeb.

“Women who did home-based work, such as sewing, to make ends meet were also left with no additional source of income, with markets shut.”

“Forced marriages, child marriage and domestic violence were on the rise, and these were cases where we had to intervene immediately,” she said.

Adeeb and her team were in constant touch with women who shared their concerns about how unwanted pregnancies, lack of doctors and health care added to the crisis.

The experiences of these women reflected and continues to reflect the situation elsewhere in the world, and while society was grappling a global pandemic, an unprecedented increase in various forms of violence against women and girls, was being witnessed worldwide.

The United Nations described the increased violence against women in India during the pandemic as a “shadow pandemic“.

While women’s helplines across the country were inundated with domestic violence complaints, the violence faced by women belonging to the most marginalised sections of society needed and still needs urgent attention.

“Reports have shown that incidents of discrimination against women and girls have increased during the pandemic, in particular against women belonging to minority groups, especially those at the bottom of the economic ladder,” says UN Special Rapporteur on violence against women, Dubravka Simonovic, in an exclusive interview with IPS.

She stressed that with many countries reporting dramatic increases in domestic violence, including intimate partner violence and sexual abuse, as a result of complying with social confinement measures, the home had become a place of fear for many women and children. With restricted movement, financial constraints and uncertainty, perpetrators were emboldened, and the situation provided them with additional power and control.

In India, another factor that added to Muslim women’s plight was the rise in Islamophobia, which manifested itself in the online campaign known as the “Corona Jihad”. Muslims were falsely targeted and said to be spreading the virus with the malicious intention of infecting non-Muslims.

The courts dismissed this as being false but not before this dangerous narrative had led to an increase in the already prevalent discrimination against the community.

Media reports showed how women belonging to Muslim communities were denied services at hospitals. The reports gave details of campaigns and calls, at times from those in power, demanding an economic boycott of Muslim communities, which had ramifications for the women. 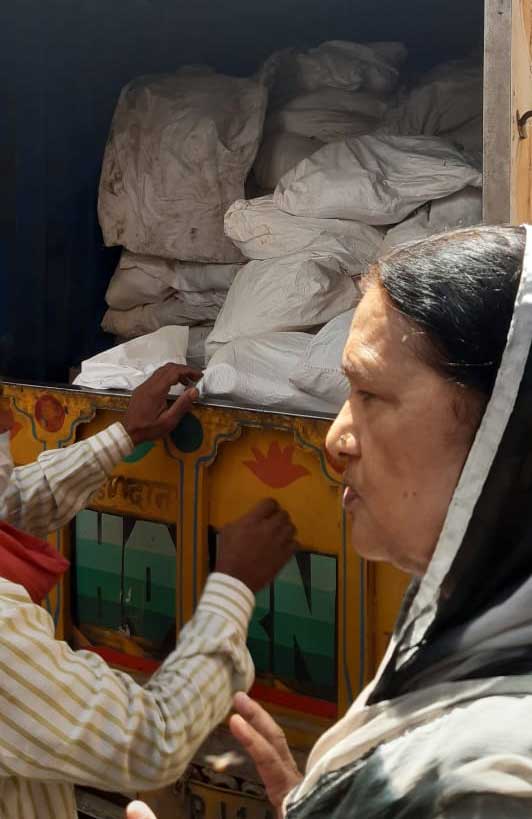 “One of the biggest problems that the women I work with faced was because of their identity as Muslim women,” Hussain said.

With the stereotypes and hate speech against the community, women had to fight their way, battling even the administration at times, to reach out for support.

Most of Hussain’s staff are Muslim women, who volunteered during this time to reach women in areas where basic necessities such as food were not reaching families.

“Access to health, medicines were very difficult, we tried to intervene and provided women and young girls with menstrual hygiene kits. Truckloads of food with the help of well-wishers and friends were distributed to all those in need, irrespective of their religion or identity,” she says.

Addressing violence within families during the pandemic has become vital, and there are many interventions by local and national organisations that are leading this effort.

Breakthrough India, for instance, designed a campaign along with the older adolescents in the field areas by the name of “dakhalandazi zaroori hai” (Intervention is a necessity), which later led to a larger campaign called “Dakhal Do” or “Intervene”.

“Adolescents developed posters against Domestic Violence and displayed them along with relevant phone numbers in prominent places in their villages.

Breakthrough also organised online training of District Legal Services Authorities as well as the Aanganwadi workers for effective response to victims,” said Nayana Chowdhury, who is the director of programs at Breakthrough India.

“Breakthrough also strengthened the skills of the Panchayati Raj Institution leaders to address the needs of the community in the time of the pandemic.

Simonovic stressed that the crisis highlighted and reinforced the gaps and shortcomings at the national, regional, and global levels in preventing and combating the pandemic of gender-based violence against women.

She wants to look at COVID-19 pandemic as an opportunity to bring about the much needed change to overcome the pandemic of violence against women, including women from marginalised and minority groups, by, “amending legislation and practice that reinforces gender stereotypes and prevents victims from accessing justice; changing policies that fail to offer victims adequate and timely services such as shelters, protection orders and help lines; addressing social and cultural beliefs that perpetuate myths that blame women for the violence they suffer”.