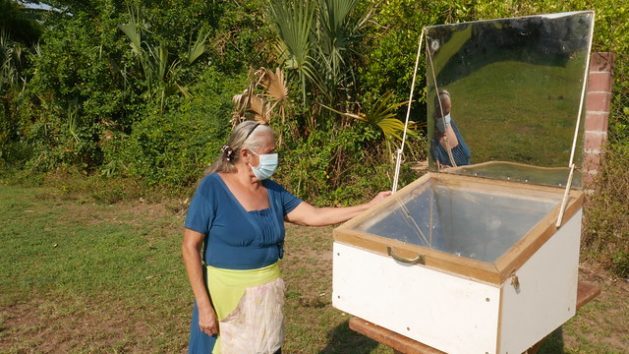 María Luz Rodríguez stands next to her solar oven where she cooked lasagna in the village of El Salamar in San Luis La Herradura municipality. In this region in southern El Salvador, an effort is being made to implement environmental actions to ensure the sustainable use of natural resources. CREDIT: Edgardo Ayala/ IPS

SAN LUIS LA HERRADURA, El Salvador, Mar 31 2021 (IPS) - Salvadoran villager Maria Luz Rodriguez placed the cheese on top of the lasagna she was cooking outdoors, put the pan in her solar oven and glanced at the midday sun to be sure there was enough energy for cooking.

“Hopefully it won’t get too cloudy later,” Maria Luz, 78, told IPS. She then checked the thermometer inside the oven to see if it had reached 150 degrees Celsius, the ideal temperature to start baking.

She lives in El Salamar, a coastal village of 95 families located in San Luis La Herradura, a municipality in the central department of La Paz which is home to some 30,000 people on the edge of an impressive ecosystem: the mangroves and bodies of water that make up the Estero de Jaltepeque, a natural reserve whose watershed covers 934 square kilometres.

After several minutes the cheese began to melt, a clear sign that things were going well inside the solar oven, which is simply a box with a lid that functions as a mirror, directing sunlight into the interior, which is covered with metal sheets.

“I like to cook lasagna on special occasions,” Maria Luz said with a smile.

After Tropical Storm Stan hit Central America in 2005, a small emergency fund reached El Salamar two years later, which eventually became the start of a much more ambitious sustainable development project that ended up including more than 600 families.

Solar ovens and energy-efficient cookstoves emerged as an important component of the programme. 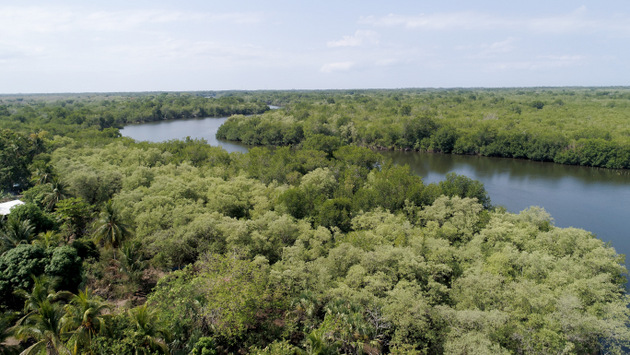 Aerial view of Estero de Jaltepeque, in San Luis La Herradura, a municipality on the Pacific coast in southern El Salvador where a sustainable development programme is being carried out in local communities, including the use of solar stoves and sustainable fishing and agriculture techniques. CREDIT: Edgardo Ayala /IPS

The project was financed by the Global Environment Facility‘s (GEF) Small Grants Programme, and El Salamar was later joined by other villages, bringing the total number to 18. The overall investment was more than 400,000 dollars.

In addition to solar ovens and high-energy rocket stoves, work was done on mangrove reforestation and sustainable management of fishing and agriculture, among other measures. Agriculture and fishing are the main activities in these villages, in addition to seasonal work during the sugarcane harvest.

While María Luz made the lasagna, her daughter, María del Carmen Rodríguez, 49, was cooking two other dishes: bean soup with vegetables and beef, and rice – not in a solar oven but on one of the rocket stoves.

This stove is a circular structure 25 centimetres high and about 30 centimetres in diameter, whose base has an opening in which a small metal grill is inserted to hold twigs no more than 15 centimetres long, which come from the gliridicia (Gliricidia sepium) tree. This promotes the use of living fences that provide firewood, to avoid damaging the mangroves.

The stove maintains a good flame with very little wood, due to its high energy efficiency, unlike traditional cookstoves, which require several logs to prepare each meal and produce smoke that is harmful to health. 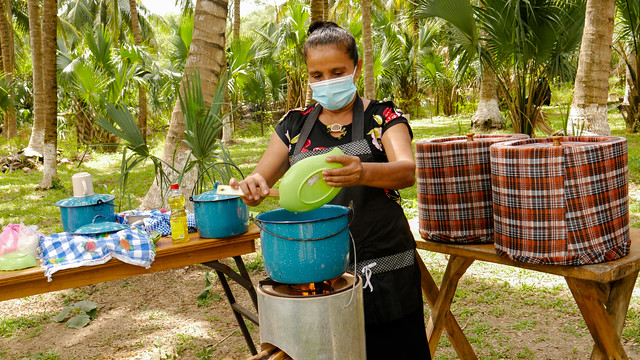 María del Carmen Rodríguez cooks rice on a rocket stove using a few twigs from a tree species that emits less CO2 than mangroves, whose sustainability is also preserved thanks to the use of the tree. Many families in the community of El Salamar have benefited from this energy-efficient technology, as well as other initiatives promoted along the Pacific coast in southern El Salvador. CREDIT: Edgardo Ayala /IPS

The rocket stove can cook anything, but it is designed to work with another complementary mechanism for maximum energy efficiency.

Once the stews or soups have reached boiling point, they are placed inside the “magic” stove: a circular box about 36 centimetres in diameter made of polystyrene or durapax, as it is known locally, a material that retains heat.

The food is left there, covered, to finish cooking with the steam from the hot pot, like a kind of steamer.

“The nice thing about this is that you can do other things while the soup is cooking by itself in the magic stove,” explained María del Carmen, a homemaker who has five children.

The technology for both stoves was brought to these coastal villages by a team of Chileans financed by the Chile Fund against Hunger and Poverty, established in 2006 by the government of that South American country and the United Nations Development Programme (UNDP) to promote South-South cooperation.

The Chileans taught a group of young people from several of these communities how to make the components of the rocket stoves, which are made from clay, cement and a commercial sealant or glue. 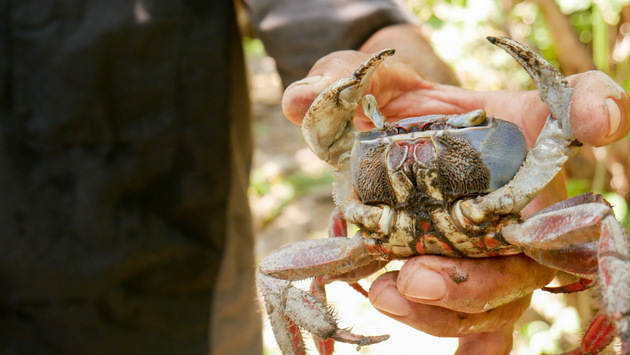 The blue crab is one of the species raised in nurseries by people in the Estero de Jaltepeque region in southern El Salvador, as part of an environmental sustainability project in the area financed by the Global Environment Facility’s Small Grants Programme. CREDIT: Edgardo Ayala/IPS

The use of these stoves “has reduced carbon dioxide (CO2) emissions by at least 50 percent compared to traditional stoves,” Juan René Guzmán, coordinator of the GEF’s Small Grants Programme in El Salvador, told IPS.

Some 150 families use rocket stoves and magic stoves in 10 of the villages that were part of the project, which ended in 2017.

“People were given their cooking kits, and in return they had to help plant mangroves, or collect plastic, not burn garbage, etc. But not everyone was willing to work for the environment,” Claudia Trinidad, 26, a native of El Salamar and a senior studying business administration – online due to the COVID pandemic – at the Lutheran University of El Salvador, told IPS.

Those who worked on the mangrove reforestation generated hours of labour, which were counted as more than 800,000 dollars in matching funds provided by the communities. 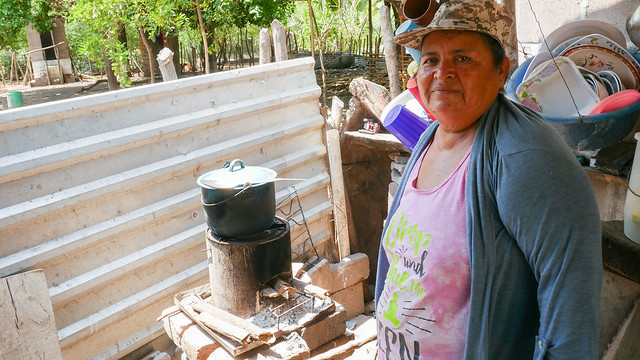 Petrona Cañénguez shows how she cooks bean soup on an energy-efficient rocket stove in an outside room of her home in the hamlet of San Sebastián El Chingo, one of the beneficiaries of a sustainable development programme in the municipality of San Luis La Herradura, on El Salvador’s southern coast. CREDIT: Edgardo Ayala /IPS

Petrona Cañénguez, from the town of San Sebastián El Chingo, was among the people who participated in the work. She was also cooking bean soup for lunch on her rocket stove when IPS visited her home during a tour of the area.

“I like the stove because you feel less heat when you are preparing food, plus it’s very economical, just a few twigs and that’s it,” said Petrona, 59.

The bean soup, a staple dish in El Salvador, would be ready in an hour, she said. She used just under one kilo of beans, and the soup would feed her and her four children for about five days.

However, she used only the rocket stove, without the magic stove, more out of habit than anything else. “We always have gliridicia twigs on hand,” she said, which make it easy to use the stove.

Although the solar oven offers the cleanest solution, few people still have theirs, IPS found.

This is due to the fact that the wood they were built with was not of the best quality and the coastal weather conditions and moths soon took their toll.

Maria Luz is one of the few people who still uses hers, not only to cook lasagna, but for a wide variety of recipes, such as orange bread.

However, the project is not only about stoves and ovens. 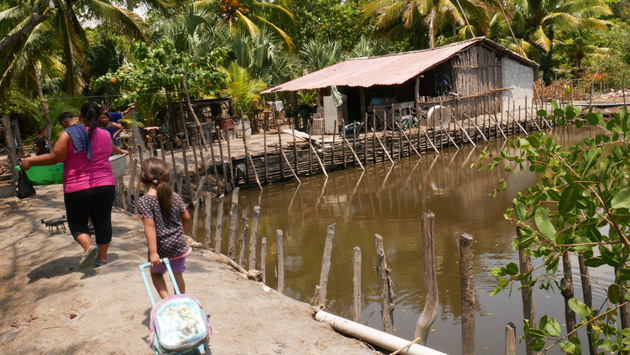 Some families living in coastal villages in the municipality of San Luis La Herradura have dug ponds for sustainable fishing, which was of great help to the local population during the COVID-19 lockdown in this coastal area of southern El Salvador. CREDIT: Edgardo Ayala /IPS

The beneficiary families also received cayucos (flat-bottomed boats smaller than canoes) and fishing nets, plus support for setting up nurseries for blue crabs and mollusks native to the area, as part of the fishing component with a focus on sustainability in this region on the shores of the Pacific Ocean.

Several families have dug ponds that fill up with water from the estuary at high tide, where they raise fish that provide them with food in times of scarcity, such as during the lockdown declared in the country in March 2020 to curb the spread of coronavirus.

The project also promoted the planting of corn and beans with native seeds, as well as other crops – tomatoes, cucumbers, cushaw squash and radishes – using organic fertiliser and herbicides.

The president of the Local Development Committee of San Luis La Herradura, Daniel Mercado, told IPS that during the COVID-19 health emergency people in the area resorted to bartering to stock up on the food they needed.

“If one community had tomatoes and another had fish, we traded, we learned to survive, to coexist,” Daniel said. “It was like the communism of the early Christians.”